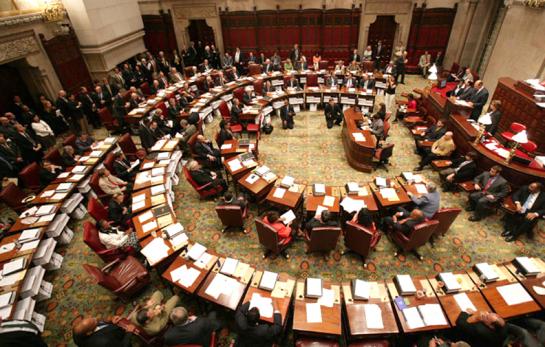 Here's a fact for Ripley's Believe It Or Not: we New Yorkers seem to be feeling a lot better about our state legislature lately. Responding to a Mid-march Sienna survey, 41% of those polled expressed a "favorable opinion" of the Assembly, while 46% were unfavorable. A slightly larger proportion, 44%, expressed a favorable view the Senate, with 46% unfavorable. The gap between those favorable and those not (with those undecided excluded) was within the +/- 3.5% range of error for the poll. Startlingly, this means that a plurality of the state's registered voters may actually hold a positive view of our legislature.

One comparison brings the point home. Public approval of the way the U.S. Congress is doing its job over the past five years as measured by the Gallup poll has ranged between a low of 9% (March, 2013) and a high of 24% (May, 2011). Though the recent trend has been generally upward from the 2013 low point, the March, 2015 level of public approval of Congress's performance was 18%, less than half that for either of New York's legislative houses in the same month.

The highest recent levels of public approval of Congress, which of course has had its own massive troubles with non-performance and corruption, are below the lowest for the New York State Assembly (25%, recorded in August of 2010). The lowest recent approval for the New York Senate (20%) was recorded in August of 2009. Remember 2009? It was the chaotic year in which the Democrats, newly elected to the Senate majority, failed miserably when offered an opportunity to govern. The party's organization of the Senate was blocked by the notorious "Gang of Four" dissident Democrat members, three of whom later went to jail.

It is a massive understatement to note that corruption and ethical lapses in the legislature have not ceased being problems in New York over the past half-decade, the time during which approval of the state legislature has increased. According to Citizens Union's "Corruption Tracker," four legislators left office for criminal or ethical reasons in the 2009-2010 legislative session, three during 2011–2012, and eight during 2013-2014. Currently, four more are facing criminal charges: Republican Senate Deputy Majority Leader Tom Libous, former Democratic Senate Leader John Sampson, Democratic Assemblymember William Scarborough and, most recently and dramatically, former Democratic Assembly Speaker Sheldon Silver.

Increased approval for the legislature side-by-side with persistent corruption: What's going on here? One possible (sad) answer is that corruption is accepted by most New Yorkers as part of our state's political DNA. Preeminent federalism scholar Dan Elazar argued that the Empire State is among those with an "individualistic political culture." Like our neighbors in New Jersey, Pennsylvania and Massachusetts, he thought that we in New York routinely expect our elected officials and others with a foothold in the system to advance their own interests, not some broader public interest. With politics already seen to be about personal gain, it is only a short step to tolerating corruption as a routine part of the game.

New York's feared ungovernability was a framing theme of the 2010 race for governor. Years of failing to meet the April 1 adoption deadline made late budgets a metaphor for state government dysfunction. Governor Andrew Cuomo highlighted the passage of on-time budgets in every year of his first term as evidence of bi-partisan executive-legislative collaboration that had, he said, moved the state from "dysfunction and chaos" to "government that is working."

Because the Assembly missed the mark by about three hours, there has been some caviling about whether the state budget was passed timely again this year. The man in the street would certainly say 'yes, it was.' A second explanation of the legislature's recently healthier poll scores may therefore be that they reflect New Yorkers' reasonable view that the institution lately has actually been performing better. The governor takes the credit but, as John Kennedy once said, "A rising tide lifts all boats."

Earlier this year, stung by the Silver indictment just a day after he had barely mentioned political reform in his State of the State address, Governor Cuomo built an ethics package into his budget, and pledged to give its adoption priority even over achieving timely passage for a fifth year in a row. In reaction, when surveyed by Sienna in February of 2015, New Yorkers said that corruption remained a serious problem, but gave priority to passing an on-time budget over ethics reforms. This highlights a third point. Citizens are making a distinction between good institutional performance and bad individual behavior, and saying that, on balance, achieving the former trumps punishing the later.

Contrary to his initial hard line, in the final budget negotiations Governor Cuomo accepted compromises on his ethics package while again achieving budget timeliness. In reaction, some argued critically that substance was more important than process. They said that the governor traded away too much this year on ethics and a number of other issues to achieve a budget by the April beginning of the fiscal year. This undervalues the long-term importance of demonstrating that government can work, and especially that legislatures can work, in a time of increased skepticism about the viability of representative democracy in New York and across the country.

Albert Einstein once famously defined insanity as "doing the same thing over and over and expecting different results." New York has been incrementally tightening regulations and increasing sanctions to reduce corruption in government for generations, to little apparent effect. Perhaps we should shift our focus to the front end of the process, to altering the expectations of the voters and reforming our deeply flawed electoral process (read: more competition, public financing of elections), and consequently the values and behavior of those we elect.

In our book Tales From the Sausage Factory, my co-author former Brooklyn Assemblymember Dan Feldman reports remembering thinking, when he first entered the historic chamber, "I knew that no one could take my job away from me for the next two years unless I committed a felony, and I knew I was not going to commit one." Electing 213 legislators to the Assembly and Senate with this predisposition would likely solve our corruption problem once and for all, while also assuring an even better functioning legislature.