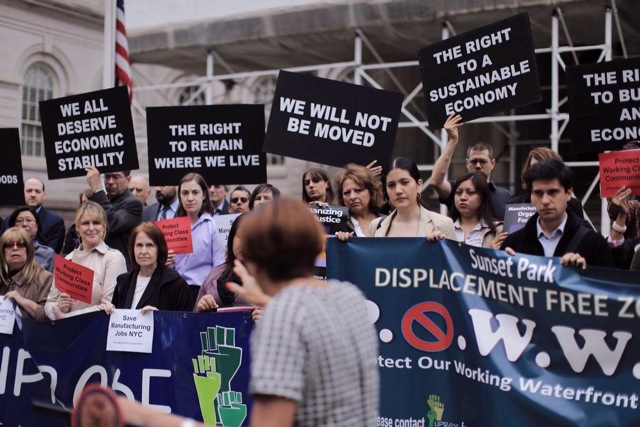 Rally outside City Hall before a land use committee hearing

Since the recent announcement by Jamestown Properties and partners of a $1 billion investment to rebrand and renovate a massive 16-building complex - which will require a rezoning to permit a hotel and academic facility as well as a public investment of $100 million to improve the surrounding streetscape and infrastructure - there has been a steady stream of media accounts of new tech and commercial tenants drawn to Industry City.

While the successful marketing of an “innovation district” has generated much interest and activity, the city has yet to state its policy on industrial land uses contributing to the real estate uncertainty that is threatening Sunset Park’s industrial small businesses including those in the Industrial Business Zone. Heightening real estate speculation is exemplified by the impending acquisition of the 14-acre, M3-1 zoned Sunset Industrial Park by a real estate investment joint venture, which “immediately after closing on the Property, Savoy/601W will begin the design and approval process to rezone this site and to redevelop it into a large-scale residential community“ thereby increasing the site’s value by more than four or five times the acquisition price of $130 million.

When the Mayor was asked to comment on neighboring Industry City’s prior request to use five acres of SBMT for 750 parking spaces to accommodate new tenants and shoppers, he affirmed SBMT would only be used for industrial purposes. While the parking issue appears to have been resolved for the immediate future, a substantive public discussion about the co-existence of an innovation economy district and a traditional maritime-manufacturing hub remain outstanding.

Jamestown Properties specializes in the adaptive reuse of industrial buildings. Its Innovation and Design Building in Boston’s Innovation District is similar to its plans for Industry City. Boston Globe columnist Paul McMorrow in “Old vs. new Seaport needs public debate” argued that for traditional and modern manufacturing sectors to work together, “it will only be after serious coordination, and hard conversations about what industry means in the 21st century.” Although the New York City Council released a comprehensive study of industrial land uses in November 2014, which was followed by a Land Use Committee public hearing in April 2015, Mayor de Blasio and Deputy Mayor Alicia Glen have yet to weigh in on a substantive public conversation about industrial manufacturing and its importance to New York City’s economy.

The City Council report found that the decades-long decline of industrial manufacturing sectors has ended and, in fact, industrial employment grew modestly from 2010 to 2014.  Sunset Park is a prime example of this trend. Based on the New York State Department of Labor Quarterly Census of Employment and Wages, Sunset Park’s industrial firms increased slightly from 1,138 in 2010 to 1,193 in 2014. The number of employees also grew during this period from 10,651 to 11,614 workers.

Although maligned for creating few jobs, warehouses are an important part of an industrial ecosystem and in Sunset Park warehouses employed 103 workers at an average annual wage of $31,236. Representing a third (33%) of the local employment base, this data underscores how traditional industrial manufacturing sectors continue to anchor Sunset Park’s neighborhood economy. These are jobs that have historically and continue to provide opportunity for working class immigrants and workers of color.

In response to a question posed by a Protect Our Working Waterfront Alliance (POWWA) member, Industry City CEO Andrew Kimball discounted community concerns about gentrification and displacement because contrary to “pushing people out”, he claimed the innovation economy is about “bringing people in.” But the real issue may be who is being brought in.

UCLA geographer Allen Scott argues that innovation districts are enclaves that represent a “privileged foci of production, work, and social life.” A mundane illustration is the branding of Industry City’s Food Hall, which is not called a food court because the term conjures up a shopping mall – the quintessential symbol of mass consumption.  Affluent consumers desire a unique experience in “great gathering places,” according to developer/architect Young Woo, who is “curating” a mix of retail tenants in refurbished shipping containers on Manhattan’s Pier 57. Clearly, an innovation economy is not just a reference to a mode of production but connotes a cultural milieu and aesthetic deemed creative, hip, and artisanal.

On the day of the City Council Land Use Committee hearing, POWWA – a citywide alliance which includes UPROSE, Neighbors Helping Neighbors, Teamsters Local 812, Trinity Lutheran Church, and the New York City Environmental Justice Alliance – held a rally at City Hall where elected officials and advocates addressed the importance of preserving and protecting industrial jobs for working class New Yorkers. A Crain's article in March indicated that Mayor de Blasio was soon to announce his industrial manufacturing policy but that has yet to happen. In the meantime, the lack of an engaged public conversation about 21st century industry is contributing to speculative real estate activity and rising rents threatening Sunset Park’s viable industrial manufacturing ecosystem.