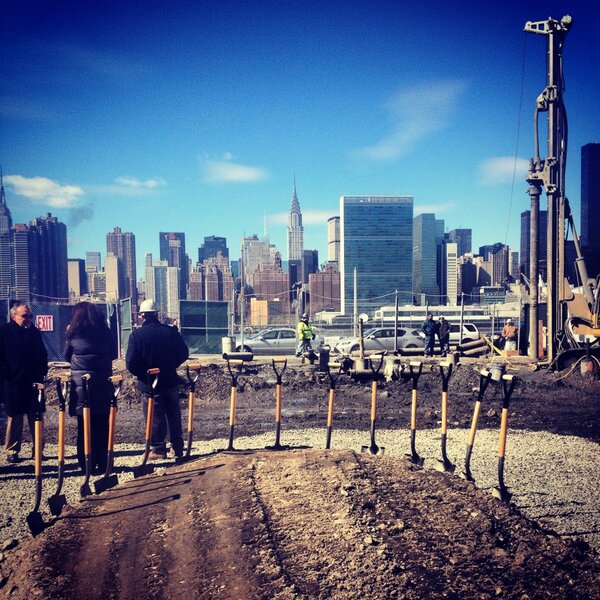 A ground-breaking (photo via @NYCMayorsOffice)

New York City is in a housing crisis, you've surely heard, or seen, or felt. Rents are headed skyward, the homeless shelters are bursting at the seams, and formerly poor and neglected neighborhoods are filled with bearded hipsters drinking craft beers.

For poor people, housing is almost impossible, but for persons in recovery from addiction—or on parole or probation—the challenges are multiplied many times. Felons cannot live in public housing, for example, and the job prospects for someone with a criminal record are very limited. Sobriety is difficult to maintain in the best of circumstances, and stability and peer support are essential.

So what's a poor addict to do? So-called "three-quarter houses" have risen to meet the demand for housing but they are, in some ways, worse than living on the streets. Three-quarter houses can be loosely defined as shared housing for persons in recovery who agree to split expenses and live without illegal drugs or alcohol. They are less restrictive than halfway houses which have strict rules, are usually for felons only, and have paid staff from a managing agency (often the Department of Correction) onsite 24 hours per day.

In New York City, the variant on three-quarter houses that has taken root is unusually predatory and grim. The New York Times has published several articles on these flophouses—a more apt description—where slumlords gouge recovering addicts and former prison inmates for their welfare benefits, house them six to a room and take kickbacks from the treatment programs that the men (mostly) are required to attend.

When a resident completes a drug program they are urged to relapse and be readmitted to a treatment facility, so the landlord can continue getting his kickback. The directors of Narco Freedom, a major provider of substance abuse treatment and three-quarter housing with multiple sites in New York City, have been arrested and indicted on medicaid fraud, and the organization is teetering on the edge of bankruptcy.

The city made a public relations show of closing down a few of these unlicensed and unregulated abominations, but there are hundreds, according to estimates. And there is an endless supply of people seeking cheap and sober housing; the War on Drugs has not abated the number of sufferers but has produced a bumper crop of convict-addicts seeking shelter as they stream out of the jails and prisons.

An estimated 25,000 people are released from New York prisons each year and another 81,000 from New York City jails. Without adequate housing, an addict's chances of staying sober and avoiding criminality are drastically diminished.

There is, however, another model for three-quarter houses that works - and I know from having lived in one.

I spent two years—after a long saga of depression, addiction, incarceration, and treatment—in a three-quarter house run by the non-profit Oxford House group, which manages thousands of such houses nationwide.

Each Oxford House is run on a cooperative basis by its residents. Paid staff manage the start-up phase of each house by finding a rental unit, negotiating a lease, making the upfront payments, and finding the first cohort of tenants. Once established, the tenants pay equal shares toward the rent and utilities, set house rules, assign chores, choose officers, and manage the house on a democratic basis.

Attendance at a treatment program (of the tenant's choice!) or at 12-step groups is a requirement, and if a person relapses the result is an immediate eviction.
The Oxford model is well-established in several states. In New Jersey, for example, there are about 120 houses but it has not caught on in New York (the website lists 17 total houses statewide).

The basic model is simple and any not-for-profit serving these populations could start a three-quarter house by investing a few months of rent upfront. In fact, payback of the initial investment, through small monthly payments from residents, can be part of the model so it need not cost the sponsoring agency a dime.

The basic model can be modified depending on the sponsoring group and the needs of the particular population. For example, the monthly welfare allowance for shelter is reported to be $215 per month per person. It is a low number and it may not be possible to operate a sober house with, say, ten residents, a typical number for the private houses, if all are on welfare. It is likely that a mix of private, paying residents and welfare residents would be required. Otherwise, a small subsidy from the sponsoring agency might be necessary.

Three powerful and intertwined forces—the housing crisis for the poor, the depopulation of the prisons, and the substance abuse epidemic—have combined to create a demand for affordable housing for these often comingled groups. Three-quarter houses, managed responsibly, are one of many answers that are needed.
***
Christopher Beall currently works for the Osborne Association, a nonprofit criminal justice reform group in the Bronx.