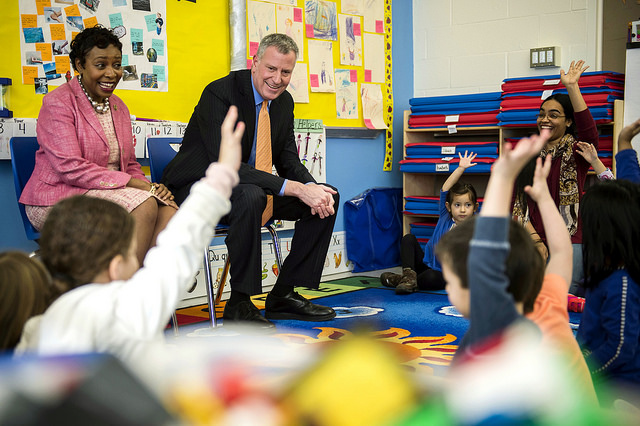 Circle time at preschool teaches much about civility and unity, how best to contribute to a pint-size society.

So when little Lela whispered from the corner, "I'm ready to come back," teacher Katie Wassel in Washington Heights figured lesson learned, the 4-year-old rejoined a tight crescent of fidgeting peers seated on a colorful rug. You can't elbow your neighbor at circle time.

Hillary Clinton draws a wide and inclusive circle all her own, pitching fresh entitlements to ease the financial angst of families – parental leave, universal pre-kindergarten, tuition-free community college – and nudged leftward by young voters, many women, Senator Bernie Sanders, and diehards who continue to 'Feel the Bern.'

Fiscal conservatives warn of ballooning costs for existing social guarantees. But a thornier question confronts Democrats: Might they inadvertently worsen inequality, rather than close disparities between poor and well-heeled families?

Take Mayor Bill de Blasio – poster boy for novel entitlements – and his well-meaning spread of free pre-K for all families, no matter how rich or poor.

His original yarn was a tale of two disparate cities. "The best and the brightest are born in every neighborhood," he declared after winning election, seeking to narrow early gaps in children's learning. A half-century of research findings does show that quality preschool can lift impoverished children.

But Mr. de Blasio pushed for a universal benefit, crawling out on a thin policy limb, ignoring three national studies, including my own with Stanford economist Susanna Loeb, that discern just minuscule and fading effects of pre-K for children from better-off families.

Why? Because most middle-class parents – two-thirds of whom nationwide already enjoy access to pre-K – offer important nurturance at home as well. And if the mayor's pre-K proves to elevate all kids, how would this narrow gaps in children's early growth?

The mayor's fuzzy logic reveals a deeper dilemma for Mrs. Clinton and Democratic candidates: How to rekindle opportunity for the middle class, while delivering on their perennial promise to lift the poor.

White Americans have seen their earnings slip by 3 percent since the late 1990s, falling to $60,300 in mean wages last year. But total income ticked upward, thanks to middle-class tax cuts and rising aid for health care, says the Congressional Budget Office. In stark contrast, nearly 24 million children under age six live below or near the poverty line. Affordable pre-K remains out of reach for half these families.

More than 103,000 four-year-olds populate New York City and are eligible for preschool. Mr. de Blasio has added more than 38,000 full-day pre-K seats citywide, totaling more than 68,500, many in depressed parts of the city. But over 30,000 potential preschoolers remain outside any public program, two-fifths being raised in the city's poorest neighborhoods.

Entitlement hawks also teach us that one size can't fit all, especially when serving the nation's kaleidoscopic variety of families. At first Mr. de Blasio aimed to mainly enlarge the count of preschool seats in city schools, pleasing the teachers union but stirring protests from the city's 1,900 private, mostly nonprofit pre-K's, which have resisted cookie-cutter programs for over a century.

Take parents who prefer half-day pre-K, allowing quality time at home for parent and child, but who now lose their subsidy, given the mayor's insistence on full days inside classrooms. Jewish educators seek more instructional time to advance religious teaching. Charter schools last month appealed Albany's siding with the mayor that he, not charter authorizers, can regulate independent pre-K programs.

New York's experiment also reveals the risk of obsessing on what's new and shiny when regimented entitlements arrive. The mayor largely ignored existing supply, incenting middle-class parents to migrate into tuition-free preschools. This emptied up to 14,900 children from older programs, rather than widening access - what economists dub a substitution effect. "We lost two full classrooms of 4-year-olds," said Don Williams, manager of a Midtown pre-K.

President Obama and Republican governors, like Michigan's Rick Snyder, dodge the risks of unbridled entitlements, opting to expand pre-K access for poor youngsters, while easing middle-class costs via tax credits. A rising count of companies, from Netflix to Goldman Sachs, help shoulder the burden of essential human supports: from paid leave for parents nurturing a newborn to insuring security in old age.

Instead, untethered entitlements go awry when benefits tilt toward better-heeled players, say how price supports for farmers became welfare for the well-off, or when taxpayers underwrite pre-K or high-priced universities for parents who can afford to pay.

The campaign season may prompt serious debate over the future of entitlements, along with how to bolster working families. But as Mrs. Clinton and leading Democrats embrace new social guarantees, pursuing middle-class voters, they should be honest about who they aim to buoy and who they would leave behind.

***
Bruce Fuller, professor of education and public policy at Berkeley, is author of Organizing Locally (University of Chicago Press).