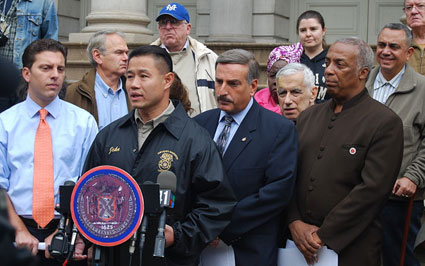 Photo by Thomas Good / NLN
Eric Gioia, John Liu, David Weprin and Charles Barron -- then all members of the City Council --held a press conference to oppose extension of term limits in October 2008.

(This is the second article in a series of commentaries Gotham Gazette will run between now and Election Day on the charter proposals appearing on the November ballot.)

The issue of term limits has been a political hot potato in this city for the past 20 years. It has pitted the public against their elected officials and done significant damage to our democracy in the process. The latest chapter in this story will take place on Nov. 2 when voters will yet again get an opportunity to decide whether they want their city elected officials to have two or three terms.

That question and a number of others were put on the ballot by a Charter Revision Commission appointed by Mayor Michael Bloomberg this past March. The Charter Commission was created in the aftermath of the controversial decision by city elected officials to extend term limits to three terms in 2008. This action overturned the will of the people as expressed in two public referendums on the subject. In the first referendum, in 1993, the voters overwhelming expressed their support for a two term limit for all city elected officials. Not satisfied with that answer, the City Council in 1996 put another referendum on the ballot that would extend term limits to three terms. The voters soundly rejected that suggestion.

Although the term-limits issue will appear on the ballot as a single measure -- Question 1 -- actually is comprised of three separate questions, not one. The Charter Commission lumped them together as one question due to space limitations imposed on us by the Board of Elections. (The board has subsequently denied any such limitations, but that's the subject of another story.) The three parts of Question 1 attempt to address the public's request for a final, binding say on the issue of term limits for city officials. My belief is that we went a long way toward accomplishing that goal, but we failed to finish the job.

This is the third in a series on the questions on the City Charter that will appear on the Nov. 2 ballot> The other stories so far:

Keeping the Clout: Despite pleas to limit the mayor's power, the city charter commission opted to increase it in at least one area, Glenn Pasanen contends.

I believe that we did get it right on the first two parts of Question 1. Part one of the question gives voters the chance to decide whether we should return to a limit of two terms for all city elected officials. If the electorate rejects going back to two terms, then the current three-term limit will be retained. Part two of Question 1 would prohibit the City Council from altering the terms of elected officials currently holding office. This means that council members can only modify the term-limits law for future city officials, and not for themselves. In many respects, this closes the "loophole" that caused so much public outrage in 2008.

But it is part three of Question 1 that sparked the most debate and disagreement within the Charter Commission. That part provides that the proposed change back to two terms would apply only to city elected officials who were first elected at or after the 2010 general election. In other words, all incumbents who are not already in their third terms would be "grandfathered in" and will have the opportunity of serving three terms. Since the next City Council election will not take place until 2013, the two-term limit would not fully take effect until 2021.

It's my contention that this essentially creates a new "loophole" that will only perpetuate the public's lack of faith in government. It is also logically inconsistent with the other parts of Question 1. If we are providing the public with an option of two terms because of the outrage and loss of trust that was engendered by the 2008 change, then why would we extend this questionable windfall?

As stated in a Minority Report that I authored along with two fellow Charter Commissioners, "The 2008 change from two terms to three was made effective immediately. The change back from three to two -- if the voters approve it -- should be no different. Elected officials are not entitled to a certain number of terms. We see no justification for exempting any elected official from the two-term limit, should the voters reinstitute one."

I am not an advocate for government by referendum. We have all seen the chaos it has caused in California. We live in a representative democracy, and it works well for the most part. However, there are some areas of government that are so vulnerable to self-interest and self-dealing that the only way to bring about change is through a public referendum. For example, the City Council can currently raise its own pay. How many people believe it should have that right or that it will ever give up that power on its own accord? Similarly, incumbents will never willingly reduce their own terms, even if it means defying the will of the people who elected them.

That is why despite my own reservations about the effective date of the term limits provision, I strongly support it and urge voters to vote yes on ballot Question 1. It's an important first step toward reversing what happened in 2008 and restoring some of the trust that was lost along with it. Hopefully in the next year either a new charter commission or a public referendum will eliminate the exemption for incumbents and finish the job we started.

Anthony P. Cassino, a lawyer who lives in the Bronx, was a member of the 2010 Charter Revision Commission.