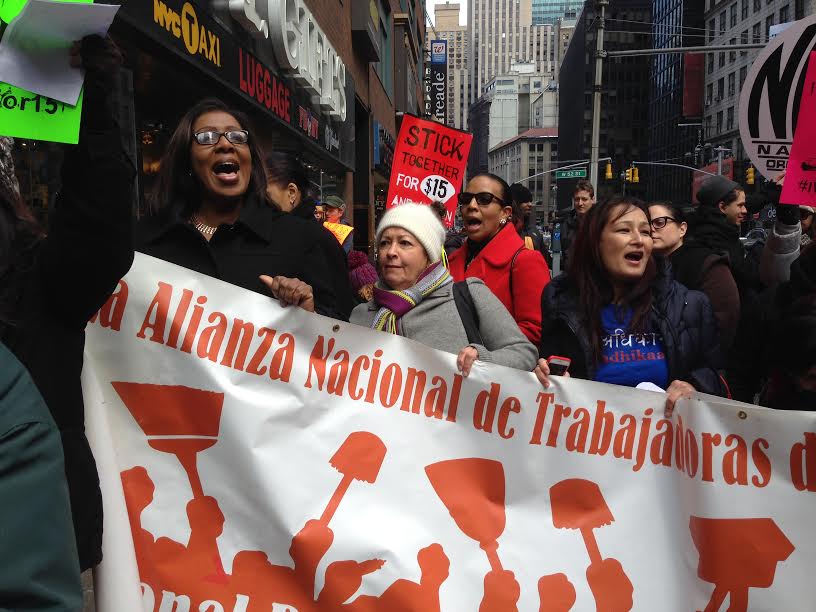 Letitia James, the author, at a rally

Across the country, retail businesses are taking their cues from Walmart, in a race to the bottom that New Yorkers must reject. Even though Walmart’s efforts to open stores in New York City have been consistently thwarted by intense worker opposition and community organizing, the worst effects of the company’s decisions are still felt.

Here’s why: Walmart is the largest private employer in the United States, and the largest retailer in the world. The company sets the standards for the entire retail industry. Retail is a massive, growing sector of our economy where many women, people of color, and immigrants are struggling to make ends meet.

Given its unparalleled size and influence, Walmart has a unique obligation to create higher standards for jobs. Instead, Walmart continues to set a terrible precedent for retail employers in our city and nationally, driving down wages and increasing economic insecurity for countless working people.

Earlier this year, with no advance warning, Walmart announced that it was closing more than 150 stores across the country, and putting an estimated 10,000 people out of work. This announcement came after Walmart had made promises of creating permanent jobs and helping to strengthen neighborhoods.

Communities always lose more than they gain from Walmart. Every time Walmart closes stores, cuts jobs, slashes hours, or mistreats employees, it has a huge ripple effect in communities and markets across the country. Retail workers are often left more vulnerable and worse off as a result.

Keeping a physical presence of Walmart out of the five boroughs has been a major victory for our city, but the unfortunate reality is that retailers here often emulate Walmart’s harmful practices. And Walmart will continue to look for ways to enter the New York City market and reach customers here, including luring City taxpayers to neighboring stores in Valley Stream and Westchester with appealing low prices.

It’s time to insist that Walmart’s low-road business model is just as unwelcome here as its stores.

Low wages, part-time hours, and erratic schedules are increasingly common across the five boroughs. Walmart workers this year will earn an average starting wage of $10 per hour – and too many retailers here are following Walmart’s lead and paying workers the same poverty wage or even less.

Ten years ago, Walmart was an early pioneer of so-called “flexible scheduling” – a now pervasive employment practice in retail that subjects workers to constant changes in their hours and near total company control over employees’ lives and time. This is why so many retail workers are always on-call, expected to come to work at a moment’s notice, yet do not have the security of a steady full-time job.

Consider Melody, a mother living in Brooklyn with a five-year-old son. Melody works in retail and is also taking part-time classes to become a midwife. Because of her unreliable work schedule, and recent cuts to her hours, she is unable to afford childcare.

Melody is just one of the many New Yorkers in our city trying to improve their lives and get ahead, but facing major barriers.

Every day, I hear from these men and women: from the single mom in Queens working forty hours a week at a retailer who regularly skips dinner so her growing children can eat; from the young man in the Bronx who walks to his supermarket job because he can’t afford a metrocard; and from the senior in Brooklyn who is unable to retire from her minimum wage job because she has no savings.

Living wages, reliable hours, and basic respect and dignity on the job are noticeably absent in the Walmart economy – an economy that doesn’t want workers, especially moms like Melody, to win.

In the months and years ahead, New York City will have to choose between a high-road retail economy that lifts up workers and the Walmart economy that drags workers down. This crucial choice will need to be made as more retail jobs are created in neighborhoods throughout the five boroughs. Indeed, many new residential developments will include large retail stores as anchor tenants on their ground floors.

A starting wage of $15 per hour, stable full-time schedules, real respect on the job, and full acknowledgement of the right to organize are the bare minimum that Walmart must offer.

That’s why I am proud to join retail workers, the Fight for 15, and many other voices of justice in demanding an end to the current Walmart economy - an economy that leaves workers and communities behind.

This growing movement just scored a major victory in New York, with Governor Cuomo and the state Legislature agreeing to raise the minimum wage to $15 an hour. As part of this movement, we must and will continue to insist that Walmart, and all the retailers that follow its low-road example, remain unwelcome here. Our communities deserve better.