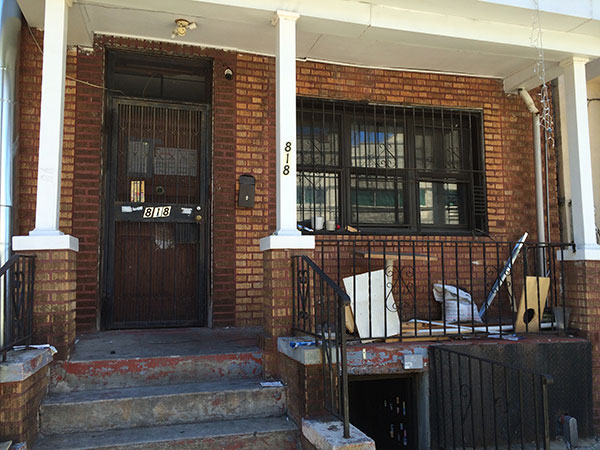 A home that has been illegally converted (photo: Tarry Hum)

Described as “a secret world of New York City housing” by The New York Times, several actions by the Department of Buildings (DOB) this summer exposed the ubiquity of illegal subdivisions in South Brooklyn’s immigrant neighborhoods.

Two August incidences within a two-block area near 70th Street and 7th Avenue in Dyker Heights received local media coverage while the raid of 818 55th Street in Sunset Park was reported only in the Chinese language press. In each case, a two family home was illegally subdivided to house multiple families including those with children.

The Sunset Park property was divided into 25 single room occupancy (SRO) units. According to one media outlet, Kings County Politics, these incidences “lend credence” to City Council Member Vincent Gentile’s ongoing efforts to pass legislation to impose severe civil penalties on “unscrupulous landlords” and expand the authority of DOB and the Environmental Control Board to inspect properties and issue fines and other penalties.

Earlier this summer, Council Member Gentile introduced his most recent bill, Intro 1218, co-sponsored by Council Members Williams and Grodenchik with the strong support of Brooklyn Borough President Eric Adams and members of the New York State Assembly and Senate.

Illegal subdivisions are long standing and fairly pervasive in immigrant neighborhoods.  While there is no question that illegal conversions create substandard, unsafe, and overcrowded conditions that strain public infrastructure including transportation, utilities, and local schools, illegal SROs and basement units are often housing options of last resort for the city’s working poor.

A 2008 Pratt Center and Chhaya CDC study estimated that hundreds of thousands of New Yorkers live in illegal subdivisions or “phantom apartments.” In fact, MFY Legal Services attorneys argue, “the City depends on illegal SROs to ward off a homeless crisis that would ‘dwarf’ anything seen before.” Council Member Gentile and his co-sponsors seek to punish landlords who construct illegal and unsafe subdivisions and the provisions of Intro 1218 may be more effective in protecting and preserving the residential character of low-density neighborhoods than addressing the housing crisis faced by working poor New Yorkers.

Leading the charge for greater DOB enforcement and civil penalties for offending property owners are Community Board 10, Dyker Heights Civic Association, and Brooklyn Housing Preservation Alliance. Their well-attended town hall in February 2015 held at the Bay Ridge Knights of Columbus provided an opportunity for numerous residents to vent their long-standing anger and frustration. Most recently, these groups participated in a three-part informational series on illegal conversions produced by a Chinese language media outlet.

While the rationale for legislative action is framed around public safety due to potential hazards for emergency responders and tenants, and concerns about strained public services and infrastructure, Brooklyn Housing Preservation Alliance’s Bob Cassara made clear that the grievances are not just about public welfare and overcrowded schools. He asks, “Why do people want to live here? Why are those houses multi-million dollar homes? Because they’re maintaining the look of the neighborhood and that’s what we want to maintain over here as well.  So people are welcome here but they gotta play by the same rules. If they’re not playing by the same rules, they’re really not welcome in this community.”

A hyper-speculative real estate market has elevated and sustains the multi-million dollar value of South Brooklyn’s housing stock largely comprised of one- and two-family properties. However, these same market conditions are also the driving force for predatory equity and the practice of illegal conversions.

Sunset Park’s 818 55th Street is a particularly egregious example of greed and exploitation. Tracing the ownership of this property provides a genealogy of Sunset Park’s demography as the modest, two-family rowhouse passed from an Irish owner to a Norwegian owner, in 1973, and then, a series of Chinese owners beginning in 1987. Most significantly, when the property was sold in March 2015 to 818 Inc., it ceased to be a family home and became an investment vehicle.

Given Sunset Park’s speculative real estate market, within six months of 818 Inc.’s $1.45 million purchase, the investor group flipped the property for a mere $100,000 profit in the sale to Access 818 LLC in September 2015. A short month later, the first of several complaints that the two-family building was illegally subdivided into a SRO hotel with 25 rooms was registered with DOB. Although a full vacate order was issued in May, the Chinese press reported that at least 13 tenants were still living at the property, each paying a monthly rent of $400 for a closet-sized room, when the Mayor’s Office of Special Enforcement took action July 14. Access 818 LLC has since been issued six Class 1 violations indicating immediately hazardous conditions and incurred $69,000 in penalties.

Right around the corner from this illegal SRO hotel is a huge construction site for the future Winley Plaza Condominium, a modern, glassy six-story commercial condominium building with ground level retail. Financed, in part, with a Cathay Bank mortgage and EB-5 investments, the developers seek an unprecedented total sellout of $76.3 million which, according to The Real Deal, “would be the most expensive condo offering of any kind to date” in Sunset Park.

Developer confidence in the lucrative profitability of the neighborhood’s commercial real estate is evidenced further south on 8th Avenue near the Dyker Heights border, where a “ginormous” mixed use development is proposed. Purchased for $51.5 million in 2014, the developer and investment partners plan to build an office tower, two luxury residential towers and a hotel anchored by a Chelsea Market-style retail base. Nearby, a third place-making project called the Brooklyn Friendship Archway, an ornate traditional Chinese pagoda gateway, is expected to receive Public Design Commission approval later this month.

Some community leaders have deemed Council Member Gentile’s bill a form of “tough love” – unpopular but necessary. They also call for more residential development to alleviate the outstanding need for affordable housing. Given the current market climate, more development will not only fail to address the housing gap but will further exacerbate the affordability crisis faced by the working poor. As long as real estate properties are viewed as investment vehicles with tremendous untapped value, predatory activities such as illegal conversions will continue to shape the residential landscape of the city’s neighborhoods.