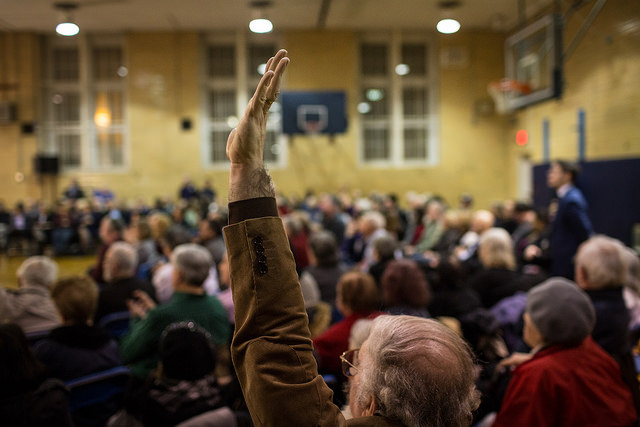 Inwood opponents of a luxury tower widely touted as bringing affordable housing to the community are exhibit A in “Bill de Blasio Versus NIMBYism,” a Gotham Gazette article published October 7.

But as one of several grassroots organizations who fought this project, we at Inwood Preservation are disappointed in the undeservedly negative and inaccurate picture of sincere citizen involvement the story painted, characterizing us as forces of inertia and citing newspaper editorial boards that repeat the mayor's spin on the "deal" that was reached on the 4650 Broadway project.

The thousands of residents who petitioned and won City Council Member Ydanis Rodriguez’s vote against the spot upzoning welcome more housing at rents they can afford, and in buildings that fit the overall character of the area. The luxury tower offered neither.

The biggest myth of the Sherman Plaza project was that the developers agreed to reserve 50 percent of their units as affordable housing in exchange for upzoning that would have allowed up to three times the floors of neighboring buildings and a doubling of the number of luxury units. But as residents found out with the Rheingold development in Bushwick, such promises go out the window if the property is sold. Once the property is upzoned, though, the higher height, and the luxury units, remain.

Regardless of the promises, many Inwood residents would be priced out of the affordability ranges allowed under de Blasio’s Mandatory Inclusionary Housing (MIH) plan, and would not be guaranteed access to rent the new “affordable” units, which would be filled through a citywide lottery. The mayor’s plan calls for MIH developers to set aside 20 percent of their units as “permanently affordable” for families of three making about $32,600, which is roughly the median income for Inwood. However, if the zoning had been approved, the developer could exploit the program and switch to a more expensive option—30 percent of units reserved for families making about $65,200. Doing so would effectively price out the majority of Inwood residents. (This is not to mention the additional units bringing it up to the vaunted “50 percent affordable”—the developer offered testimony that the figure included 20 percent of units for families making approximately $90,000 to $110,000.)

The ripple effects of this proposed development, already being felt in some big anticipatory property sales nearby, would have been disastrous, leading to widespread tenant displacement. Inwood owes its existence as a working class enclave to its relatively large stock of rent-stabilized housing. This housing has been disappearing for many years. As one of our members testified to the City Council in July, his 145-unit building, just three blocks from the proposed tower, had lost over 80 percent of its stabilized units between 2007 and 2014. Three other buildings within five blocks of the site also had deregulated more than 50 percent of their units in the same period. That’s a loss of hundreds of stabilized units in an area of only a few blocks in a seven-year period.

Local activists have been working in conjunction with our Community Board to look for particular patterns of abuse, as landlords employ various legal and illegal forms of harassment to force out long-term tenants, convert to higher market rates and decimate the stock of affordable housing in the neighborhood. A massive tower with luxury apartments renting at sky-high rates just down the street would only increase the pressure to deregulate. And of course once one spot upzoning occurs, more developers would come in with similar proposals, leading to more destabilization for existing residents. Just where are these displaced tenants supposed to go? Not into luxury towers.

The problems with the mayor’s MIH plan are citywide and many communities join us in calling for revision to protect existing low-income tenants and housing stock. But other issues often dismissed as NIMBYism are simply part of good—and actually already called-for—planning. The Sherman Plaza developers, for instance, did not produce a proper Environmental Impact Statement and misrepresented or left off important facts in their environmental assessment.

A few examples: The first is obvious to anyone who tries to travel up Broadway, past the proposed site by Ft. Tryon Park and along the area’s one through street up to Marble Hill and the Bronx. Besides being already clogged with normal traffic trying to cross the bridge, there are multitudes of trucks and buses going to a large MTA bus depot and Sanitation Department 4-district depot at the island’s northern edge. Inwood’s underground infrastructure for water, sewers, and more is, on average, more than 100 years old and strained. Studies have shown toxic substances in the soils under the property. The sheer size and height of the building would have blocked views of the landmarked park and the Cloisters and cast shadows on it. The historic Packard car showroom building facade and interior, designed by Albert Kahn, would have been destroyed.

We wonder why Mayor de Blasio doesn’t hear what his constituents all over the city are telling him, in unison: that, yes, we need more affordable housing, but the first priority is to do a serious job of retaining all existing affordable units, and any new development should be environmentally sustainable and designed to fit in within the context of the existing community.

***
Maggie Clarke is a co-founder and Suzy Parker is a member of Inwood Preservation, which organizes and shares key information through Facebook. On Twitter @InwoodPres.