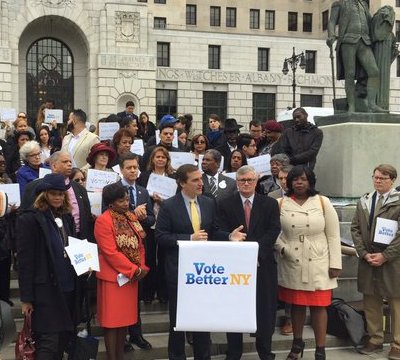 When I went to cast my vote, in the same polling location I have voted all my life, the line was out the door. I’ve never seen it that crowded before. At other polling sites in my district, wait times lasted up to two hours, often scuttling voters' other plans for the day or causing upheaval for families. Observing the chaos, I thought about the 34 states that have already enacted early voting, a process proven to increase voter participation and enhance convenience.

The American voting system is known to erect hurdles to participation and discourage voters in too many cases. Aside from the lack of early voting, we have other problems: in New York alone, more than two million eligible citizens are not registered to vote. This is why I introduced the Voter Empowerment Act, which would implement automatic voter registration among other needed reforms.

It is several sensible and essential pieces that we should pass immediately.

This year’s elections reminded us of the scale of the problem we’re facing. Year after year, New Yorkers become increasingly frustrated with the flaws entrenched in our voting system while too many of our representatives sit idly by. In the last year, Oregon, California, and Vermont became among the first states to approve automatic voter registration, and both President Obama and Governor Cuomo have voiced their support.

In the annual U.S. Election Assistance Commission analysis, New York State is ranked 46th in voter turnout, an embarrassing distinction routinely. We will continue to rank among the worst in the nation if we don’t act.

This rambunctious election captured the attention of millions. It's showroom feel attracted voters to the polls, increasing turnout in New York City from 2.46 million in 2012 to 2.52 million this year.

Unfortunately this was the exception, not the rule, and it’s also not a big enough jump. Too often, average Americans' voices are ignored. Electoral reform is a critical step that would help restore faith in our democracy and give our citizens a bigger stake in their government. By continuing the current outdated system, government has failed to do its part to provide voters with effective methods of convenient registration and voting.

Isolating voters does our democracy no good. The more we expand access to voting, the less we suppress voter participation through our inaction.

On November 8, more than two million New Yorkers were unable to vote for our next President despite being eligible to do so. It is time to eliminate barriers to participation in our democracy and ensure the fundamental right to vote is equally provided to all New Yorkers. I continue to urge every citizen currently registered to continue to get out and vote. We've got to make voting easier, not harder, because your voice matters.