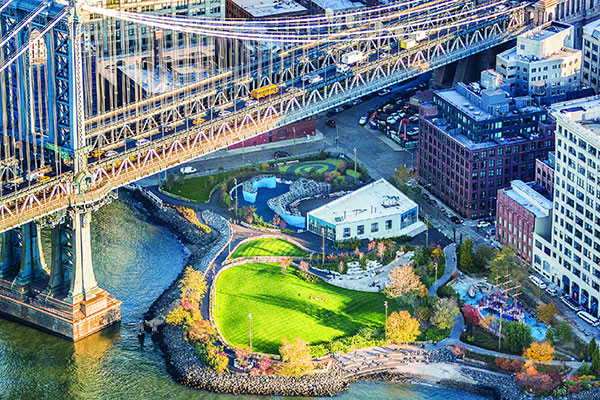 Recently, there has been considerable focus on the idea that public parks are important to the health and wellbeing of New Yorkers. Mayor Michael Bloomberg invested $5 billion in parks during his 12 years in office after decades in which even caring for existing parks was a low city priority. Mayor Bill de Blasio has made his Community Parks Initiative a centerpiece of his agenda to reduce inequality in all aspects of city life. Since announced, the number of community parks targeted has increased from 35 to 67, at a total cost of $285 million in capital. In August, the Mayor announced an additional $150 million to upgrade five New York City parks – one in each borough.

With more than 1,000 parks in New York City, these investments are welcome, but only a drop in the bucket. And capital is in many ways a smaller issue than maintenance, which is provided for in the city’s expense budget, and which competes for scarce tax revenue. Sadly, the budget for maintaining parks has never recovered from the fiscal crisis of the 1970s and is woefully inadequate to the task.

If public funds are short, is private money the answer? A number of privately-funded park conservancies have grown, starting with the Central Park Conservancy, to fill the gap for missing public funds. But that only works when there are well-to-do people in close proximity to a park who care enough about its upkeep to contribute their own money.

Another approach, exemplified by Hudson River Park and Brooklyn Bridge Park, are large parks built with public money but required to be financially self-sustaining. In other words, parks that must generate revenue within the park to cover ongoing operations and maintenance. These are thought of as a way to leverage public money to produce private investment: so-called public-private partnerships. They have a mixed record.

Hudson River Park was created first but it has struggled for years despite the fact that visitors flocked to the site even when the park was only a strip of concrete on which to run, bike, and walk next to the Hudson River. The park has not received as much capital as it needs, but also does not have enough revenue to cover its expenses. Yet its efforts to remedy that situation by bringing in new private sources have been fought by the neighboring communities, local elected officials, and civic groups. After many battles, the Hudson River Park Trust has obtained legislation permitting it to sell its air rights to developers who wish to build across the street from the park, but many are still unhappy with this result.

The latest installment in the Trust’s attempts to build the park is the lawsuit being waged to prevent the development of Pier 55 as a landscaped venue for non-profit cultural and musical event. This, despite, or perhaps because, wealthy donors have agreed to provide the bulk of the funds and ongoing maintenance.

In the case of Brooklyn Bridge Park, generating revenue within the site to cover the cost of operating and maintaining the park was from the beginning a condition of the state and city providing the necessary capital to build the park. That revenue had the added benefit that it would be captured directly by the park and not be subject to the vagaries of the city budget process.

When it turned out that maintaining the pier structures upon which much of the park sits was considerably more expensive than thought, housing along the edge of the park was chosen as the revenue generator because it would provide the most revenue in the smallest footprint. Although that plan was endorsed by all of the major neighborhood and civic organizations, and survived a legal challenge on the grounds that the park would not exist but for the housing plan, there has been a constant and growing effort to prevent the last housing project from going forward, thereby depriving the park of needed revenue.

A different set of local elected officials than were earlier in place now repudiate the bargain that was made, while many in the community either don’t know or don’t care what commitments were made. Litigation over how to proceed is pending while piers deteriorate.

Why are these park arrangements controversial? The public at times seems uncomfortable with the concept of public-private ventures. Some do not trust wealthy people offering funds to provide a public good, regardless of how good it may be. They don’t like developers whose investment is needed to help pay for a park, especially when it means market-rate housing for more wealthy people (though when Mayor de Blasio proposed some affordable housing for Brooklyn Bridge Park, the neighbors didn’t like that, either).

Some people are philosophically opposed to private funding, but, for many, opposition to public-private ventures may be a cover to protect their own private interests – like inexpensive parking on Pier 40 or a private grudge in Hudson River Park, or an impaired view on Pier 6 in Brooklyn Bridge Park (even though disclosed in their prospectus).

Legitimate issues arise when private funds support public purposes, and each project must stand on its own merits. Still, public resources are often inadequate to needs. In the case of major new parks like Hudson River and Brooklyn Bridge, the choice was not between public funding and private funding, but between park and no park. Both are democratic parks, available to all, wildly popular, and reflective of the diversity of New York. When the litigation and controversy end, as they will, two great parks will remain.

***
Joanne Witty, a lawyer and environmentalist who has served in both City and State government, was president of the community-based Local Development Corporation that created Brooklyn Bridge Park's master plan. She currently serves as Vice Chair of the Brooklyn Bridge Park Corporation, the city-sponsored not-for-profit organization that is building and operating the park.