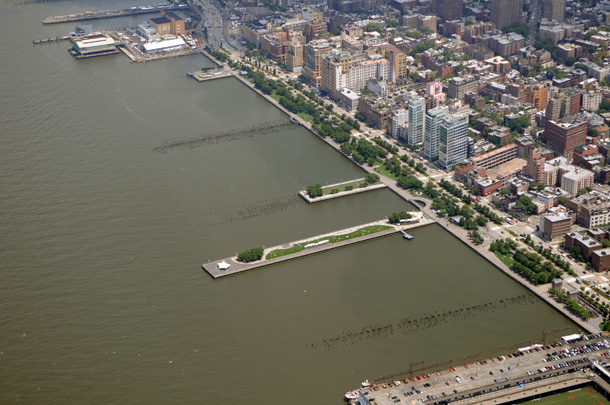 Building sites for so-called "parks" or other misplaced uses in or over the water offshore is a ruinous policy. Unprecedented proposals now before the City Council to help finance such in-water construction by selling legally dubious "air rights" (supposedly unused development rights) from sites in the lower Hudson River--starting with Pier 40--or other public waterways to mega-developers would magnify this harmful policy's potentially catastrophic citywide impacts.

Joanne Witty's Dec. 2 op-ed contained misrepresentations used by both the Hudson River Park Trust (HRPT) and the Brooklyn Bridge Park Corporation to market the in-water parts of these public authorities' projects. In both cases, the green space on dry land under their purview is genuine parkland. But the real estate these authorities plan to keep rebuilding in the water in the guise of a park is not.

The public waterway in the lower Hudson River--the natural resource now under the gravest immediate threat--is not a "park.” The River's priceless nearshore waters are the worst possible place to build or rebuild real estate for any non-water-dependent use. The 490 acres of open waters and piers and other structures under HRPT's jurisdiction are in a #1 (highest risk) hurricane evacuation zone, so building sites to attract more people to the river at that location puts too many people in harm's way in deadly storms. These waters are also an irreplaceable aquatic habitat for living marine resources, including valuable coastal fisheries. And the river's open waters are a treasured public open space resource for many thousands of New Yorkers.

Some good reporting on the risks to human life and property from building real estate offshore followed right after Superstorm Sandy, but since then too many investigative reporters have been asleep at the switch. The staggering risks to public safety from Hudson River development are matched only by the risks to city finances and to sensible public spending priorities, since under disastrous 2013 state legislation city and state taxpayers would be on the hook for storm and hurricane damage costs and liability claims and disaster recovery costs -- potentially billions of dollars worth, based on Superstorm Sandy.

None of the Council's large staff had made timely, accurate information about these complex proposals public before crucial Council subcommittee and committee actions Dec. 5, despite an outpouring of opposition from Sierra Club, Clean Air Campaign, Friends of the Earth, and other activists. If the full Council approves and signs off on unprecedented, legally dubious "air rights" transfers from public waterways on Dec. 15, high-risk, complex financing schemes are likely to follow.

For what purpose? To implement a budget-busting, legally dubious, environmentally destructive, astronomically expensive 1960s policy that would unleash totally avoidable risks on New Yorkers today—along with swarms of “air rights” poised to land on any neighborhood where politicians want to make a deal to misuse our air, water and land.