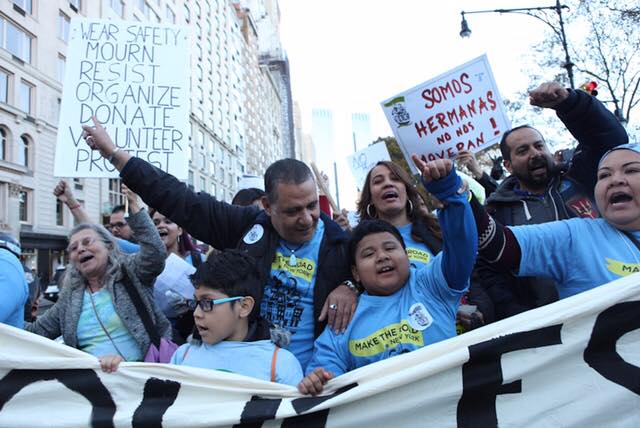 The symbolism of Donald Trump’s nomination of fast-food CEO Andy Puzder for U.S. Secretary of Labor could not be clearer: at a time when fast food workers are leading the fight for fair pay and dignified working conditions in this country, President-elect Trump has decided to declare war on the Fight for $15 movement. And here in New York, workers like me are ready to fight back.

Puzder has fought attempts to raise the minimum wage, argued against expanding eligibility for overtime pay, and supports repealing the Affordable Care Act. At a time when corporations have been working hard to fight minimum wage increases and roll back workers’ rights through forced arbitration of employee grievances, misclassifying workers, and automation, they could find no better ally in harming workers than Puzder.

Like President-elect Trump, Puzder peddles his preferred policies as trickle-down-economics: more money for CEOs equals more jobs for working people. But these ideas have been discredited for decades -- they’re the reason that wages for workers like me have stagnated for so long. And, they’re rooted in the offensive assumption that some people -- service workers, immigrants, and people of color -- deserve to live in poverty no matter how hard they work, while corporate CEOs deserve to get rich off their labor.

A Puzder appointment is bad news for all working people, but the situation is even more precarious for immigrant workers, who already experience on-the-job exploitation like wage theft at triple the rate of the rest of the workforce. A CEO-led Department of Labor, coupled with the nativist agenda of Donald Trump, sends a clear message to employers to ramp up a strategy they have long-used to try to subjugate immigrant workers: weaponizing immigration status to retaliate and intimidate.

Immigrant workers in New York have been leading the labor movement for decades, most recently winning historic increases in the state minimum wage, some of the strongest legal protections against wage theft in the country, and collective bargaining rights in industries, like carwashes, considered “unorganizable.” We remain ready ready to fight, but we will need energetic allies in our city and state governments and creative new strategies to ensure that we protect against the worst of what comes out of Washington, D.C. and continue to win victories closer to home.

First on the agenda will be making sure that the state’s $15 minimum wage victory becomes a reality for all New Yorkers, especially those who will be most vulnerable during a Trump presidency. This means shortening the timetable for reaching $15 upstate, raising tipped workers to the full minimum wage, and implementing new strategies for combating wage theft and employee misclassification. Workers, especially low-wage workers, also need fair scheduling rights in order to better plan their lives and support their families; legislation has been introduced at the City level and should be explored throughout the state.

There’s an old labor movement saying that sometimes management is the best organizer, meaning a bad boss can be the best incentive to organize. While working people in New York, and throughout the country, certainly have our work cut out for us under a Trump administration, Andrew Puzder’s offensive agenda could make him our best organizer yet. We will fight, and we will win.

***
Daniel Cortéz is a member of Make the Road New York (MRNY), which, with New York Communities for Change, is hosting a workers’ forum with leading government officials on Wednesday, December 14 at 7pm at New York Law School to discuss how to defend economic security for immigrant workers under the Trump administration.