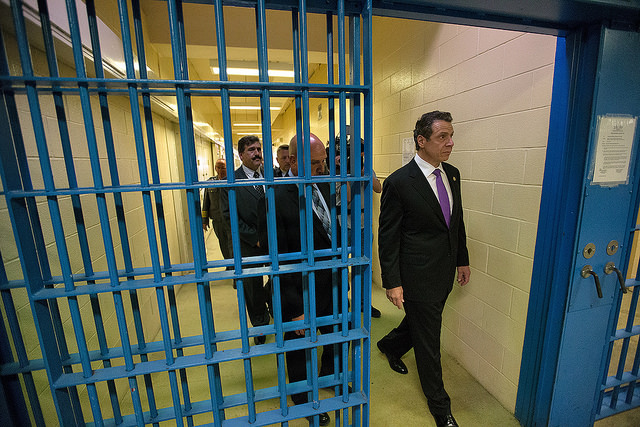 Gov. Cuomo on a prison tour (photo via Governor's Office on flickr)

According to The Sentencing Project, New York State has led the nation by reducing its prison population by 26 percent between 1999 and 2012, while the nationwide state prison population increased by 10 percent. During these years of decarceration, violent crime rates fell at a greater rate in New York than national averages.

This is not enough.

The commission’s independent investigation should go well beyond rooting out structurally racist practices in our prison and parole systems. It should undertake a comprehensive review of the state’s entire criminal justice system, from arrest to reentry, within a definitive timeline.

JustLeadershipUSA believes that those closest to the problem are also closest to the solution, but furthest from the resources and power. To that end, the governor must ensure that the commission includes formerly incarcerated leaders. The commission also should represent the interests of the gamut of other people and groups that interact with the criminal justice system— prosecutors, judges, police and correction officers, people in prison, defense attorneys, advocacy groups, think tanks, victims’ rights organizations, and academics.

After convening, reviewing practices and policies, listening to stakeholders, hearing from experts, and problem-solving for 12 months, this commission should then make recommendations for criminal justice reform to the governor and state Legislature, and disseminate its findings to the public.

In addition to appointing a Blue Ribbon Commission, the governor should use his executive power immediately to address the issues of parole and solitary confinement. With regard to parole, Governor Cuomo should:

And if people are sent to solitary, at the very least conditions and health care should be improved, time spent in solitary should be reduced, and detainees should receive a clear path, based on achievable goals, to earn their way out of solitary.

We will not dismantle hundreds of years of racial bias and discrimination in our criminal justice system in a vacuum. Instead, we must collaborate and engage with impacted people from varying walks of life.

If Governor Cuomo is truly committed to creating systemic change, the creation of a nonpartisan Blue Ribbon Commission is critical to uncovering the disparities in our prisons and our broader criminal justice system and identifying and implementing solutions. Together, we can work toward restoring a historically broken and racially inequitable system.

***
Glenn E. Martin is the founder and president of JustLeadershipUSA (JLUSA), a national organization dedicated to cutting the U.S. correctional population in half by 2030. JLUSA empowers people most affected by incarceration to drive policy reform. Martin is a national leader and criminal justice reform advocate who spent six years in New York prisons. He is the recipient of the 2016 Robert F. Kennedy Human Rights Award. On Twitter @GlennEMartin.