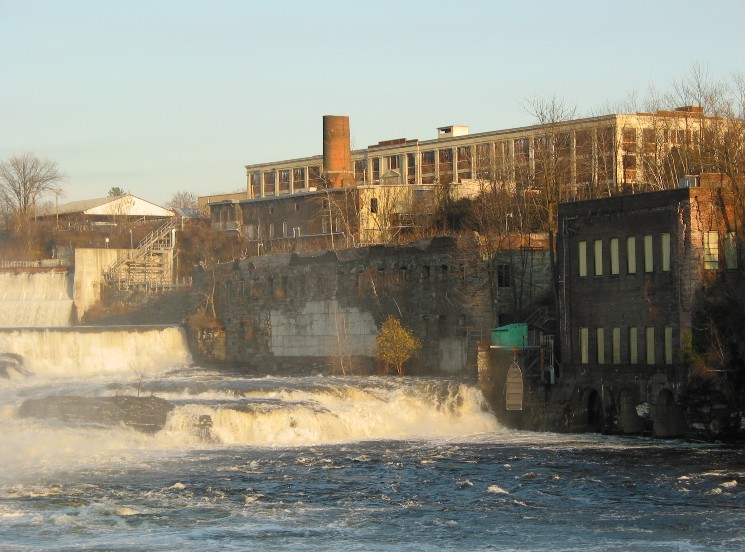 Who is responsible for keeping the Hudson River free from pollution? Actually, it is a responsibility shared by Federal and State authorities. Sometimes they agree; other times, they may be at cross purposes. That can make for some interesting political debate and interplay between the federal and state governments.

Cleaning up PCBs in the Hudson
GE dumped PCBs, toxic chemicals resulting from its manufacturing facilities in Hudson Falls and Fort Edward, into the Hudson for many years. Most of the chemicals settled to the bottom but some drifted downstream. They were ingested by fish, leading to a ban on eating fish caught in the river. After years of controversy and discussion, GE agreed to pay for dredging the river from Fort Edward to Troy, under supervision of the Federal Environmental Protection Agency (EPA) as a federal Superfund project. Dredging work began in 2009 and concluded in 2015 with the removal of some 310,000 pounds of PCBs. GE called it a "major environmental success" and declared it had met its cleanup responsibilities.

EPA monitored the work and expressed satisfaction as it went along. EPA is scheduled to test sediment and fish mostly near the site once more in 2017 and then was expected to certify that GE had met its obligations. When the dredging concluded in 2015, EPA allowed GE to dismantle its PCB processing plant at Fort Edward with the implication that the work was done. The Cuomo administration did not object. Political pundits pointed out that at the time the administration was trying to convince GE to move its headquarters from Connecticut to New York. GE ended up moving to Boston instead.

But the PCB issue is not resolved.

In strongly-worded letters to the EPA in November and December, 2016, New York State Department of Environmental Conservation (DEC) Commissioner Basil Seggos expressed "significant concerns" and asserted that "EPA's work is not done." The river is still "much more contaminated than EPA originally predicted." He added, "it is clear that the dredging performed will not meet...targeted fish PCB concentrations and EPA will not be able to deliver on the projected benefits to public health and the environment from this cleanup unless additional actions are undertaken." Much more sampling and testing are needed, along the entire length of the river from Fort Edward all the way to New York City.

"It's simple," Seggos explained. "DEC is calling on the EPA to finish the job and hold GE accountable for cleaning up the Hudson River. If EPA won't do the job and protect New Yorkers and the environment, DEC is ready to step in and lead."

The war of words escalated in December. EPA Regional Administrator Judith Enck wrote Seggos on December 21 to say, "we strongly disagree" with the "baseless accusation" that EPA has not done its job. She rejected his demand for additional sampling beyond what EPA was already planning, adding that "NYSDEC is free to pursue that sampling itself if it so chooses."

EPA will make its decision early this year on whether GE needs to do more dredging.

Keeping oil off the Hudson
A consortium of maritime and oil companies has proposed construction of 10 "anchorages"  along the shores of the Hudson River, from Kingston to Yonkers, to store large barges carrying crude oil south from Albany. The anchorages would include a total of 40 berths, or parking spaces, for the ships. The proposal resulted from a decision by Congress last year ending a ban on export of oil produced in the lower 48 states.

Proponents say that the action by Congress will increase the amount of oil moving by rail to the Port of Albany and then down the Hudson by boat. Their proposal will produce jobs, help lower energy costs, and boost the economy, they say.

Opponents counter that the anchorages are unnecessary and will cause environmental damage to the river.

The U.S. Coast Guard has legal responsibility for reviewing and deciding on the proposal. It has received more than 10,000 comments from interested citizens, environmental groups, local governments, and others.

A joint letter to the Coast Guard from the New York Secretary of State, Department of Environmental Conservation, Public Service Commission, and Office of Parks, Recreation and Historic Preservation, set forth a long list of concerns about the proposal and called for more study, concluding that the proposal "lacks sufficient justification and detail." The state agencies expressed concern about the number of anchorages, lack of specificity about how many barges would be accommodated or how long they would stay, impact on state parks and other state-owned lands, the risks of accidents and spills, and the impact on fish, particularly two species of endangered sturgeon that inhabit the Hudson. But they couched their reservations not as outright opposition but instead mostly in terms of assertions that there needs to be lots more study and consultation.

Attorney General Eric Schneiderman, who sometimes makes a point of expressing positions on public issues that are independent from those of the Cuomo administration, sent his own letter, not to the Coast Guard but to the head of its parent agency, the Secretary of Homeland Security.

Schneiderman asserted that the Coast Guard should discontinue consideration of the proposal until it is reviewed by the U.S. Army Corps of Engineers, which Schneiderman asserts is required by law. But he went on to express more direct opposition than his colleagues in the other New York State agencies. “No one has demonstrated a manifest need for so many new anchorage sites along the river; no one has demonstrated a need for long-term anchorage at any of those specific locations...." The barges "would create significant security and hazard risks" particularly since the anchorages "would essentially allow barges to serve as oil storage facilities on the river,” he wrote.

The Coast Guard will decide on the barge anchorage proposal early in 2017.

The Hudson River and public policy
The Hudson River's extraordinary historical importance magnifies the importance of these issues. "Far more than a short river flowing through New York State, the Hudson is a thread that runs through the fabric of four centuries of American civilization -- its culture, its community, and its consciousness," wrote Tom Lewis in The Hudson: A History. It is "the valley where nature's creation and human creation meet, the river that connects so much of America's past with its present and future, unchangeable in presence yet always changing."

The PCB and oil barge issues illustrate a number of themes. Public opinion recognizes the commercial importance of the Hudson River. But people seem more concerned these days with the river's historical, aesthetic, scenic, and recreational values. Commercial exploitation has been at least partially upstaged by insistence on preservation for public benefit. There is a consensus that public authorities need to enforce policies to keep the river clean and, to the degree practical, that polluters need to clean up their pollution under government supervision.

But major policy decisions turn primarily on scientific evidence, and some imprecision is inevitable. When has there been "enough" dredging of PCBs? How much harm will giant oil barges cause to protected fish habitats? When federal and state perspectives and standards differ, which should prevail? How should economic and commercial benefits be balanced against environmental concerns?

These questions will be debated as the two issues discussed above play out in 2017. They are judgment calls that, inevitably, whether we admit it or not, are tinged with political considerations. But they are the sorts of issues that will continue to reverberate in environmental discussions here in New York, and indeed across the nation, in coming years.