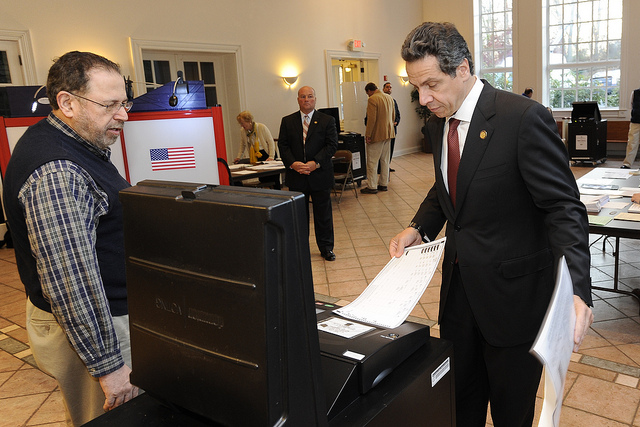 The Trump administration has made a series of unsupported claims about voter fraud that strike at the heart and integrity of our democracy. Beyond potentially undermining voters’ faith in our electoral system, these claims distract from a very real issue: New York’s voter registration system is badly in need of modernization.

Last month, President Trump repeated his unsubstantiated claim (originally tweeted in November) that as many as 5 million votes were illegally cast in the 2016 election and that an investigation would be forthcoming. Later, the White House press secretary suggested the investigation could focus on states where the Trump campaign did not invest significant resources, like California and New York (which Hillary Clinton won by a margin of 1.74 million votes). Then on Feb. 5, the administration announced that Vice President Mike Pence would head an investigative commission into 2016 voter fraud.

Let’s look at the basic evidence about these explosive claims.

First, election administrators from around the country say there is no evidence to support White House claims about the 2016 elections. Here in New York City, the executive director of the Board of Elections recently told the City Council that he was not aware of any voter fraud in the city.

The reality is that in-person voter fraud is virtually nonexistent. Numerous studies of the issue have shown only a handful of instances where fraudulent ballots were cast. One such study of more than 1 billion votes cast found exactly 31 incidents of voter fraud, a rate of less than 0.00001 percent.

Under former President George W. Bush, the attorney general instructed the Department of Justice to investigate voter fraud. After five years, U.S. Attorneys did not uncover any organized voter fraud effort and brought only about 100 successful prosecutions, many stemming from individuals who “mistakenly filled out registration forms or misunderstood eligibility rules.” Even states that have attempted noncitizen voter purges or aggressively pursued criminal investigations have been unsuccessful at uncovering anything more than isolated instances of unlawful voting. (It is worth noting that Senate Majority Leader Mitch McConnell has indicated he will not support funding an investigative commission because he has not seen sufficient evidence that fraud occurred.)

Despite this absence of evidence, lawmakers in some states have used voter fraud claims as a pretext to restrict voting access.

Another key element of the administration’s claims is the phenomenon of “double registration,” which occurs when a voter is registered in two (or more) states. Though it is illegal to cast multiple ballots, being registered to vote in two states is not illegal. In fact, double registration is fairly common: a 2008 Pew study found that one in eight voter registrations are inaccurate or invalid. This is because people often move or buy property in different states, such as when college students register in the state where their school is located.

The 1993 National Voter Registration Act requires states to maintain current and accurate lists and includes important safeguards to protect voters from erroneous removal. To maintain up-to-date lists, election administrators compare the voter rolls to other government data maintained by the Social Security Administration and the Post Office. More recently, states have begun comparing their rolls against lists in other states through exchanges like the Electronic Registration Information Center (ERIC), a practice endorsed by the Presidential Commission on Election Administration.

Some states are making strides to update their technology to get more eligible citizens onto the voter rolls and to keep the rolls accurate, but New York’s system is woefully out-of-date. Our paper-based system leads to typos, names missing from the poll books, and other errors which prevent eligible voters from casting a ballot that counts. Even worse, hundreds of thousands of voters have been illegally purged from the rolls, stripping those New Yorkers of their voting rights.

This is a moment for New York to take leadership on voting rights and use technology to increase access to the ballot. Common-sense reforms like the Voter Empowerment Act, or the New York Votes Act that was introduced by Attorney General Eric Schneiderman last week, would ensure that every voter can easily register and participate in our elections. Modernizing our voter registration system is the best way to ensure the integrity of our elections – not another search for voter fraud that experts and experience tell us does not exist.