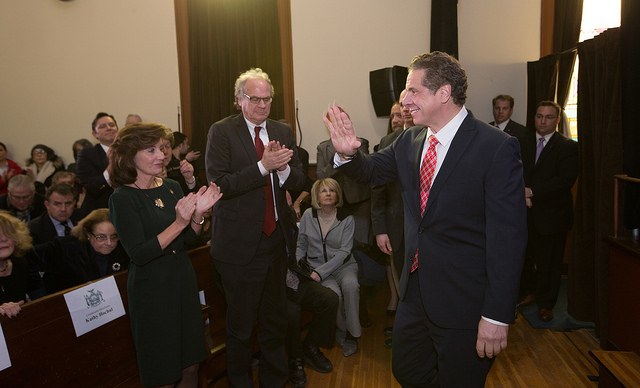 Governor Andrew Cuomo’s unconventional whirlwind State of The State tour has, once again, gotten political pundits pondering the depths of his national ambition, three years out from the next Presidential election.

Much like his father Mario’s legendary Danish Prince act in 1988, as well as his encore performance of 1992, Cuomo the Younger has openly flirted with a White House bid of his own in the past, and with the Democratic bench now resembling an intramural volleyball team, you’d think the chances of Cuomo securing his party’s nomination would be looking pretty good.

Assuming his ever-expanding campaign coffers, currently $21.9 million fat, buy him a third term as governor in 2018, Cuomo would then enter 2020 an automatic top-tier presidential candidate. But what’s his constituency?

Cuomo will likely have to compete with charismatic rock star candidates Cory Booker and Elizabeth Warren, maybe even Kamala Harris, in addition to Amy Klobuchar, Chris Murphy, Martin O’Malley, and possibly his own home state’s junior Senator Kirsten Gillibrand, though she says her primary focus is running for re-election next year. Colorado Governor John Hickenlooper might also join the fray, among others.

After accepting $18 million in campaign contributions from the financial, real estate, lobbying, and insurance industries, it is doubtful Cuomo’s candidacy would resonate very deeply amongst the fiercely populist, anti-corporate liberal grassroots millennials and other left wing special interest groups that are a natural fit for Senators Warren and Booker.

Meanwhile, others, like O’Malley and Gillibrand, might find common cause with the more centrist New Democrats of the Clinton era – a group that ought to be a key Cuomo demographic.

But why would Iowa caucus-goers cast their vote for a career politician and successor to a nearly 40-year-old political dynasty rather than a fresh face? What does New Hampshire get with Cuomo that they don’t get with someone like Warren? Will African-Americans in South Carolina pull the lever for a 63-year-old Italian-American from Queens if Cory Booker or Kamala Harris is on the ballot?

Since being sworn in six years ago, Andrew Cuomo has largely toed the yellow middle line of caution, displeasing hardcore Democrats enough to draw two primary challengers in 2014, who went on to garner 40% of the vote. Cuomo’s infamous Working Families Party “hostage video” is a stark reminder that Cuomo has struggled to consolidate or inspire the base of his party. “Progressive” efforts since have smacked of desperation as he apparently eyes 2018 and 2020. Most Democrats in New York still don’t trust Cuomo.

And if he can’t inspire the base then how can he expect to emerge triumphant from a Presidential primary rife with younger, more appealing progressive leaders?

Also, lest we forget, the governor’s second term has so far seen the convictions of both former Assembly Speaker Sheldon Silver and State Senate Majority Leader Dean Skelos on charges of corruption, as well as the arrests of top Cuomo advisor Joe Percoco, former aide Todd Howe, SUNY Polytechnic Institute President Alain Kaloyeros, and seven others amidst a massive bid-rigging and corruption scandal.

Were he to run for President, it seems unlikely Cuomo would be able to escape the ubiquitous scrutiny of his administration’s failed ethics as well as its failure to provide substantive ethics reform to New York government and politics.

Cuomo has made a career out of being a pragmatist. Despite all the buzz from talking heads trying to fill out their round-the-clock coverage, even he would begrudgingly admit that a third term in Albany might very well prove to be the apex of his decades long political career.