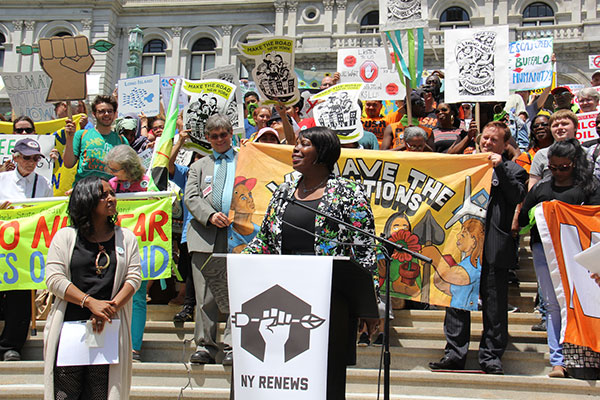 Here are a few things we know:

Trump’s denial of the overwhelming scientific consensus on climate change, and gutting of life-saving policies like strong vehicle emission standards, will push our planet to the brink of catastrophe, jeopardizing vulnerable people while enriching the fossil fuel executives driving his backwards energy policy.

Here’s what we also know:

Governor Cuomo holds the key to leading the nation in climate action with passage of the Climate and Community Protection Act in this year’s State Budget.

This groundbreaking bill sets into law the elimination of climate pollution from all economic sectors in New York, while making sure at least 40-percent of state energy funding is directed to disadvantaged communities, also attaching fair labor standards to a robust renewable jobs agenda.

Like most New Yorkers, I’ve seen the devastating impacts of climate change, especially in the communities I represent in New York City. Superstorm Sandy hit frontline communities first and worst – after the flood, there were outbreaks of mold in public housing that greatly exacerbated the already chronic problems of asthma and bronchitis in communities like East New York and Brownsville.

Another well-documented firsthand impact is the “urban heat island,” which creates dangerous temperatures in the summer, especially for seniors, children, and those with chronic illness.

In other words, even when New Yorkers are not directly harmed by a weather event, the pollution fostering extreme weather, and the aftermath when the storm has passed, compromises our health.

If we don’t get a handle on this problem, it’s going to run away from us, with disastrous consequences.

Tackling climate change isn’t just a safety measure for my community, but every community represented by the Governor and my colleagues in state government. As Chair of the Assembly’s Subcommittee on Renewable Energy, I know that bold action is a down payment on a new future – one built on wind power, solar power, microgrids, energy retrofits, and community-shared renewable energy.

According to data from the Solar Foundation, the solar industry in 2015 added jobs 12-times faster than the rest of the economy.

Last August, wind industry jobs were on track to end the year up more than 20 percent according to the U.S. Wind Industry Annual Market Report.

That means if we make the right policies now, those jobs can be guaranteed to support families and lift up our communities.

There’s a tremendous risk in doing nothing in the face of Trump’s intransigence, or to simply continue the status quo. If New York ups its ambition, we can be the lodestar to the entire country, rising to the climate challenge in a way that lifts thousands of people into the middle class and protects our most vulnerable communities at the same time.

No state in the country is better prepared, and no legislation in the country better accomplishes that goal, than the Climate and Community Protection Act, sponsored by Assemblymember Steven Englebright, championed by the NY Renews coalition, and placed on the budget negotiating table by the Assembly Majority.

Last year it passed the Assembly easily. But Senate leadership refused to allow a vote despite having a clear and bipartisan majority of support. If Senate leadership continues to blindly follow the lead of the only national political party that denies climate science, then it’s up to Governor Cuomo to join the Assembly to make sure that the key provisions of the bill are included in this year’s enacted state budget.

Climate change is not an “environmental issue.” It is fundamentally an issue of both racial and economic justice, two principles we hold dear as New Yorkers. As Trump and his cronies shirk the responsibilities of history, New Yorkers can and must lead.

***
Assemblymember Latrice Walker represents parts of Brooklyn and is Chair of the Assembly Subcommittee on Renewable Energy. On Twitter @AssemblyLWalker.