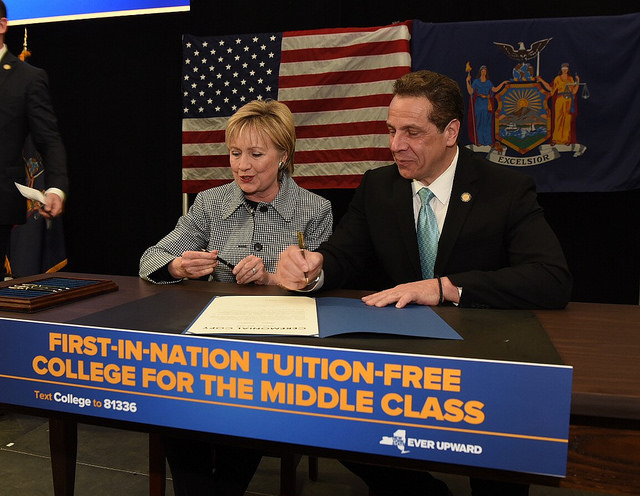 (photo above via The Governor's Office) (image below by Becca Glaser)

With the regularity of a ritual, every year the advocates of high-quality public higher education make a pilgrimage to Albany. Every year, for over 40 years, the request has been the same: stop de-funding higher education. And nearly every year, for over 40 years, the Legislature and Governor do the same thing: cut funding and approve tuition hikes. As a result, annual per-student government expenditures in New York’s public higher education system languish at an average of $8,830; while private colleges nationwide spend an average of $23,100.

More than 60 years after Brown v. Board of Education, a college degree is what a high school diploma used to be. Yet, public and private higher education are increasingly separate and unequal -- and increasingly expensive.

It wasn’t always this way. CUNY was free for New Yorkers from 1847 to 1975, when the institution was majority white. The state imposed tuition through a Wall Street-aligned “Emergency Financial Control Board” in 1976. It was also the first year the university system enrolled a majority students of color.

The steady retreat of government from the provision of higher education as a public good has allowed Wall Street loan sharks to advance. Poor and working-class students have been the casualties, stuck relying on loans or longer and longer hours at low-wage jobs to get themselves through school.

The CUNY administration likes to tout the institution as the “American Dream Machine,” proclaiming in sunny subway ads that “80% graduate debt-free.” They don’t mention a darker truth: over 50% of those who enroll don’t graduate at all, falling prey to a lack of financial aid, the high cost of living in New York City, and the frequent unavailability of classes that are required for graduation (students call this “getting CUNYed”).

Facilities across CUNY are falling apart. And the faculty are increasingly overworked and underpaid -- over half of CUNY’s courses are taught by adjuncts making an average of $3,275 per course. With a full-time teaching load, that would bring you $19,650 per year before taxes, and put you in poverty.

This year in Albany was supposed to be different. On April 7, Governor Andrew Cuomo announced that a deal had been reached regarding the state budget, including approval for his Excelsior Scholarship program, which is now being billed as the first tuition-free college plan passed by a state.

Cuomo is selling us a bill of goods.

He says his “Excelsior” plan makes higher education free for “middle class” families. He does not mention that it actually increases tuition by $1,000 over the next five years (pending approval from the Board of Trustees). Cuomo claims that low-income students currently can cover their tuition with existing state and federal aid, but this is not generally true. Decades of funding cuts, tuition hikes, absurdly low income limits and other restrictions on aid mean that thousands of students already struggle to pay tuition and their costs of living. Now, thanks to Cuomo, they may have hundreds of dollars more in tuition to pay.

The Excelsior Scholarship is a smokescreen for this backdoor tuition hike that will fall on many of the neediest students, who do not qualify for the aid that Cuomo touts. To maintain eligibility for the scholarship, students must take 30 credits per year -- an average of five classes per semester in a standard school year, which is more than the minimum for being full-time. This is an impossibility for students who must work to provide for their families or care for children. With this inordinate course load, students must also maintain a certain GPA, to be decided by their college.

It gets worse. The Excelsior program will also take from the poorest students to fill the coffers of the state. At current rates of enrollment, the $1,000 tuition hike could bring in over $274 million in additional revenue at CUNY alone, given its 274,000 full-time students. It could bring in an additional $400 million from SUNY’s 400,000 undergraduates.

Yet, the state plans to spend only $163 million on the Excelsior Scholarship, leading to a net revenue increase for the government, in part paid for by those students who can’t qualify for the scholarship because they are not able to take five classes at a time. 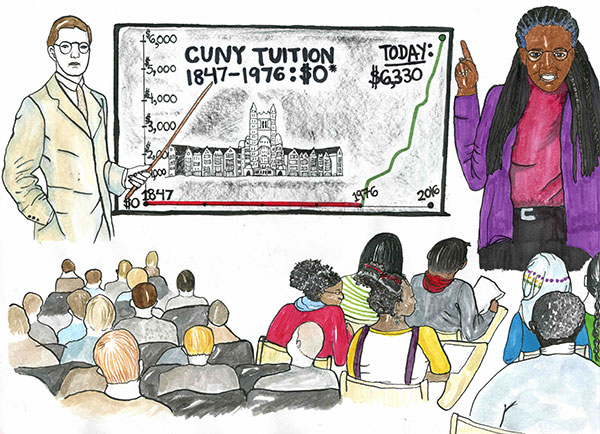 Cuomo’s plan aids middle-income students while turning poor and working class students into a profit center, continuing the 40-year trend of reducing access for the poor to public higher education and shifting the funding burden to students. It also makes no provision for badly-needed investment in the CUNY system: including infrastructure, adjunct pay parity, and support for struggling students.

And there’s one more thing. For those who are able to maintain four years of five classes per semester and meet GPA requirements each semester, Cuomo’s plan will force its recipients to remain in New York for the same number of years that they received the scholarship. If graduates move out of state, they will be charged with debt equivalent to the tuition covered by the Excelsior Scholarship, sending more young people into the jaws of the student loan industry.

We have a better idea.

Higher education is a free public good in dozens of countries across the world, all of which are less wealthy that the United States. It used to be the norm here too. It’s time to bring it back.

The Campaign to Make CUNY Free Again is gathering 30,000 petition signatures to place the “Make CUNY Free Again Law” on the ballot in November’s election. Our proposal will do what Governor Cuomo would not. It will end separate and unequal in New York City’s higher education system by requiring the City to ask the State to authorize a tax on the top 1%. The law will guarantee funding to CUNY on parity with the median per-student expenditure in the private sector, guarantee any New York City resident (U.S. citizen or not) tuition-free access to a college education or the remedial programs necessary to prepare for college, stipends to remove poverty as a barrier to student success, and equity in pay between part-time and full-time faculty and staff, and between the public and private sectors.

For 40 years, the political class has pushed higher education farther out of reach for poor and working-class New Yorkers. If our campaign is successful, on November 7, 2017 we the people will go to the polls to have our say: education is a human right.

Signed:
Erik Forman (@_erikforman) teaches in the public K-12 and higher education system in New York City and is the co-founder of the NYC Social Justice Curriculum Fair.

Tim Hardin is an Inwood-based activist, Army combat veteran, and NYC DSA organizer who attends BMCC and advocates for a free CUNY, single-payer healthcare in NY, and other local and state grassroots campaigns.

Jennifer Hyman graduated from Hunter College with a BA in Political Science and Philosophy and from SUNY Binghamton with an MA in Social, Political, Ethical, and Legal Philosophy in 2011.

Rosa Squillacote is a PhD student at the CUNY Graduate Center; Hunter College adjunct professor and alum; and organizer with the CUNY branch of the Democratic Socialists of America.

Joseph van der Naald is a PhD student in the program in sociology at the CUNY Graduate Center.

Conor Tomás Reed is a CUNY doctoral student, scholar-in-residence at the Schomburg Center for Research in Black Culture, and organizer in the Campaign to Make CUNY Free Again.

Joseph Sellman is a community organizer and regional board member of Citizen Action New York, an active member of Voices of Community Activists and Leaders (VOCAL-NY), and an ‘83 alum of Baruch College.

Tiffany Berruti is a queer undergraduate activists at Hunter College, and is currently involved in NYC DSA.