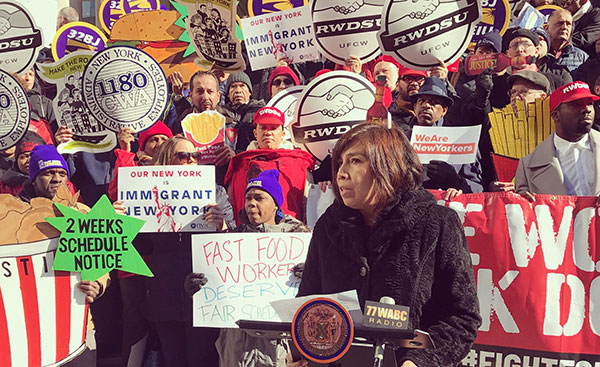 Sitting in front of more than 150 people, Maria Aguilar broke down in tears as she shared how often she experiences discrimination and abuse at the hands of her employers. Maria is a day laborer at “La Parada,” a street corner in Williamsburg where every day she waits and hopes for the chance to be picked up by someone looking for last-minute child care or housekeeping services. Maria is almost always a victim of wage theft and despite working long days and weeks she does not get paid minimum wage, let alone the overtime wages she is owed. After years of toiling under terrible conditions, she joined other day laborers and formed a worker co-op of cleaners with the hopes of regaining some sense of control over who she works for, and on what terms.

She is one of the “lucky” ones. Most workers may never get to set the terms of their employment. Take Pierre, a young father and husband working for a fast food restaurant, who choked up as he told us how he had to wait until Sunday to figure out which two or three days he might be scheduled to work that week, and having to choose between putting food on the table or paying his phone bill. Or Nereyda, a transgender Latina and member of Make the Road New York, who experienced sexual harassment and wage theft at the restaurant where she worked. When she finally obtained a court decision in her favor, her employer went bankrupt and shut down to avoid having to pay her back wages.

New York City stands against these and other exploitative labor practices; we are committed to protecting all New Yorkers regardless of national origin, race, religion/creed, gender, and gender identity.

Mayor de Blasio‘s legislative proposal to address the terrible scheduling practices in the fast food industry by requiring employers to give advance notice to workers of their schedules will make it so that workers like Pierre can plan ahead and know how much money they will bring home. And as our Office of Labor Policy and Standards (OLPS) gets ready to implement the Freelance Isn’t Free Act, gig economy workers will get assistance in recouping money they are owed and navigating the court system. We are building a new generation of workplace protections, and just in time.

A few days ago, the Department of Consumer Affairs’ Office of Labor Policy and Standards (OLPS), along with the city’s Commission on Human Rights and the Mayor’s Office of Immigrant Affairs, held a public hearing on the state of workers’ rights at LaGuardia Community College in Long Island City. We took testimony from nearly 50 workers in the construction, fast food and retail, home health care, restaurant, and taxi industries. I have spent nearly 20 years working in the field of labor compliance at all levels of government, and the stories of rampant wage theft and unsafe workplaces that we heard struck a very familiar chord with me. What I found even more alarming was that the exploitative conditions these workers endure do not discriminate. They have spread across countless industries and span racial and socio-economic divides.

While we wait to see what direction the Trump administration takes in terms of enforcing key workplace protections, we are preparing for the worst. A proposed $2.5 billion budget cut for the United States Department of Labor could result in a gutting of enforcement staff and further deterioration of working conditions. Now more than ever, it will be up to progressive cities and states to step up enforcement efforts and fill the gap left by the federal government.

New York City, led by Mayor de Blasio, is doing just that. We have been enforcing New York’s Paid Sick Leave Law for just over three years, and since January, we have seen a 30 percent increase in the number of complaints filed against employers not following the law. We are encouraged by the fact that people are not shying away from coming to us for help, but this troubling trend coincides with the timing of anti-immigrant policies coming out of D.C.

Today -- Monday, May 1, or May Day -- will be filled with marches and protests, and everyone who cares about workers’ rights, including those at my agency, will be seeking to elevate the issues that plague workers in this country. It has become ever clearer that worker exploitation is an equal opportunity evil that cannot be condemned just once a year. We need to devote more time and resources to filling current labor gaps if we hope to secure a safer and stronger workplace for our children.

***
Lorelei Salas is the Commissioner of the Department of Consumer Affairs, which houses the Office of Labor Policy and Standards. Workers can learn more about what the office does at nyc.gov/dca or by calling 311. On Twitter at @NYCDCA.