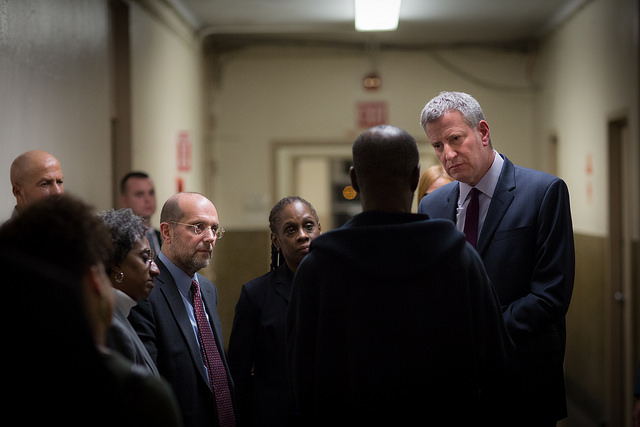 This is part two of a three-part series, De Blasio and Homelessness: A New Progressive Mayor Wrestles with an Old Social Problem, by Peter Nasaw and Thomas J. Main. [Jump to Part One: The Challenge of Homeless Policy]

Part Two: Setbacks and Responses
The new administration was set back when Barrios-Paoli, a seasoned administrator and voice of moderation, left just 20 months after she had joined with much fanfare. Moreover, Gilbert Taylor did not work out as DHS commissioner and stepped down on December 15, 2015. Thus, for about the first two years of his administration, while he was being battered in the press and in public opinion over the issue of homelessness , de Blasio tolerated the presence of an ineffective point person on this crucial issue. With Taylor’s departure, HRA Commissioner Banks took temporary charge of DHS.

Thus, by mid-December 2015, city homelessness policy was perhaps not in crisis but certainly less than optimal.

Responsibility was widespread. Bloomberg failed to follow up on promising beginnings, eliminated housing subsidies, and drove up the shelter census. Candidate de Blasio underestimated how difficult a reversal would be. The conflict between de Blasio and Cuomo delayed the renewal of rent subsidies and kept the shelter census higher than it would have been. The feud also put off a fourth New York/New York agreement, leaving the city with few supportive housing units for unsheltered mentally ill people, who remained on the streets to be seen by all. The mayor responded slowly to the resulting media flap. Putting off building or opening new shelters forced the city to rely on cluster sites and commercial hotels. Turmoil and turnover in city leadership hurt. If de Blasio was to prove that a progressive could govern New York City, he would have to pick up his game, and he tried to do so.

Street Homelessness and Supportive Housing
To deal with the perception that street homelessness was out of control, the administration introduced the Home-Stat program. Sixty workers from the Mayor’s Office of Operations now patrol Manhattan streets and call in sightings of homeless people to the city’s nonemergency phone number, 311. Funding to private outreach nonprofits will be increased so that they can expand their street outreach teams from 175 to 312 workers and thus be able to respond to 311 calls within one hour. The Police Department will redeploy 40 officers to its Homeless Outreach Unit. Two extra mini-counts of homeless people living on the street will be done each year for a total of four yearly counts. The idea is to identify street homeless individuals quickly and bring them to shelter rapidly. It may also be that the administration finally realized that more frequent and more accurate enumerations of street homelessness will be likely to rebut the belief that this population has exploded.

Further, it seems that a way around the Cuomo-de Blasio impasse, as it concerns supportive housing, may have developed. There is still no New York/New York IV agreement, but there is what might be called a New York/New York IV disagreement. In his State of the State speech of January 13, 2016, Governor Cuomo announced plans for the state to develop 20,000 supportive housing units over 15 years. Earlier, de Blasio had announced the city was moving forward without the state and pledged that the city would develop 15,000 supportive units over the same period.

In other words, since the mayor and governor cannot get along well enough to sign a formal agreement, each will undertake part of the job on his own. Supporters of a New York/New York IV had been calling for 30,000 more units and are pleased that in sum the city and state plan to create 35,000 units. The New York/New York agreements were strikingly successful ventures in intergovernmental cooperation, so it is a pity that that process has apparently been abandoned for largely personal reasons. No one knows yet whether the lack of a formal agreement will prove to be a problem.

HRA/DHS Integration
A key part of the effort to get on top of the homelessness issue was the partial re-merger of DHS with HRA. Homeless services were spun off from HRA in 1994. In April of 2016, a 90-day review authored by City Hall with the help of outside management consultants PriceWaterhouseCooper argued that having two different agencies provide services to largely overlapping populations was inefficient. The mayor’s solution was to have both HRA, which runs subsidies, and DHS, which runs the shelters, report to Banks, who was now dubbed commissioner of social services. The review projected $38 million in savings from the combined management structure.

But this partial merger may not be a good idea. As an independent agency, DHS was able to communicate and bargain with other city entities. Most homeless services are performed not directly by DHS, but by contracted providers, who are generally not enthusiastic about the new arrangement. Most providers prefer to deal with a small agency focused on their specific issue rather than a very large but possibly more powerful super-agency. Bureaucratic coordination via consolidation is rarely achieved in America’s fragmented administrative system. Agency effectiveness is more likely to be achieved by smaller, mission-driven organizations. But if the new, better-integrated structure is to work, the mayor needs to get serious about it: so far, no new head of DHS has been appointed.

Housing Subsidies and Their Limitations
Another problem for the de Blasio administration is that the LINC subsidies did not have as much of an effect as was hoped, at least through 2015. According to a report from the Independent Budget Office, as of December 2015, the program was unlikely to meet its targeted goals. Although new data are yet to be made available, there remain concerns about whether enough landlords will accept city-funded housing vouchers.

Analysts believe that since the end of Advantage, housing prices have risen, and so LINC vouchers are too paltry (between about $1,200 and $1,550 depending on household size). Also, many of the very apartments that would be assigned to LINC voucher-holders are still being used as cluster site units.

De Blasio’s other housing voucher program is CITYFEPS. FEPS stands for Family Eviction Prevention Services, and is designed for families that have experienced eviction. The program guarantees four months of rent upfront to incentivize landlords to rent to homeless families. The CITYFEPS vouchers provide the same support as LINC vouchers.

But the FEPS program has serious problems. Apartments that participate in housing subsidy programs—including Section 8, NYCHA, and LINC—are inspected by the city Department of Housing Preservation and Development (HPD) in order to meet federal standards for habitation. However, CITYFEPS units are not inspected by HPD. According to an HRA spokesperson, “For CITYFEPS, not-for-profit service providers generally do an assessment of the units, including a walk-through of the units.” But providers are judged by DHS partly by the number of families they place in independent apartments. Underperforming providers are at risk of losing their contract. So providers have an interest in approving apartments that can undermine their objectivity.

The HPD inspection process is time tested; their inspectors are trained and regulated, and there are rules in place to prevent conflicts of interest. CITYFEPS apartments need to be inspected by HPD in order to protect vulnerable families from being exploited by unscrupulous landlords. Allowing potentially self-interested shelter providers to inspect FEPS units is incautious and likely to provoke criticism when it comes to light.

The city shelter system is regulated by the state welfare department, the Office of Temporary and Disability Assistance (OTDA). In December of 2015, OTDA issued a new regulation that drastically loosened eligibility rules. Very often, families applying for shelter had previously been living in an apartment leased to a family member or friend. Essentially, the new administrative directive made it much easier for the primary tenant of an apartment to refuse to let a family applying for shelter return to the apartment where it had been staying.

Often, prior housing history, public assistance records, and close family ties would show that despite the primary tenant’s refusal, the applicant was in fact lawfully permitted to reside at the address of origin. With the new rules, any applicant who told eligibility specialists that they were not allowed to return to their former apartment would more likely be found eligible for shelter. In effect, the primary tenant now had a greater power to evict family members than did the city marshal.

According to the Coalition for the Homeless, “the 2015 change in policy resulted in a decrease of the percentage of families denied shelter.” No doubt many needy families now received shelter, but the census was also driven up. Whether this was on balance a good deal may be doubted. In any case, almost one year later, in December 2016, a new OTDA regulation allowed the city to re-tighten eligibility standards.

This is part two of a three-part series.
Read Part Three: Can de Blasio Turn the Tide on Homelessness?
Jump to Part One: The Challenge of Homeless Policy