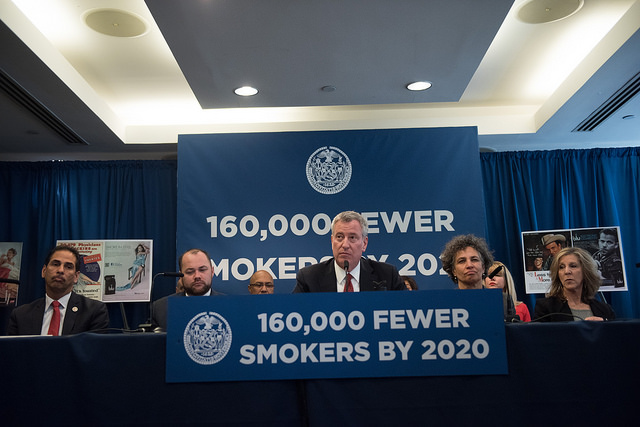 Thanks to aggressive policies and programs over the past decade, the adult smoking rate declined significantly in New York City, from 21.5% in 2002 to 14.0% in 2010. However, to maintain these gains we need to continue to update our tobacco control policies to respond to an ever-changing market where tobacco company strategy attempts to circumvent current regulations.

I have seen firsthand the many challenges smokers face when trying to quit. On top of the addictive properties of tobacco products, New Yorkers who smoke are faced with a retail environment that creates cues to smoke on every corner. The widespread availability of tobacco products in retail outlets, along with extensive marketing at the retail point-of-sale, is designed to attract new tobacco users, discourage quitting and create a normative environment that makes tobacco use acceptable and even makes it desirable. To reduce smoking, we cannot simply focus on the individual smoker: we must also change an environment that encourages young people to initiate tobacco use and blocks efforts by smokers to quit. This package of bills moves New York City closer to that goal.

Individually, each of these bills represents an effective method for addressing gaps in current policies. Implemented together, they represent a powerful, comprehensive and synergistic approach to addressing multiple aspects of the retail environment that undermine tobacco tax policy and create environmental triggers to smoke.

One bill would limit new licenses to sell tobacco products, setting caps for retail outlets to sell tobacco products in community districts. It responds to strong evidence that a high-density retail environment in residential neighborhoods is associated with recent initiation of tobacco use among young adults and greater difficulty quitting among smokers.

Another bill in the package prohibits pharmacies or retail stores that contain pharmacies from selling cigarettes and electronic cigarettes, which will act synergistically with the previous bill to further reduce retail density. In 2014, CVS led the way in ending the sale of cigarettes and tobacco products saying that it was “inconsistent with our purpose – helping people on their path to better health.” Although an important step, other national chains have not adopted this policy, creating the need for government action.

There is precedent and evidence supporting the pharmacy ban. Other cities have already passed similar bills—backed by high levels of public support—and subsequent studies demonstrated the link between these bans and reduced retail density in communities.

Finally, the proposal to establish price floors for cigarette packages, other tobacco products and non-tobacco shisha, and to establish taxes on previously untaxed tobacco products, will reduce the likelihood that smokers switch from cigarettes to cheaper products. This will create a tax and price environment that will reduce youth initiation of tobacco use and encourage people to quit.

Unfortunately, the tobacco epidemic is not static. New products are introduced at an alarming rate, the tobacco industry continues to look for loopholes to circumvent tobacco policies, and sometimes policies have unintended consequences that need to be remedied. To continue to achieve our prevention and cessation goals, we must be proactive and keep pace with this changing environment by introducing new laws to fill gaps in current policies, particularly when the evidence points us in the right direction.

The evidence-based policy package put forth by Mayor de Blasio and City Council members represents a tremendous step forward for New York City’s efforts to meet the National Healthy People 2020 goal of 12% smoking prevalence and, most importantly, will prevent individuals—especially young people—from picking up a habit that is much easier to start than to stop.