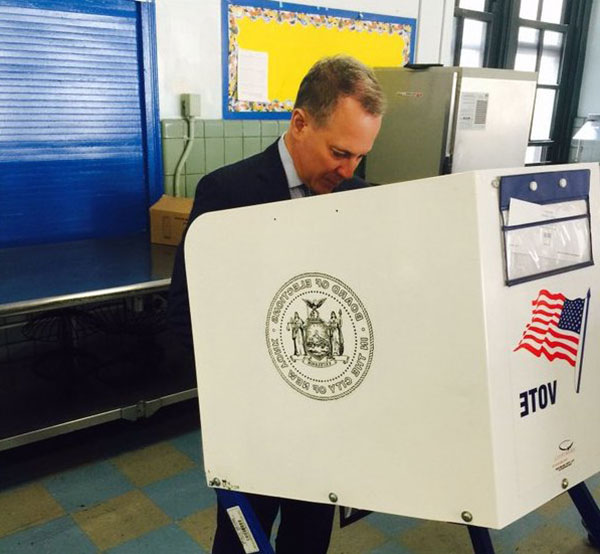 This legislation is a step in the right direction, but I worry that it ignores the most impactful form of voter suppression facing New York: the state’s closed primary system.

About 3.3 million independent and unaffiliated voters are locked out of New York’s closed primaries -- more voters than the Republican Party has enrolled in the entire state!. The system impacts over a million more New Yorkers than automatic voter registration would.

Some argue that independents aren’t technically “disenfranchised” in New York because they still get to vote in the general election. But here’s the thing: New York districts are so uncompetitive -- as a result of partisan gerrymandering -- that over 90 percent of elections are determined in the primary. By the time the general election comes around, most races have already been decided.

Hundreds of thousands of voters were furious when they couldn’t vote in the New York presidential primary last year. Many tried to change their party registration ahead of time, and were still denied a vote, due to this ridiculous rule and the untenable lead time required. New York’s voting laws stifled many new voters or those newly engaged in politics that wanted to participate in our democracy.

I witnessed many of my grassroots organizers and colleagues, people incredibly engaged in the campaign process, not able to vote or forced to vote by affidavit, only to find out later in the mail their vote wasn’t counted. This is exactly what contributes to lower civic and political engagement, and in turn, lower voter turnout.

While Schneiderman originally proposed giving independents the ability to change their party affiliation up to 10 days (in-person) or 25 days (by mail) ahead of a primary, the final version of the New York Votes Act will move the deadline to four months ahead of a primary. If the bill passes, New York would only move from having the longest wait period to change party affiliation to the second longest wait. That’s not reform.

And regardless of the affiliation deadline, the solution fails to address the core reason why so many voters are increasingly becoming independent; they don’t want to join a party for any reason or duration of time. No one should have to register with a party in order to vote in any election. Attorney General Schneiderman even acknowledged that in his report on voting reform, going as far as to recognize that: “Many of these individuals had no interest in affiliating with either of the two major parties” in order to vote. So why make them?

No wonder independent voting rights advocate Francis Barry wrote in a recent op-ed: “New York is the worst state for independents, bar none.” And no wonder New York consistently ranks among the lowest in voter turnout in the country.

When you lock millions of voters out of the primaries, you can’t expect them to turn out for your party in the general election. That much is obvious. Independent voters want to be a part of the political process from day one, not ignored during the primary or told “join a party if you want to vote.”

The abysmal voter turnout in New York is a large part of the reason why Schneiderman introduced the New York Votes Act in the first place. The day the legislation was introduced, he held a press conference at Federal Hall, where he stood in front of a crowd of voting reform activists and declared his support for any legislation that “makes it easier to vote.”

So why does the New York Votes Act tout automatic voter registration as the centerpiece of reform, rather than the single most impactful issue facing New York voters -- the very issue that has the biggest effect on voter turnout?

What good is automatic voter registration for the general election when the vast majority of races are determined in the primary? And why focus on it at the expense of over 3 million voters who want to vote but don’t want to be forced into choosing a party?

Millions of Americans support open primaries. The current system, in which taxpayers fund closed primaries that exclude huge swaths of voters, is unsustainable. You cannot lock out the second biggest voting bloc in a state from participating in what almost always amounts to the only meaningful round of voting. That’s not democracy.

Primaries are public elections funded by taxpayers. Everyone should be allowed to vote in them, regardless of party affiliation.

As a grassroots activist who organized for Bernie Sanders in four different states -- and have since joined NYPAN and the Democratic Socialists of America -- I’ve heard from hundreds of Americans who are fed up with way the country runs its elections.

That’s why I’m supporting the Open Primaries petition to Attorney General Schneiderman and the New York State Legislature to do the right thing, and expand the New York Votes Act to include open primaries.

Abide by your own words, Mr. Attorney General, and make it easier to vote in New York, for all New Yorkers, by opening the primaries.

***
Jeremy Kaplan is an independent filmmaker and political activist.