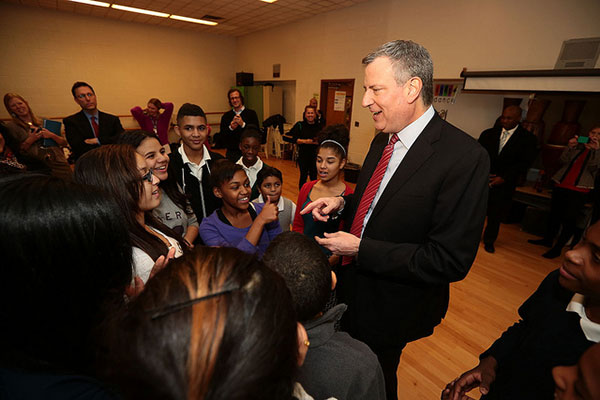 Since Mayor de Blasio’s cries about the dire consequences of the State Legislature not granting him an extension of mayoral control over the city’s public schools didn't seem to work, this perhaps provides us with a little space to have a more open and less hysterical discussion about possible alternatives. What I find striking about the mayoral control debate is the false assumption that there exists a wide consensus on the need for it.

A May 2017 Quinnipiac Poll, consistent with other polls on the subject, found that “Only 21 percent of New York City voters say Mayor Bill de Blasio ‘should retain complete control of the public schools,’ while 68 percent say he should ‘share control of the public schools with other elected leaders.’” However, this has not been acknowledged by the mayor or taken seriously by the media. This probably goes to show the power of the corporate-educational alliance so brilliantly forged by former Mayor Bloomberg in his takeover of the schools back in 2002.

When I listen to Mayor de Blasio decry the corruption and chaos of the old local elected school boards, I see it as an attack on the ability of communities of color to run their own affairs.

The idea that decentralization of a bloated school bureaucracy and local community control of neighborhood schools is presented as a given unfairly cuts off any serious discussion of what really happened with the community control movement and how it was made dysfunctional. It cuts off any serious discussion of the role of parents and communities of color in determining educational policy in a city and school system in which people of color are in the majority.

Because of the lack of serious inclusion of people of color in educational policy, the charter school movement as a form of community control has arisen. Under Bloomberg and de Blasio the role of parents in school governance has basically disappeared. The Panel for Educational Policy is basically a rubber stamp for the Mayor and the Chancellor, and the parent coordinators in the schools are there largely to manage the parents, not increase their participation.

By decrying the corruption and chaos of the past, the mayor is essentially saying that this was inherent in bringing communities of color into the school governance process. If one extended this argument to, say, the state government, then we should be giving gubernatorial control of the entire state government because of the many ethics violations committed by state legislators.

The problems plaguing the decentralized school system before mayoral control were avoidable if there had been will to do so. For example, some thoughtful, careful restrictions on who could participate on local boards could be one remedy. There could also be rules limiting the role of the teachers unions in school board membership and elections that did so much to corrupt the system.

Throughout the state local school boards are elected, while in New York City, in which neighborhoods are the size of small cities in and of themselves, New Yorkers do not have the same right. This right to full and substantive participation in school governance adds to the civic health of the city, and in the past has included the right of non-citizen parents to be part of the process.

How is it that any of these points have not entered the current discourse on the need or not for mayoral control of the city schools? As an increasing majority of the city’s population has become people of color, this type of top-down governance is part of what I call trickle-down progressivism, which must be challenged.

***
Angelo Falcón is President of the National Institute for Latino Policy (NiLP), based in New York City. He is a co-editor of the book 'Latinos in New York: Communities in Transition,' 2nd Edition from the University of Notre Dame Press.