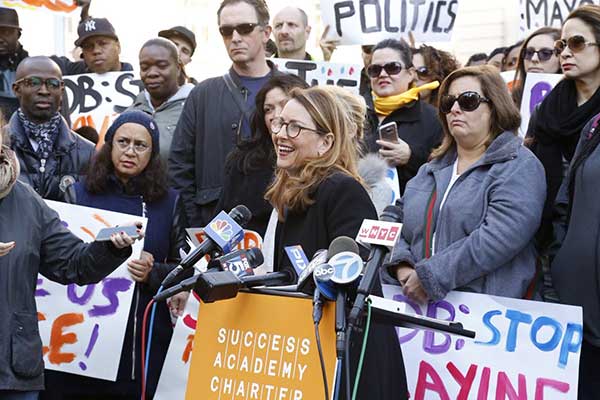 There's a reason why New Yorkers reject Eva Moskowitz's "bipartisan" defense for her photo ops and meetings with the governing Republican Party in Washington, D.C.. While Ms. Moskowitz touts her registration as a Democrat, her actions are inconsistent with the Democratic Party's position on civil rights and political reform. And, as Democrats across the country resist the Trump administration's disconcerting policies damaging to working and middle class families, Ms. Moskowitz participates in friendly meetings with her allies across the aisle.

It takes a lot of privilege for Ms. Moskowitz to somehow believe that the policies that Democrats and the Resistance across the country represent somehow do not apply to her students. Individuals across the country, including some of the families of Success Academy students, are at marches, town halls, and community rallies challenging Republicans' refusal to support transgender children in court, a deadly American Health Care Act, reduced funding for the U.S. Education Department, including cuts to student loan programs that are undoubtedly resources used by the families of children at Ms. Moskowitz's charter schools.

Ms. Moskowitz fails to disclose that the reason families chide her outreach with Republicans across the aisle is because she and other charter school leaders have a record of working behind the scenes with wealthy donors to directly and continually mislead the public. It was only a couple of years ago that billionaire donor Eli Broad, who just awarded Ms. Moskowitz’s network a $250,000 prize, was exposed as the money behind a secret campaign to charterize half of Los Angeles Unified School District's schools. Meanwhile charter leaders, like Ms. Moskowitz's colleagues in Los Angeles, repeatedly publicly denied those accusations. Similarly, a short distance away from New York City, in Newark, N.J., the public's pessimistic relationship with charter school leaders was justified after they had witnessed state officials and charter school operators move forward with plans to expand the presence of charter schools, despite public opposition.

Ms. Moskowitz has a habit of attacking New York City Mayor Bill de Blasio in her demand for more funding and autonomy for her charter schools. However, it seems strange that Ms. Moskowitz repeatedly attacks the mayor, a fellow Democrat, for budgetary reasons yet she doesn't criticize the federal secretary of education, a Republican, who is proposing cuts worth more than $9 billion to national education programs and resources.

While congressional Republicans consider slashing funds to community meal programs and even debate changing how kids get free or reduced lunch, Ms. Moskowitz remains silent. Yet, the charter school CEO has no problem inviting them to her schools for photo ops while bashing Mayor de Blasio, who has challenged charter schools in court for greater transparency and public accountability.

Black organizations like the National Association for the Advancement of Colored People (the N.A.A.C.P.), afters years of internal debate, in October called for a moratorium on charter schools, like the charter network Ms. Moskowitz runs in New York City. In response to the N.A.A.C.P. moratorium and report, Ms. Moskowitz attacked the N.A.A.C.P.’s credibility and authority to speak on education for black children. Despite the fact that Ms. Moskowitz's schools have come under scrutiny for controversial admissions policies and disciplinary practices, which Ms. Moskowitz usually leaves to be resolved by her private consultants and lobbyists.

While Ms. Moskowitz hides behind the cloak of "bipartisanship" to advance her own personal agenda, millions of Democrats across across the country are fighting for our middle class and our children's welfare. And, while Ms. Moskowitz's Success Academy schools serve less than 2% of New York City's 1.1 million students, New York's families would expect her to stand up and speak out for the students she represents. Her students and their families depend on it.

We need bipartisanship in our city halls, state capitals, and in Washington, D.C. now more than ever. Bipartisanship doesn't mean sitting silently and idly as our national leaders fuel bigotry in classrooms, take children’s access to free or reduced school lunch, and strip health care benefits away from kids and their families. It means speaking out and participating in a respectful civil debate that empowers us to resolve the issues. It also means listening when some of our nation’s oldest civil rights organizations call for a public dialogue and a national pause on schools that present a threat to communities’ civil rights.

Ms. Moskowitz can’t hide behind a self-serving and privileged version of bipartisanship.

***
Kenneth Campbell is a public affairs consultant and a former Hope Fellow at the Democratic National Committee. On Twitter @KennCampbell.

Note: this article has been corrected after misidentifying Eli Broad as a Republican. Mr. Broad is a Democrat, according to his office.