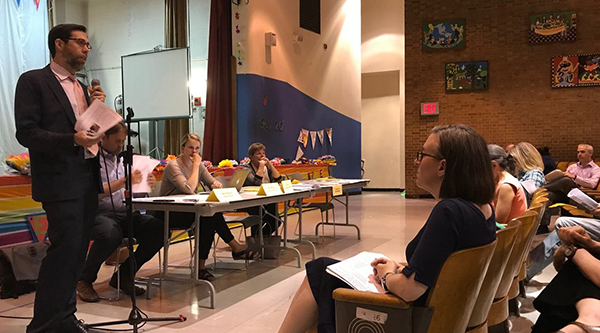 Since Daniel Squadron announced his resignation from the New York State Senate last week, there has been a lot of conversation about “County Committee.” The vacancy in Squadron’s seat will be filled in a special election in November, and state law requires that the Democratic nominee for the seat be selected by the Democratic Party, as opposed to being decided in a primary election.

This means that, in all likelihood, the next State Senator for the 26th District, which includes parts of Brooklyn and Manhattan, will be chosen by a group of fewer than 500 people, since the Democratic nominee is so heavily favored in a general election.

This situation has a lot of people asking, “wait, what is the county committee and why do they get to decide?”

Each Election District in Manhattan (about one city block) elects two to four county committee members. These members are unpaid, political party posts, and have no official government role. They are expected to attend one meeting every two years to elect the County Party Chair and other leadership positions. Beyond this one biennial meeting, county committee members are generally only called upon when there is a vacancy.

In 2011, Assembly Member Jonathan Bing resigned from the State Assembly to take a job within the Cuomo administration. A special election was called and the County Committee members from the 73rd Assembly District were convened to choose the Democratic nominee. Dan Quart was selected, and he went on to win the special election with 63 percent of the vote.

More recently, Bill Perkins' victory in a City Council special election created a vacancy in the State Senate, which was filled by Brian Benjamin, who won the Democratic nomination by virtue of a county committee vote.

Adding to the confusion over county committee is that each county committee seat does not hold equal weight. The value of a county committee seat is determined by a formula based on how well the Democratic candidate for Governor performed in that particular election district. You may want to read that bit of random-seeming trivia one more time -- and think about how that weighted system can then affect the election of new state senators and Assembly members.

If this whole process seems onerous and confusing, that's because it is. There is no question that it benefits insiders and folks who have learned how to work the system. But it is the process we currently have, and the one in which we need to work to ensure that we elect the best candidates (while we also work to change election laws to make them more small-d democratic).

This year, the Four Freedoms Democratic Club, of which I am a member, aggressively recruited local Democrats to run for New York (Manhattan) County Committee. We reached out to community activists, local Indivisible chapters, and longtime Democratic club members. Our pitch was simple: if you’re frustrated with politics, or with the Democratic Party, then the best way to create change is at the grassroots level.

Anyone who is a registered Democrat in Manhattan can run for New York County Committee. To get on the ballot you simply need to collect signatures: five percent of the active registered Democrats in that particular election district, or anywhere from 15 to 50 signatures. This year, in Manhattan alone, there are over 40 contested county committee races, which means voters will have the chance to decide who represents them to the New York County Party.

There are those who believe it’s time to do away county committee votes for party nominees for state level seats, perhaps by shifting to the New York City system, which requires non-partisan special elections to fill vacancies. While that type of system seems preferable in theory, these types of special elections have absurdly low turnout. In that Harlem special election in which Bill Perkins was elected, for example, less than 10 percent of eligible voters cast a ballot. There is currently a bill in the New York State Senate that would implement such a system, sponsored somewhat ironically by now former Senator Squadron. In our current legislative culture, however, the chances of enacting any kind of meaningful election reform are slim to none.

In the meantime, we must continue to contend with the current system, and that means working to ensure that we are electing good people to county committee. I encourage anyone who is interested in this process to get involved in your local Democratic club. You can find more information about the Manhattan County Committee on the Manhattan Democrats’ website.

***
Kim Moscaritolo is a District Leader in the 76th Assembly District on Manhattan’s East Side. On Twitter @kimmosc.