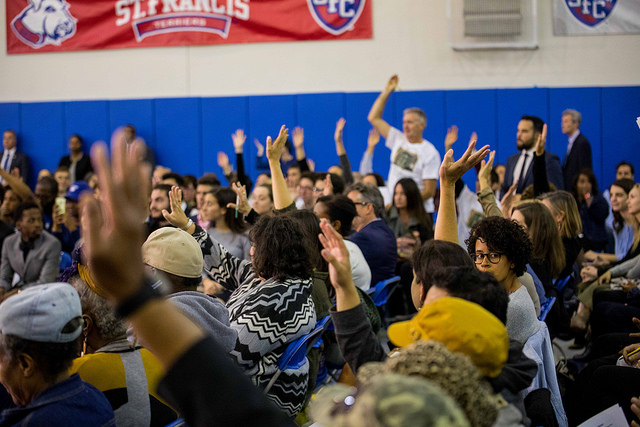 The federal corruption trial of Norman Seabrook, former head of the correction officers’ union, has introduced new evidence of the contaminating role money plays in politics throughout the state. Jona Rechnitz, a wealthy real estate developer with a taste for power, became a star witness in the case after he got caught in the middle of an alleged deal that allowed Seabrook to get a kickback for investing the union’s pension funds in a risky hedge fund. Rechnitz had also been associated with allegations concerning the Port Authority and Westchester County, was found to have given expensive gifts to police brass in New York City in exchange for special treatment, and had donated so much money to Mayor Bill de Blasio’s election campaign in 2013 that he was appointed to the mayor’s inauguration committee.

In the course of testimony, Rechnitz could not seem to restrain himself in bragging about his easy access to City Hall after raising more than $150,000 for the mayor -- access the mayor partially denies. In March, de Blasio had been relieved of criminal charges in two investigations when the Manhattan District Attorney and the U.S. Attorney issued coordinated statements indicating that there was insufficient evidence to prosecute him or his staff.

In a ten-page public letter, however, District Attorney Cyrus Vance declared, “the parties involved cannot be appropriately prosecuted,” but added, “this conclusion is not an endorsement of the conduct at issue.” He elaborated, “the transactions appear contrary to the intent and spirit of the laws that impose candidate contribution limits,” further explaining that the relevant statutes “are meant to prevent corruption and the appearance of corruption in the campaign financing process.”

With all due respect to Mr. Vance, I beg to differ with his conclusion, at least in part.

“Spirit of the law” is a legal concept that commonly refers to higher order values that statutes are designed to fulfill. In this particular case, the laws in question could have been intended to limit contributions, or more generally “prevent corruption or the appearance of corruption,” but practically speaking, they are only half-hearted attempts to do either. When it comes to elections or politics, the real intent of the state law in New York is to create the illusion that legislators intend to limit the role money can play, while they incorporate loopholes to undermine effectiveness. Such a charade is the real “spirit of the law,” and one reason to seize opportunity to change it.

Let me be specific. In New York State, an individual cannot donate more than $10,300 to the campaign of a single candidate. Ostensibly, the objective here is to prevent a donor’s undue influence over an elected official. A person can, however, donate up to a $103,000 to county political committees, which in turn can support a candidate with that money and more.

District Attorney Vance had his own explaining to do last month when it was disclosed around two controversial and high profile cases that he took campaign contributions from lawyers who conduct business with his office. When asked about the practice, Vance’s response was “It’s legal.”

The sad reality is that money is the fuel of American politics. If you want to enter the political arena, the first thing you need to do is fundraise. Unless you are independently wealthy, you need to attract donors. People don’t always contribute to campaigns out of altruism to greater causes or belief in a candidate’s capacity to do good. Donors, especially big donors, expect to be granted influence that may or may not benefit them personally.

Independently wealthy candidates who can afford to spend their own money on an election bring their own problems. Mayor Michael Bloomberg spent such unfathomable amounts of money to get himself elected three times (nearly $110 million in 2009 alone) that it distorted the democratic process. (His main opponent, William Thompson, spent $10 million). Under the law, there is no limit to what a candidate can spend on his own campaign, even in New York City, which has significantly more robust campaign finance laws than at the state level.

In fact, Bloomberg had so much money that he famously gave it away. When he was in office, Bloomberg’s top deputy mayor simultaneously served as the CEO of his private philanthropic foundation, which dispersed millions of dollars to applicants for various projects. The city Conflicts of Interest Board approved the arrangement, making it legal. When Bloomberg petitioned the City Council to overturn a term limits law so he could seek a third term, there were press reports that his aides pressured beneficiaries of his philanthropy to testify on his behalf.

Governor Andrew Cuomo and the New York State Legislature have ignored appeals to enact meaningful election reforms to reduce the influence that money has in politics. In 2014, Cuomo abruptly and controversially dismissed his own Moreland Commission investigating corruption in the state. The Legislature in Albany is reputed to be one of the most corrupt and dysfunctional in the country. Over the past ten years, more than two dozen of its members have been convicted or sanctioned for wrongdoing, including the top leaders of both houses, who have been sentenced to jail (their convictions were each recently overturned based on new Supreme Court precedence, but they will be retried in 2018).

The legislative process is invested in the status quo and rigged against reform.

New Yorkers have a legal way to circumvent the legislative process by holding a constitutional convention if they vote to do so on Election Day. It is question one on the back of the ballot, where a “yes” vote would trigger the convention process.

A convention would open discussion on a range of controversial issues, and it cannot fix all that is wrong with a money-driven political process that has been further compromised by the federal judiciary. Yet, given the hidebound thinking that immobilizes Albany, a convention is the only way to get the reform ball rolling on matters that go to the heart of the democratic process and its fundamental integrity.

***
Joseph P. Viteritti is the Thomas Hunter Professor of Public Policy at Hunter College and author of The Pragmatist: Bill de Blasio’s Quest to Save the Soul of New York.