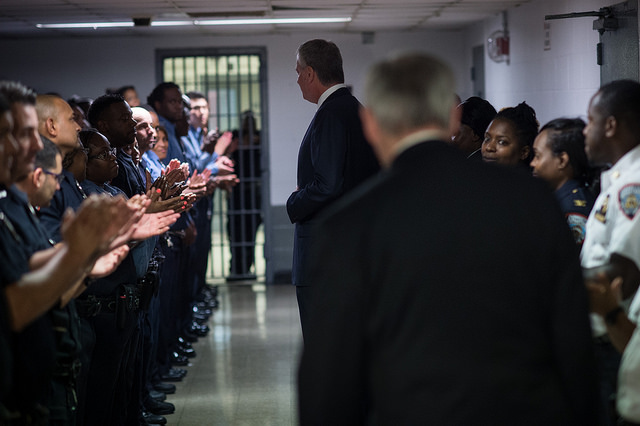 Due to the work many have done to illuminate the dehumanization and torture rampant on Rikers Island, city officials are finally proposing tangible steps to shut it down. This Monday, December 4, the New York City Council will hear testimony on progress being made toward closing the Rikers Island jails. Much of the discussion around closing Rikers jails, sure to continue Monday, centers on reducing the overall jail population in the city, but also on replacing available jail space.

As politicians and city agencies share plans to shut down the island’s ten-jail complex, it is imperative that the people of New York recognize the impact of these proposals: the modernization and adaptation of New York City’s jails will ultimately expand the scope of surveillance and imprisonment in the city and state.

The challenge going forward is to resist the prevailing attitude that the horror of jail is unique to Rikers Island and not inherent to the institution of jail itself, and to prevent the expansion of the jail system under the guise of reforms, improvements, and repairs. Critical Resistance NYC and the imprisoned organizers with whom we work recognize that jail systems cannot be converted into something humane and that the solution to the violence of Rikers cannot be a new kind of imprisonment.

Mayor Bill de Blasio’s plan calls for a ten-year process of depopulation, renovation, and new construction that will eventually result in the closure of Rikers, but we call out these strategies, outlined in his Smaller, Safer, Fairer “roadmap” for closing Rikers, as simply an extension to the life of the system. Closing Rikers only to replace it with new “state-of-the-art” jails and an expanded network of technologically-driven monitoring does nothing to alleviate the material consequences of detention and imprisonment or to curtail the reach of the prison industrial complex in New York. Instead, the city must implement tangible policies that bring us closer to ending the use of pre-trial detention altogether.

With millions of dollars allocated for repairs and technological upgrades to existing facilities on Rikers, the Department of Correction’s budget does not reflect the claim that we are on a path to divesting from the very system that produced the horrific conditions that now warrant the closure of Rikers. Repairs to facilities marked as problematic and slated for demolition squander funds that could otherwise be spent on life-sustaining services that address social and economic needs and on community-led initiatives for addressing harm and accountability in non-punitive ways.

The Mayor’s plan to shrink the jail population without more significantly shrinking the number of people who are policed, criminalized, and arrested in the first place is not an effective path to decarceration. Reductions that aim to stop the flow of people into the city’s jail system could start immediately – in particular, by putting an end to broken windows and community policing, which only increase police presence in our neighborhoods and broaden their jurisdiction over virtually every aspect of our lives, especially in communities of color. New York City must refuse imprisonment and mandated monitoring as sustainable solutions. Instead, we must build a city-wide system that guarantees transformative, voluntary social services as well as resources that support people released from jail in order to facilitate the immediate jail depopulation that will actually move us closer to closing Rikers while making any new jails obsolete.

The city’s decision-makers must abandon any process to close Rikers that feeds, expands, and further calcifies the city’s jail system. We cannot truly overcome the violent reality of Rikers if our solution to its abuses depends on deepening wasteful spending in other jails and new forms of surveillance and monitoring in our communities. We must work to shift priorities from imprisonment and control to supporting and amplifying true community-led solutions to conflict, harm, and violence that strengthen community stability and meet people’s needs.

***
Kate Hudson and Marlene Nava Ramos are members of the New York City chapter of Critical Resistance, a national, member-led organization that seeks to create genuinely healthy and stable communities that respond to harm without relying on imprisonment, policing, and punishment.