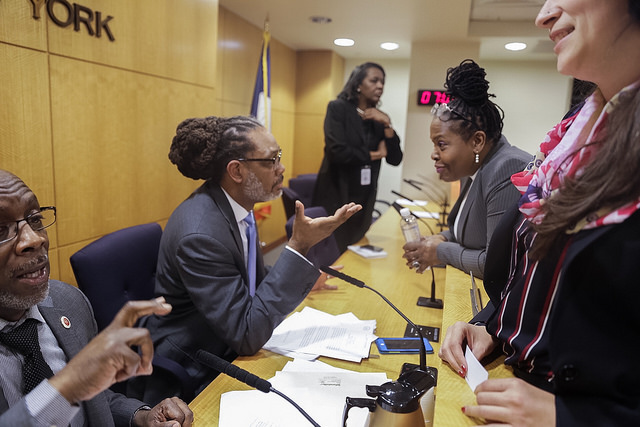 Just when I thought I’d seen it all, here comes Michael McKee with a screed against middle class home sharers like me that would -- or at least should -- make the hotel industry blush.  From one New Yorker to another - thanks but no thanks. We don’t need a white “savior” to tell people of color that they know how to best address gentrification in their communities.

I am a third generation Bedford-Stuyvesant resident, mother of three, and a proud constituent of City Council Member Robert Cornegy, Jr. For years, I’ve shared my home with travelers from all over the world -- introducing people to my favorite local businesses and generating some extra income to provide for my family.

Hosting through Airbnb helps me pay my property taxes, contribute to my children’s education, and stay in the home and neighborhood I love, so that one day I can pass it on to my children.

In his op-ed, McKee uses desperate attacks filled with debunked reports and misleading data to explain his misinformed view of why home sharing “doesn’t work.” He asserts that "75 percent of Airbnb revenue in New York City is generated by commercial hosts with multiple listings, not ‘regular folks’ renting their own place.” This is false.

In reality, 95 percent of New York City hosts who share an entire space have a single listing and 88 percent of host ​earnings ​in ​the city ​come from ​guest ​stays ​in ​private ​and ​shared ​spaces (i.e. a spare bedroom), ​long-term ​stays ​lasting ​at ​least ​30 ​days, ​and short-term ​stays ​with ​hosts ​who ​have ​only ​one ​entire ​home ​listing.

This data can easily be found in Airbnb’s monthly data releases, but it’s pretty clear that McKee has no use for facts.

Indeed, he claims, without evidence, that "North and Central Brooklyn are the epicenter of gentrification in New York City, and Airbnb has played a destructive role.” Nothing could be further from the truth. In fact, Airbnb is helping families like mine stay in our communities. Home sharing is a bulwark against gentrification and the rising cost of living. Seventy-nine percent of Airbnb hosts in New York City report that home sharing has helped them stay in their homes, with 30 percent saying it’s helped them avoid eviction or foreclosure.

Moreover, rents in many Brooklyn neighborhoods were rising far before Airbnb came to town. According to MNS monthly reports, the average 1-bedroom in Williamsburg in January 2011 -- when Airbnb was still in its infancy -- cost $2,979 a month. In October 2017, the figure was $2,946, a decrease over the period of Airbnb's greatest growth.

The sad truth for a proud organization like Tenants PAC is that its leader, Mr. McKee, sounds more like a mouthpiece for the big hotel industry than he does an ally of tenants and homeowners.

It’s outrageous for McKee, who lives in a pre-war condo in Chelsea, where two-bedroom units sell for over $1 million and one-bedrooms rent for more than $4,000, to point his finger at New Yorkers like me as the cause of gentrification in our own neighborhoods. It's even more ridiculous when he cites an offensive, completely flawed "study" by an opponent of home sharing that was torn apart by actual academics.

Instead of parroting specious arguments made by the hotel industry, which continues to bulldoze permanent housing to build luxury hotels in New York City, even as profits stand at all-time highs, true advocates for tenants should get behind a bill introduced by Brooklyn Assemblymember Joe Lentol, A-7520, which would ensure that New Yorkers could share their own home, while protecting affordable housing from bad actors who threaten to remove permanent tenants.

The bill creates a mandatory registration system for hosts and would allow Airbnb to collect nearly $100 million in lodging/sales taxes in the first year alone. That’s money that could be used for affordable housing, as in Portland, Oregon and New Orleans, or services for people without homes, as in Chicago and Los Angeles.

You don’t have to look at Census data to realize that there are more white folks and fewer black folks here than there were 10 years ago. Bed-Stuy isn’t static -- no neighborhood ever is. But families like mine that have invested blood, sweat, and tears into this community for generations are going to do whatever we can -- including hosting through Airbnb -- to keep a toehold in the place we call home. Maybe Michael McKee should swing by sometime and see what we’re all about.

***
Richelle Burnett is Airbnb host who lives in Bedford-Stuyvesant.