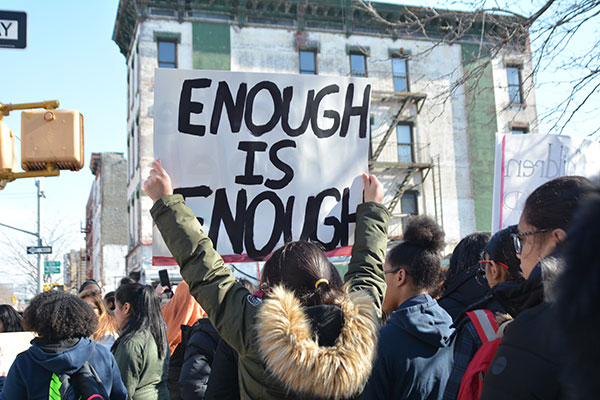 We were 12 years old when 20 children and six adults were gunned down in Sandy Hook Elementary School. One might think this a bit young to be exposed to such a raw act of violence, and experience this shift where gun violence was now becoming an American norm. We felt lucky to be living in a state where gun laws were strict and fairly well-regulated. But Sandy Hook hit us both hard. To hear about a school full of innocent children being targeted, our stomachs turned over in grief and disgust, and our eyes were opened to an entirely unfamiliar world of hatred and distrust in our government.

The ability to own guns in this country is a result of our Second Amendment. A law written in the 18th century when our government was still fresh and new, we had just won our war against England and were planning on beating back any possibility of invasion. At the time, this law made sense. Our citizens had land to defend, and we wanted to be sure our central government didn’t abuse their power and create an oppressive regime. All these reasons made the Second Amendment perfectly reasonable at the time. Now, 227 years later, the original intentions of our Founding Fathers have come to be interpreted by some as an absolute, unflinching freedom to bear arms, for almost everyone of almost every kind of weapon -- even when those arms are not in any way necessary in the day-to-day lives of Americans or likely be used to fend off invaders or an overreaching government.

We want to preserve people’s rights and freedoms, though some might assume our position intends to infringe on that. For so many years, we have had to rely on our elected representatives, and the interest groups and lobbyists linked to Congress, to make real, national change on our behalf. They have failed us.

Our next congressional election is this coming November. With 470 seats up for grabs, and more than 2,400 candidates running, as newly-minted voters we realize that this fall we get the opportunity to choose who goes into those seats. We no longer have to put our trust into the people who have been letting us down and neglecting our safety year after year. Having the lives of American children threatened constantly, and the impending fear of possibly being the next victims of gun violence, has driven us to step up, and speak to our generation to finally make a call to action.

We first took steps to make sure that the March 14 walkout was not only happening in our schools but in others across the city. We provided students that didn’t have the resources or the ability to plan their walkouts with step-by-step instructions on how to conduct their own walkouts so they could make them as effective and powerful as possible while still remaining safe. In this process we found each other and together we created a platform we call Generation Z.

We’ve gathered over 2,000 kids and counting across the Greater New York Area in over 20 different schools and counting to ensure the work doesn’t end with the walkouts.

We have been working on policy points related to gun reform that need to be put in place, including the full implementation of background checks; the removal of military grade weapons and high capacity magazines; preventing teachers from being armed in schools; stricter regulations that would prevent the trafficking of guns into our state; better reporting of domestic violence convictions and enforcement of current laws barring those convicted of domestic violence offences from owning guns; and the removal of metal detectors, specifically within schools in communities of color, and replacing them with better school mental health departments.

We want Generation Z to be the platform we never had, and we don’t want to stop with the walkouts. We continue to raise money to go to Washington, D.C. to be heard on Capitol Hill. We want Generation Z to tackle the problems that we never had the opportunity to voice ourselves. We hope to gain the support of the adults in our communities, especially those with the means and privilege to help, to fulfill our mission to travel to Capitol Hill and to advocate for, and implement, much-needed change. We plan to show other young adults how to exert their power as voters and ensure progress is made. We are the future. We will be heard. We are Generation Z.

***
Amanda Delaney and Ella Marion are members of Generation Z. On Facebook: Generation Z for Gun Reform and on Instagram: @genz4gunreform.