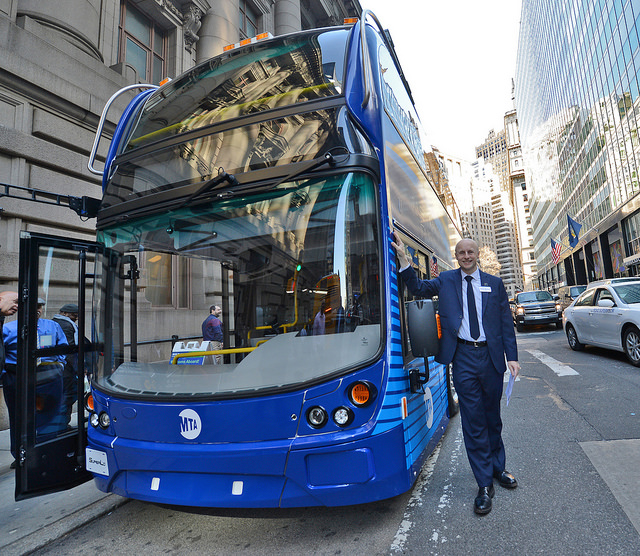 In the Big Apple's transit circles, Andy Byford has quickly become the hottest London import since the Beatles. New York City Transit's new president, brought in this winter from his job as the head of the Toronto Transit Commission, faces the unenviable task of fixing the city's ailing subway system and restoring faith in its vital transit network. Just three months into the job, Byford is moving at a breakneck pace, and on Monday, he unveiled an ambitious plan to speed up New York City's snail-like local buses and fight the tide of declining ridership.

The plan sets the bus system on the right road toward improvement but will require city and state cooperation and a change in NYPD culture, two elements in short supply these days that could torpedo Byford’s best efforts. It is also likely to require more money, which is also in short supply.

The New York City bus system is a curious thing. It is notorious unreliable with buses that crawl through city streets stopping every two or three blocks and with average speeds that barely exceed eight miles an hour. With infrequent and unreliable service, ridership has declined by nearly 10 percent since 2012 and 15 percent since 2002. Still, over 2 million riders a day rely on the city's buses, and the bus system needs to be fixed.

Byford's bus plan comes after nearly two years of heavy lobbying from the Bus Turnaround Coalition, a joint effort by the Transit Center, Riders Alliance, Straphangers Campaign, and Tri-State Transportation Campaign. In 2016, this group called for an overhaul of the way buses work in New York City, and in 2018, Byford acknowledged its work in unveiling his plan. "We’ve listened to our riders’ concerns," he said, "and are working tirelessly to create a world-class bus system that New Yorkers deserve."

So what exactly is the plan? For now, it is an aspirational approach to better bus service with a 28-point agenda.

Byford wants to redesign the network by optimizing routes based on ridership needs while eliminating some stops to speed up service and expand off-peak bus frequency. He wants to implement infrastructure upgrades that prioritize buses over other vehicles, including dedicated lanes and a signal prioritization system that allows buses to hold green lights or shorten reds. He calls for NYPD cooperation and effective traffic enforcement, and he proposes a faster boarding process, currently a main source of delays.

To reduce bus dwell time -- the minutes a bus spends sitting at a stop while riders dip their Metrocards or scrounge around for $2.75 in nickles, quarters, and dimes -- Byford suggests all-door border, similar to London's bus system; a tap fare payment card; and cashless bus fares. The final parts of the plan involve customer-focused improvements including more real-time bus countdown clocks, redesigned system maps, and more bus shelters along with some clean-tech buses to replace New York's current gas-guzzlers.

On its surface, the plan is exactly what New York needs. Byford has shown that he understands the problems and drawbacks with the current bus network and is willing to propose a multi-part solution that involves every stakeholder and seemingly transcends the dysfunctional politics of the relationship between the city and state. But unfortunately with such an aggressive plan in play, each of these stakeholders are going to have to work together for this bus revitalization effort to succeed.

And to that end, except with respect to the all-door boarding and other technological upgrades to the buses themselves, Byford is now almost a bystander as he has shifted the onus to the city Department of Transportation, the NYPD, and Albany lawmakers to work together to realize his vision of a better bus network.

Let's start with the city's Department of Transportation. Since DOT controls the city's streets, any changes to the way street space is allocated will have to start with DOT. Thus, additional bus lanes, dedicated bus corridors and the queue-jumping benefits of signal prioritization require DOT buy-in and support, and so will reducing the number of bus stops and changing street design to better support bus infrastructure. NYC DOT Commissioner and MTA Board member Polly Trottenberg voiced support for the plan during Monday's meetings, but her boss, the mayor, a reluctant and infrequent transit rider who virtually never takes the bus, will have to be a forceful ally supporting these changes.

And then we have the NYPD. Currently, the NYPD seems to view the city's bus lanes as, well, parking spots. Take a ride down the East Side's avenues, and bus lanes will inevitably be filled with cops who have decided to park in curbside bus lanes, thus negating their intended purposes. The MTA, on the other hand, expects cops to be willing partners in enforcing bus lane restrictions and generally helping to ensure that other vehicles are not in the way of buses, impeding speeds and progress through congested city streets.

But cops alone are a poor and inadequate enforcement method, and NYPD culture is tough, if not impossible, to change. Thus, Albany takes center stage as bus lane enforcement should be automated and camera-based. Until now, the state Legislature has resisted giving the MTA carte blanche ability to install cameras that can assist in automated bus lane enforcement, but to truly tackle the problem of cars in bus lanes, Albany will have to act, and forcefully.

Finally, the elephant in the room is the cost. We do not yet know how much the bus plan will cost. It relies in part on moving pieces that are funded (such as a new fare payment system) and others that are not, and it will again be up to the governor to champion transit improvements in New York City so that they receive adequate funding. Facing the pressures and, more importantly, the headlines of a primary challenge, Andrew Cuomo has lately embraced certain positions he has rejected in the past, and mass transit support should be one of them. Perhaps, then, the time is right for the city and state to prioritize bus travel over car traffic.

Ultimately, the buses need fixing, but more importantly, the bus system needs to work efficiently so that New Yorkers have faith in it again. Buses can solve access problems in transit deserts and can be a part of the transit upgrades that a true congestion pricing plan would require. Byford has a vision that will improve bus service, but that is the easy part. Now he just has to convince everyone else to join him as well.

***
Benjamin Kabak is the editor of Second Ave. Sagas, on Twitter @2AvSagas.