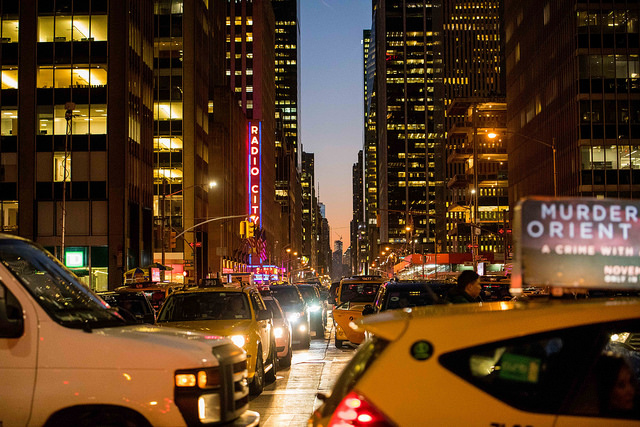 New York City’s Department of Finance announced last week that it is moving to reduce the discounts it gives to commercial vehicles through a 15-year-old program that gives companies like Verizon and Fresh Direct a bulk break on parking tickets.

City officials say that the program’s new, higher fees will help reduce congestion by raising the pain for trucks that are double-parked or otherwise blocking traffic, as well as raise revenues by a relatively small amount: $17 million annually. They have sweetened the pill by creating a $120,000-a-year parking czar who supposedly will act as the ticket-payers’ advocate.

But the measure is too little, too late. The problem with the Finance Department’s parking programs -- one is for companies that make short deliveries and another for those with trucks that might stay longer -- is not lack of enforcement; it’s their very existence. New Yorkers should tell their representatives to end, not mend, these inherently unfair, road-clogging, fume-producing programs. A bill pending now in the state Legislature, sponsored in the Assembly by David Weprin (D-Queens), would do that.

Why are the city’s bulk-discount programs for parking tickets so unfair? Aren’t they good for businesses that make deliveries?

Much has changed since Mayor Bloomberg created the programs back in 2003 -- our shopping habits, for one. In the days before massive online shopping, a delivery might be a quick curbside hit by a van. Now, big trucks will park in no-parking zones for hours, as workers unload hand-truck after hand-truck. Traffic crawls around them. Congestion leads to more congestion -- and air pollution, as all kinds of vehicles sit idling.

The parking scofflaws also adversely affect safety for motorists, cyclists, and pedestrians, especially disabled people who must negotiate round the trucks and who depend on unfettered access to parking.

The programs also hurt the little guy. The average citizen does not get to enroll in the programs; we have to fight infractions in hearings or hire agents (like my firm) to do it for us. And higher fees for tickets also will hurt the smaller firms in the program, forcing them to spend more time in court.

The biggest losers may be the taxpayers. The city estimates that it settled almost half of the 3 million tickets incurred by businesses in the programs -- revenues that could have added up to $100 million to city coffers annually. When the city zeroes out tickets through the programs, it also expunges a $15 surcharge on all tickets mandated by the state, which funds anti-drunk driving education, help for indigent defendants, and domestic-violence programs. That deprives the government of another $45 million or so annually.

For all these reasons, these outdated programs amount to corporate welfare we can ill-afford, and they breed cynicism about our traffic laws. Why do some get their fines reduced as part of the cost of doing business, while everyday people pay full freight, so to speak?

Tell your representatives that the meter has run out on these programs.

***
Glen Bolofsky is the CEO of parkingticket.com, a nationwide, web-based service that disputes parking fines.