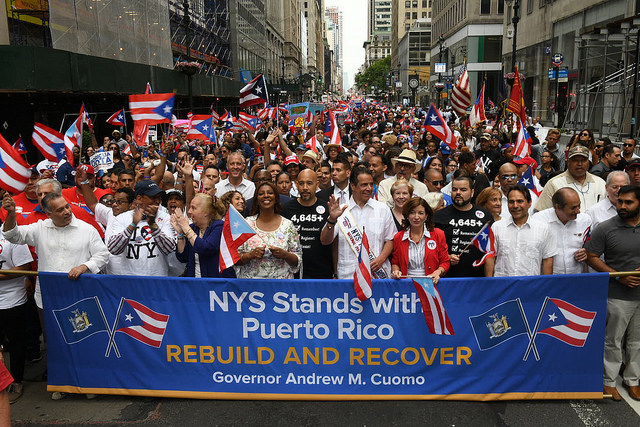 Loíza is a town on the northeastern coast of Puerto Rico, home to almost 30,000 American citizens. For 72 hours last September, as Hurricane Maria ravaged the island and other territories in the Caribbean, Loíza and all of its residents became isolated from the outside world when the three main roads that connect this medium-sized town to the rest of the island became impassable.

The challenges that residents of Loíza faced and continue to deal with are not only emblematic of the lack of resources invested in rebuilding efforts and the crumbling economy hindering the island's recovery, but also of the resilience and resourcefulness of the Puerto Rican people.

Last March, I returned to my native Puerto Rico to see the impact of the disaster firsthand. I visited six different towns across the island, including Loíza, and with a great deal of frustration and heartbreak, I confirmed what I had feared: the inadequate and anemic responses from the federal government and the island’s central administration have left almost 3 million Puerto Ricans on the island and their local governments to fend for themselves.

Thousands, especially those in low-income communities, continue to suffer from unreliable electricity and water systems, food and resource shortages, and serious mental and physical health emergencies. Considering this, it should come as no surprise that the real number of storm-related fatalities is closer to 4,600 souls, according to a recent Harvard University report, as opposed to the 64 official deaths counted by the U.S. government.

While the trip was disheartening in many ways, it was also inspiring and hopeful. I met several mayors, nonprofit organizations, scholars, labor leaders, and dedicated individuals whose steadfast leadership in helping Puerto Rico recover has been nothing short of heroic. Together, they have slowly built an important grassroots recovery movement that has made significant progress despite minimal resources.

For instance, Taller Salud, a Loíza-based nonprofit organization seeking to ensure the physical and emotional well-being of low-income women and girls, saw its mission transform out of necessity, becoming a critical emergency response provider giving out life-saving assistance to thousands.

To put it plainly, Puerto Ricans do not need or want charity. What they need is our support to further invest in those leaders and communities working tirelessly to implement innovative visions and projects locally. They want to maintain full agency over how their hometowns and infrastructure are rebuilt. We do not need to tell them or show them how to survive or thrive -- what we need to do is augment their ability to do what they have already been doing.

Many states and cities across the mainland United States have stepped up to provide support in the face of the failed response by our federal government. I am proud to say that New York has done this and in spades.

Our State and City governments, along with elected officials across all levels of government, local nonprofit organizations, civic leaders, and many New Yorkers launched an extremely dynamic relief effort, which continues to this day. From millions of dollars in monetary donations, to collecting tons of essential items, to sending highly qualified emergency responders, medical staff, and expert personnel to help rebuild the island’s decayed infrastructure, New York has led by example as to how to coordinate a comprehensive relief response and empower the Puerto Rican people to take the lead in its recovery efforts.

During a recent meeting of Governor Cuomo’s New York Stands with Puerto Rico Rebuilding and Reconstructing Committee, I joined my fellow committee members and Governor Cuomo’s administration to identify a list of priorities and recommendations to help facilitate Puerto Rico’s rebuilding efforts.

As a result of the recent committee meeting, I penned a letter with members of the Senate Democratic Conference urging SUNY and CUNY to extend their in-state tuition credit program. This program aims to ensure that Puerto Rican and U.S. Virgin Islands students who relocated to New York are able to continue their higher education for the next academic year. Last week, SUNY extended the program and CUNY is expected to do the same imminently.

Puerto Ricans have not only seen their lives completely torn apart by a natural disaster, but also by the criminal inaction of our federal government. While the road to recovery will be long and filled with challenges, the spirit of my fellow Boricuas remains intact. At a time of such darkness, the clarity of their ideas and their commitment to rebuilding is worthy of support. The goal of the diaspora, and all who seek to help, must be to empower our Puerto Rican brothers and sisters to transform and improve their neighborhoods and towns as they see fit. The storm and this administration have dealt a painful blow to Puerto Rico, but the island and Puerto Ricans endure.

***
Gustavo Rivera is a state senator representing part of the Bronx and a native of Puerto Rico. On Twitter @NYSenatorRivera.