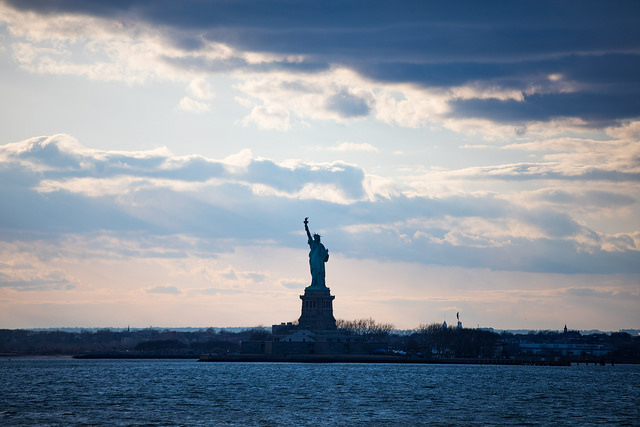 New Yorkers are constantly complaining about the two-party political system. Democratic domination of New York City politics means Democratic primary elections are more impactful than general elections. Republican domination of the national political system means New Yorkers’ progressive cultural values are rarely reflected in national politics. At the state level, Democrats and Republicans seem to have a stable alliance built on maintaining one of the most corrupt state governments in the country.

Clearly the two largest political parties aren’t working for us, so what about the third: the Libertarian Party, which is has over 500,000 members nationwide? The Libertarian Party is more than twice the size of the fourth largest party, the Green Party, and more than 10 times the size the Democratic Socialists of America. Around 20% of Americans self-identify as “libertarian.”

The lack of Libertarians in New York City presents New Yorkers with a massive opportunity: to build a new local political party that can have instant national reach, national operational infrastructure, and a rapidly growing base of support in increasingly relevant western battleground states. This party wouldn’t and shouldn’t look like Libertarian parties in suburban and rural communities but something new: culturally progressive with a can-do, data-driven, startup-style, open-source attitude towards solving our city’s biggest problems. If the rural Libertarians think we’re not “real” Libertarians, then they can move to New York City and defeat us in county elections.

My plan for a relevant Libertarian Party in New York City rests on three concepts: social tolerance, open and participatory governance, and municipalism.

Each of these concepts is consistent with National Libertarian Party ideology and with the interests of urban voters. If we can fuse the two together, we can create a new political coalition to challenge the authoritarianism coming out of Washington, D.C. and the corruption pervading our two party system.

Social Tolerance
Many people think that libertarian culture and big city culture are at odds because libertarianism is so often framed as a philosophy rooted in rugged self-reliance and individual autonomy, but that’s mostly myth. In reality, libertarians are much more interested in well-functioning markets and how complex, interdependent systems produce so much abundance. If you don’t believe me, read “I, Pencil.”

New Yorkers know better than anyone that people can successfully organize themselves through market activity because that’s how our lives are possible. We rely on complex systems for everything: food, water, transit, employment. Yes, that means we also rely on government-produced systems, and that’s fine because the “big city libertarianism” I’m arguing for respects regional autonomy. More on that later.

The single, unifying, core principle of libertarianism is that individuals should be free to do as they please as long as they don’t harm others. Sometimes this is called the non-aggression principle. Other times it’s referred to as just plain old “tolerance and acceptance.” New Yorkers embody this spirit more than any other place I’ve been in America. We love diversity and it’s myriad of benefits. We also can tolerate crowded, sweaty trains filled with strangers from all over world, and we’re constantly teaching visitors and new residents to do the same. That’s what becoming a New Yorker is all about: learning tolerance for (and even love of) diverse lifestyles, races, genders, ethnicities, cultures, philosophies, religions, et al, -- because if we don’t have it our cities simply couldn’t function.

Everyone is tolerant when it’s popular, but people are surprised to learn that, at a national level, the Libertarian Party has walked the walk: nominating the first female presidential candidate in the 1970s, supporting gay rights in the 1980s, leading the fight against the drug war and mass incarceration in the 1990s, and opposing the war in Iraq in the 2000s, Obama’s drone wars in the 2010s, and Trump immigration policies today. The New York City Libertarians can and should lead on issues of mass incarceration and police militarization, and offer something no political party has yet -- a powerful solution: ending the drug war.

Open and Participatory Governance
Our political and governmental operating systems are outdated, and need to be redeveloped for the era of the internet. Both the Democrats and the Republicans are too invested in the old system to be able to produce any substantial reforms. If we look around globally, we’ll find that some of the most aggressive and successful reforms came from the Occupy-style movements that spread throughout the world around 2010-2014. While Occupy was framed as a leftist movement in the United States, in other places it was much more obviously an anti-corruption movement that used anarchist organizing principles. In many places alumni of these movements have taken power.

Examples include Madrid, where movement activists won elections and embedded themselves in the city government and implemented an ambitious e-governance system that enables the public to control the legislature through a direct-democracy style app. Another example is in Taiwan, where activists took over the national parliament for a month during the “Sunflower” movement, won concessions from the government, and have implemented a nationwide participatory democracy program that is the envy of the world.

What these movements have shown is that there are solutions to the question of democracy: but those solutions will destroy the politics of patronage, where politicians acquire resources from taxpayers and distribute them to their constituents, and instead require a politics of participation, where politicians use technology to convene stakeholders, determine public sentiment and then perform the will of the people, even if that means suppressing their own opinions and interests. That’s a different job description for which many existing politicians would not apply.

The other major trend in internet-enabled government is the spread of “digital services organizations” and their uniquely effective method of bureaucracy reform. By using open source technologies, lean development principles, service design methodologies and other “startup-style” tools, DSOs are implementing technical systems that will, ultimately, radically transform how government is administered: reduce the need for certain types of skill sets, automating processes and making services faster, better, and cheaper.

The political establishment and agency bureaucracies have been extremely hesitant to resource these DSOs because their work is shifting power from closed bureaucracies to open systems. As such, neither establishment party can give DSOs the support they deserve. But Libertarians can! We want government to operate faster, better and cheaper -- and if that means government workers lose their jobs in the process, that’s fine. Give them a universal basic income and let's move on. 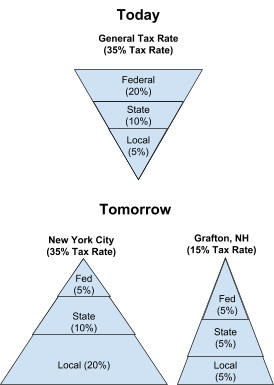 Municipalism
With Trump as president, many city residents have awoken to the fact that there are many layers of government -- and these various layers don’t always agree or collaborate with each other. They’re realizing that they’d much prefer a structure where the federal government has less power and municipal governments have a lot more. This “municipalism” is entirely consistent with libertarianism for two reasons. First, it localizes power and decreases the number of people each politician represents, making politicians and government more accountable. Second, it reduces the size and scope of the federal government, which is something every Libertarian supports.

By advocating at the national level for more local control, we align ourselves with a political program that spans the nation: urban and rural, progressive and conservative. Local control shouldn’t simply mean more policies are determined at local levels (although this is obviously a part of it), but should result in restructuring the tax system to shift the destination of tax revenue from the federal government to state and local governments.

I call this “flipping the pyramid.”

In circumstances where rural and suburban communities don’t want or need big local governments, they will pay significantly lower taxes. Meanwhile, people in cities who do want lots of government services can increase their local taxes to pay for those services, without increasing the total amount of taxes they pay. Don’t want to pay taxes? Leave the city! This act of voting with one's feet is the oldest type of democracy, and the idea that people should actually get up and move from places that don’t share their values to places that do should be embraced (and maybe even subsidized).

We’ve seen what happens when we try a “one-size-fits all” model of federal policy: Washington, D.C. has been gridlocked for over a decade, the culture war is nastier than ever, Donald Trump is president, and it seems only the mega-rich are getting what they want from the political process. Instead, let’s allow for the “regional differentiation” that will naturally arise when localities have more power to determine their overall tax rate.

Maybe some cities will become hotbeds of socialist policy, and some rural communities will devolve into total anarchy. While that might sound drastic or raise the spectre of places becoming truly inhospitable to certain types of people in ways that they currently are not, we should recognize that (a) this process is already well underway for middle and upper class people who can afford to move, (b) our nation’s structural resistance to regional differentiation has led to our current political climate and (c) this approach will encourage and incentivize politically-minded people to shift their attention from the national political circus and get involved in local and state politics.

I am not advocating for the federal government to stop performing any of its constitutionally mandated or critical functions such as upholding the civil and human rights of U.S. citizens, investigating corruption of state and local officials, regulating interstate commerce, helping with disaster relief, and organizing national defense.

Rather, I’m advocating for a visioning process where we redraw the appropriate scope of local, city, regional, state, and federal powers.

While working to implement this new vision, we should also be investing our time and resources into upgrading the capacities of local, state, and regional governments so they’ll be able to absorb new responsibilities. Anyone involved with local politics knows that it can be just as corrupt as national politics, if not more so. That’s why our strategy must also include a movement to transform local governments into open, transparent and participatory institutions that good people want to lead. We can have that battle on our home turf instead of D.C.

New Yorkers, and urban residents throughout the country, deserve a culturally progressive, entrepreneur-friendly, open-source political party, and the Libertarian Party can be just that. There are no Libertarians in New York City interested in stopping us. I’m the chair of the Brooklyn Party, we’re collaborating actively with the Manhattan Party, and this weekend we’ll be taking our plan to the Libertarian National Convention in New Orleans to find allies and develop a more nuanced understanding of potential opposition to our plans.

In politics, opportunities can come from where you least expect them: maybe that’s the Libertarian Party in America’s big cities. Come find out by attending our monthly meeting in Brooklyn and the meetings of other chapters around the city.

***
Devin Balkind is the chair of the Brooklyn Libertarian Party. He was the 2017 Libertarian candidate for Public Advocate. On Twitter @DevinBalkind.