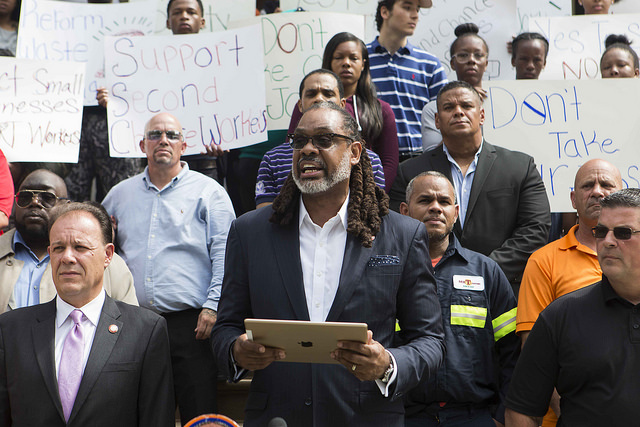 New Yorkers have good reason to be concerned, even angry, about the state of affairs in our city's commercial waste industry. Stakeholders and commentators are absolutely right to note that, among other issues to address, the tragic loss of life in this industry is unacceptable.

However, agreement on the importance of cleaning up commercial waste carting does not change the fact that a huge question is still on the table: How can we actually achieve our shared goals as quickly and effectively as possible?

In many ways, the answer lies in comments made just this week by Mayor de Blasio, when he said, "I hope that we can really strengthen the hand of the Business Integrity Commission, give them a lot more tools, a lot more teeth to work with in their regulation of that industry."

My colleagues in the City Council and I have introduced legislation, known as Intro. 996, which would do that by empowering the Business Integrity Commission (BIC) to raise standards in the commercial waste industry and hold bad actors accountable.

Our bill would enable BIC to create standardized safety certifications for industry employees and institute requirements that ensure workers are properly trained. It would also give BIC the tools to establish clear rules regarding allowable levels of emissions for commercial waste trucks. Additionally, the bill would empower BIC to more stringently regulate the industry with regard to maximizing efficiency along each waste collection route.

These are just several examples of how Intro. 996 would give BIC more of the tools and teeth that Mayor de Blasio has said are necessary for advancing commercial waste carting reforms. Our legislation would also let BIC establish its own task force to offer additional insight and recommendations for continuing to improve this industry over the long-term.

On the other hand, Mayor de Blasio's own Department of Sanitation has offered a nebulous and flawed proposal to develop commercial waste zones, which would replace the industry's current open market system with a series of geographic zones that are exclusively contracted to a small number of waste carters.

First, Sanitation’s proposal is not squarely focused on advancing the mayor's stated goal of empowering BIC. By relying on a fundamental restructuring of the industry, this plan would essentially take power away from BIC rather than giving it more of the tools it needs to regulate carting companies.

There is also the issue of unintended consequences. It is common knowledge by now that the zone-based waste collection plan implemented last year in Los Angeles had a truly disastrous rollout. Prices and service complaints skyrocketed, leading to a chaotic situation that, if it were to happen in New York, would surely make it extremely difficult to achieve our shared goals.

The Department of Sanitation’s own 2016 report, released as part of introducing its waste zone proposal, acknowledged that costs for small businesses that are served by this industry would increase under a zone-based plan. Additionally, the report acknowledged that zones would lead to job losses in the industry - and I do not think that efforts to increase safety have to include putting people out of work.

To be clear, I am ready to advance commercial waste carting reforms now and deliver results on increasing safety, reducing environmental impact and increasing regulatory oversight. And I want to achieve this in the way that Mayor de Blasio himself has articulated - by giving BIC more of the tools and teeth it needs.

Now is the time to translate our concerns about this industry into tangible, sensible, and effective action - we just need to get it done.