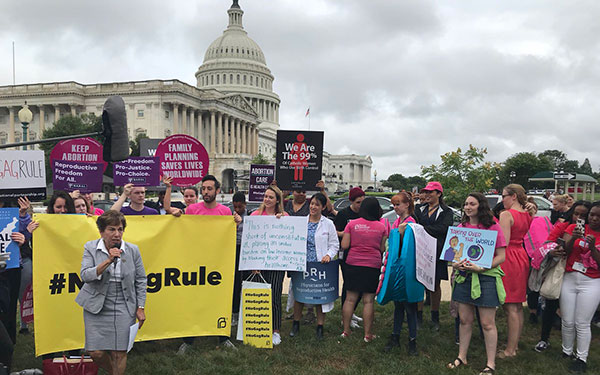 If it were not for Planned Parenthood, I’m not sure where I would have gotten critical health care services that I needed. And now, the Trump-Pence administration is trying to take that access away.

The Trump-Pence Administration recently announced a proposed new rule on the Title X federal family planning program designed to make it impossible for patients like me to get birth control or preventive care from reproductive health care providers like Planned Parenthood.

With the resignation of Supreme Court Justice Anthony Kennedy and the nomination of Brett Kavanaugh, the future of reproductive health policy in the United States is further in jeopardy. Title X is the nation’s family planning program that helps ensure that everyone can access birth control, STD testing, and treatment and other preventive care, regardless of income. Four million people, including 150,000 in New York City, benefit from Title X funding every year.

Under Trump’s proposed “domestic gag rule,” any health care provider who provides abortion, refers patients for abortion, or even mentions the word “abortion” would no longer be able to receive Title X funding.

In 2008, my mom was diagnosed with late-stage fallopian tube cancer, a rare gynecological cancer sometimes found in Ashkenazi Jewish women. My family was heartbroken. We not only had to worry about getting my mom better, but also finding out if this would be a disease that affected me as well. I was attending Hunter College and spent half my week going to school and the other half taking care of my mom as she underwent chemotherapy. In those chemo rooms, I learned how many women were ignored by their doctors when they shared their symptoms and how many didn't know they were genetically predisposed to this illness before it was too late.

Ovarian cancer is known as “the silent killer” and I wanted to do whatever I could to avoid being another woman who lost her life to this horrible illness. My mom's doctor informed me going on birth control pills was the only preventative measure. There was one hiccup though -- I didn't have health insurance. This was before the Affordable Care Act passed and I couldn't afford the monthly cost of the birth control. CVS charged $160 for the brand of birth control pills I needed. As a college student, it was unfathomable.

A friend told me about Planned Parenthood of New York City (PPNYC). So I went to the location downtown, nervous I couldn't afford my bill, but determined to take control of my health. I had a checkup and found out I could get the exact brand of birth control pills I needed for $20 per month. When I went to pay for my visit, I found out it was free thanks to their sliding scale that factors in a person's income. At a time when I was terrified and confused, PPNYC showed me compassion and gave me the tools I needed to be confident in my own health, while taking care of my mom and being a college student.

My mom is now eight years in remission and I graduated from college a triple major. As a writer and performer in New York City, I still use Planned Parenthood of New York City today for my health care. I'm so grateful to be able to continue to have this resource in my life and I lend my voice whenever possible so it can continue to have its doors open for all people, regardless of gender, immigration status, or ability to pay.

The Title X program helped me access affordable birth control from PPNYC, and we need to fight to make sure this program continues to help people like me. In New York, Planned Parenthood serves 52% of patients who get care through Title X. It includes critical preventive services like birth control, cancer screenings, STI testing and treatment, and well-woman exams. It has bipartisan support and is part of the reason we’re at a 30-year low for unintended pregnancy in the United States.

The Trump-Pence Administration doesn’t care how many people they hurt. A domestic gag rule on Title X providers would have devastating consequences and threaten health care for millions. All people deserve access to high-quality health care and critical, medically accurate information about their bodies.

Planned Parenthood of New York City was there for me when no one else was, and helped me take control of my future. I proudly stand with them as they fight against these regressive policies that take away our right to make the health decisions best for us. You can join us in the fight for our reproductive health care by posting a public comment to the Department of Health and Human Services site by July 31 demonstrating your opposition to the domestic gag rule and why each and every one of us deserves reproductive freedom.

***
RoseAnn Fino lives in Astoria and is a patient at Planned Parenthood of New York City.