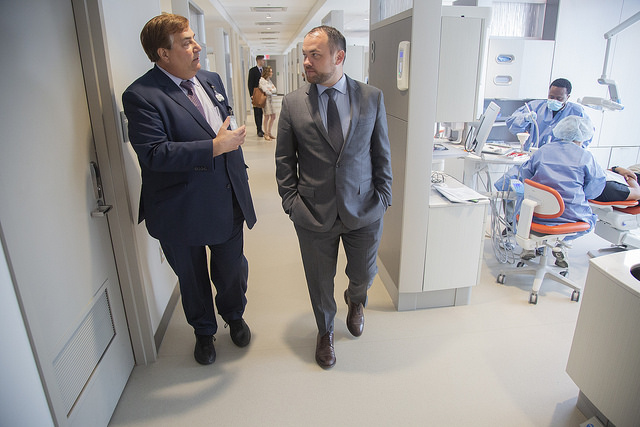 Health care for all is a human right. This means no one should be denied care based on their ability to pay.

The World Health Organization recognized this fundamental truth 70 years ago, most countries around the world have been putting it into action for decades now, and doctors and nurses live it out professionally every day.

Truly achieving this moral imperative means we need a universal health care system supported by taxes and administered by one provider. Not only is this the right thing to do, it’s also more practical and less expensive than the status quo.

A recent study conducted by the RAND Corporation shows that single-payer is likely to save our state health care system $15 billion by 2031 compared to our current system. Other estimates project savings of up to $45 billion.

For these reasons I introduced a resolution Wednesday urging our state government to approve a law that would lay the foundation for single-payer healthcare in the Empire State. The proposal would create the New York Health program, which, if fully implemented, would result in 90 percent of New Yorkers spending less on health care than they currently do.

The plan would help save New Yorkers money by cutting administrative costs and simplifying the present system. Approximately one million New Yorkers are without any health insurance and have essentially been priced out of the market, which is another practical reason why I support this legislation. Also, you, the patient, would pay no premiums, deductibles or co-payments when visiting a doctor under the new system.

According to the RAND study, New Yorkers could spend half as much money out of their own pockets under the New York Health program than they do within the current system. In fact, according to a relatively conservative scenario, New Yorkers with an annual household compensation of less than $105,300 would save about $2,800 per person every year. Other estimates project even greater savings.

Single-payer is traditionally viewed as a progressive cause, but it has earned support from conservative quarters too. RAND, which was originally founded to provide research to the armed forces, isn’t exactly a progressive endeavor.

It is also worth noting that New York is a relatively wealthy state. Our economy is the third largest in the nation, behind California and Texas. And with a gross domestic product of $1.56 trillion, our economy is comparable to Canada’s, which has a $1.65 trillion GDP.

That kind of prosperity is an advantage few states – and few countries, for that matter – enjoy, and it’s one we should leverage so as many New Yorkers as possible have access to good health care. Failing to do so would be an abdication of our responsibility as elected representatives.

The current landscape is complicated and there are a lot of moving parts, but complexity shouldn’t be the enemy of what is right.

President Trump’s administration has signaled it would oppose single-payer plans from state governments seeking to bring sanity to their respective health care landscapes, so it is unlikely his administration will grant New York the federal waivers needed for a single-payer system to be fully implemented here.

However, even without a waiver, the state could still ramp up the program on a partial basis and, in the process, save money for current Medicare and Medicaid recipients through improved, wrap-around coverage. It would also lay the framework for full implementation of the plan under a new president.

Critics on the other side of this debate have also argued that adequate health care shouldn’t be considered a right – that it is a finite resource and can’t be placed in the same category as voting or free speech.

Many human rights we now take for granted in the United States weren’t considered rights at all during various periods of history. But eventually we evolved to see them as such.

The right to vote, freedom of speech, the right to assemble – these are now encoded into our nation’s DNA, but over the course of world history this wasn’t always the case.

Even today, not everyone on earth has the right to vote. Many Americans didn’t have that right immediately after our nation was founded.

But we’ve made progress – often that progress comes too slowly, but there is no progress until we take the first steps forward.

Adopting single-payer healthcare in New York State would be an enormous step in the right direction. This is why I am standing with my colleagues in state government who support it, and I hope you will too.

***
Corey Johnson is the Speaker of the New York City Council and represents the Council’s 3rd District, in Manhattan. On Twitter @NYCSpeakerCoJo.