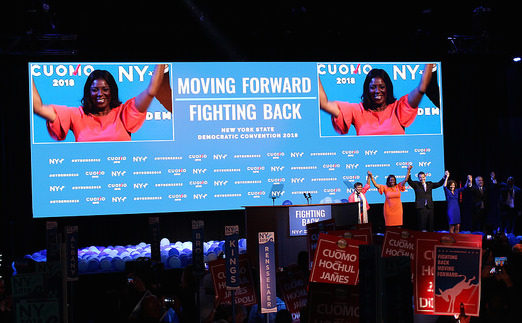 One thing is for sure about the four candidates in the Democratic primary for Attorney General: each wants to be thought of as “independent.” Witness these self-descriptions:

Leecia Eve: “An independent advocate for all New Yorkers”

Tish James: “I’ve been independent all my life”

This independent streak all intensified when James, endorsed by Governor Andrew Cuomo, prevailed for the party designation at the Democratic state convention. To diminish her resultant electoral advantage, the other three candidates sought to portray her during the primary campaign that followed as dependent upon Cuomo politically and therefore less likely to attack the pervasive corruption in state government, corruption that has reached into the governor’s own office.

It seems logical enough. Unlike most other state department heads in New York, the state attorney general is elected by the voters, not appointed by the governor (thus the claim to be “the people’s lawyer”). Lots of statewide elected offices were eliminated or converted to appointed through constitutional change over the last century and a half. Meanwhile, the attorney general remained elected. There must be some rationale, people reasoned, for persisting in this way over all those constitutional conventions. Assuring the office’s independence seemed an explanation that fit the bill.

But independence for what?

New York’s constitution is almost entirely silent on the attorney general’s job. Its powers are rooted in common law and further specified in statute. Chief prosecutor is not among them. There are some exceptions, but since the early 19th century criminal prosecution has almost always been the work of locally elected district attorneys. Read the candidates’ own campaign literature. Mostly they are not promising to prosecute corruption in Albany using powers the office has now; they are promising to seek constitutional and legal changes that would give them the powers to do this.

Then there’s the attorney general bread and butter: representing the executive branch of state government in court and advising state agencies on legal matters. Attorneys general who aspire to be governor (all of them, lately) may use their independence to decline to represent the state when they differ from the governor on policy, as was the case at times for Robert Abrams during the administrations of Governors Hugh Carey and Mario Cuomo. This caused the first Governor Cuomo to exclaim: “No candy store can be run this way. You have this massive operation called an attorney general but you can never tell when he will be willing to represent you.”

Interestingly, Eliot Spitzer as attorney general did just the opposite. At some political risk, he felt obligated to represent the state in court in defense of its then-ban on same-sex marriage even though he opposed this ban as a matter of state policy. But the point is this: “independence” may be a convenient excuse for the attorney general to decide not to do his or her job for personal or political reasons. Yet the state still must be represented; if the attorney general steps away, other lawyers must be hired to do the work.

Most New York attorneys general returned to relative obscurity after their time in office. Of the 56 who’ve served, two of the three with recognizable names (at least to the political cognoscenti) prior to the current era were attorneys general before the office was elective: Aaron Burr, later vice-president, and Martin Van Buren, later president. The third was Jacob Javits, the longtime U.S. Senator.

The office became a stepping stone to the governorship only lately, after Spitzer rediscovered the attorney general’s extensive powers under the Martin Act, passed in 1921 to counter rampant securities fraud. Because New York is an international financial capital, the state’s AG is uniquely situated to be a major player in policing the national economy. Here’s one place where independence does count. Spitzer’s aggressive pursuit of abuses by big Wall Street brokerage houses and investment banks under the Martin Act, followed by Andrew Cuomo’s and Eric Schneiderman’s after him, made the New York attorney general a nationally important figure.

Because Donald Trump is a New Yorker, the state’s attorney general is also uniquely situated among his or her peers to hold Trump accountable for his pre-presidential personal and professional financial practices. One result is the current lawsuit seeking the dissolution of the Trump Foundation for persistent illegal practices over at least a decade.

A strength of the American federal system is that it always provides a base of power in some states for the party out of power in Washington, D.C. Those who designed this system could not have imagined the complexity of our current intergovernmental federal arrangements, nor the degree to which public policy is now decided in the courts. Modern federalism has been further transformed through the use of these courts by state attorneys general to advance policy agendas.

Here again independence is key. State attorneys general of the party out of power in Washington have again and again joined in collaborative class action suites to challenge national policy and its implementation. Republicans sought to undo Obamacare, and are still at it. Democrats, with the New York attorney general in the lead, continue to litigate to block Trump administration actions on such issues as immigration and environmental regulation.

So as we New Yorkers choose an attorney general this year, we must be mindful that we are choosing a national leader to fight for New Yorkers on the key questions that face the state and the nation.

And also that we are picking a likely future candidate for governor.

As we do this we are already sure to make history, if only because every major candidate, including the Republican, Keith Wofford, is in a class protected by law against discrimination -- female, African-American, gay – from which we have not yet elected a person to hold either of these statewide offices of governor and attorney general. (Governor David Paterson, who is African-American, was not elected, but gained office by succession from the office of Lieutenant Governor after Spitzer’s resignation.)

But we need something more. We need an attorney general who makes history not just by who he or she is, but through doing the job -- with passion, energy, and the right balance of collaboration with and independence from the governor.