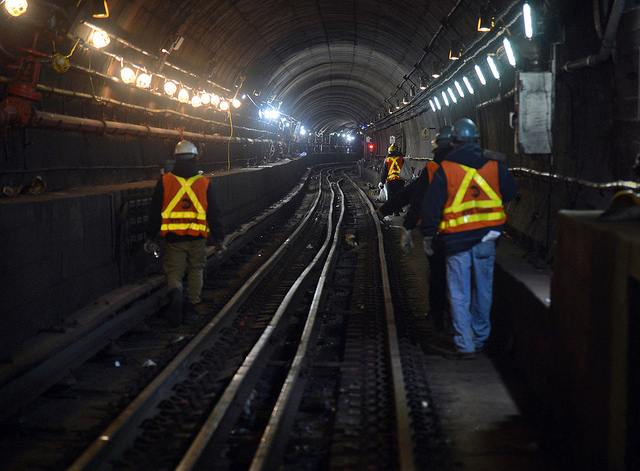 The fight to fix our ailing transit system took a significant step forward in May when New York City Transit President Andy Byford released his “Fast Forward” plan to dramatically accelerate comprehensive fixes to our city’s subways and buses. We, along with many other legislators and advocates, praised the plan and Byford’s work to create it. Fast Forward isn’t just a clear roadmap to a modern subway system; it’s also a very necessary roadmap to MTA reform.

Now it’s time for the MTA to take the next step toward transparency as the governor and Legislature begin the difficult work of finding sources for the billions of dollars necessary to pay for Fast Forward -- as well as the authority’s expected capital needs. While Byford estimates the cost of Fast Forward to be $40 billion, it is essential that the MTA provide a budget detailing the plan’s costs as well as its 20-Year Capital Needs Assessment. If state government is to do its job, we need to know what fixing our subways and buses will really cost. Without a detailed budget, the necessary revenue that must be provided to save our transit system will be unlikely to materialize and millions of riders will suffer the consequences every day.

The collapse of our subway and bus systems isn’t Byford’s fault. It is, in fact, ours. Decades of indifference, neglect, and underfunding from Albany has hamstrung our public transit and now threatens to irrevocably damage the fabric of our city. Make no mistake, without public transit; New York City ceases to be. So it is our duty to fix it.

Historically, Albany’s inaction has stemmed in part from the lack of a clear vision of how to fix public transit. Now that we have that framework in place, the final step still remains. The MTA must show us exactly how it plans to implement the plan and how much it will cost.

There have been many ideas for how to provide additional revenue to the MTA—congestion pricing, value capture, a millionaires’ tax, new corporate taxes—but not a single one of these proposals will ever gain enough support in the Legislature if lawmakers are in the dark as to the exact costs of the agency’s capital needs.

Time is of the essence. The governor will deliver the next State of the State on January 9 and the next preliminary budget a week later. The MTA cannot wait until then to submit to the Legislature its capital needs and a budget for the Fast Forward proposal. The costs of Fast Forward need to be factored into the governor’s executive budget long before its release, and the scope and importance of the Fast Forward plan requires that the Legislature is given ample time to review and hold hearings on the authority’s proposed costs well before budget negotiations begin in January.

Once the MTA shows us the numbers, then it becomes Albany’s task to make sure we raise the necessary revenues without unduly burdening already-frustrated straphangers. Unfortunately, Albany doesn’t have the best track record when it comes to securing real funds for the MTA.  The authority’s current capital budget, the 2015-2019 Capital Program, was only approved in 2016—sixteen months late—and of the $32 billion that was approved, the source of most of the state’s $8.3 billion share has yet to be identified. This type of delay and the lack of a clear identified revenue source cannot happen if we expect the Fast Forward plan to be successful.

Beyond submitting its Fast Forward and 20-Year Capital Needs Assessment budgets this fall, the MTA should submit future Capital Program budgets earlier, in order to demonstrate the need for dedicated, long-term revenue streams, the Capital Program should have a longer timeline than its current five years.

This year Assemblymember Carroll drafted and passed in the Assembly a bill, A.11094, which would have required the MTA to submit its capital budgets earlier than currently mandated—but the bill never came to a vote in the Senate. To facilitate long-term planning, the MTA should share the full cost of the 15-year Fast Forward plan rather than breaking it up into the five-year chunks.

The current system of temporary fixes is unsustainable and cannot continue. Without a budget and time for the Legislature to review it, the state will again fail to act on a concrete plan to finally fix and modernize our subway system. There might be some serious sticker shock in Albany, but it’s time for us to roll up our sleeves and get the job done. If we don’t, then Fast Forward will remain Byford’s dream, while millions of riders suffer the daily nightmare that our subways have become.