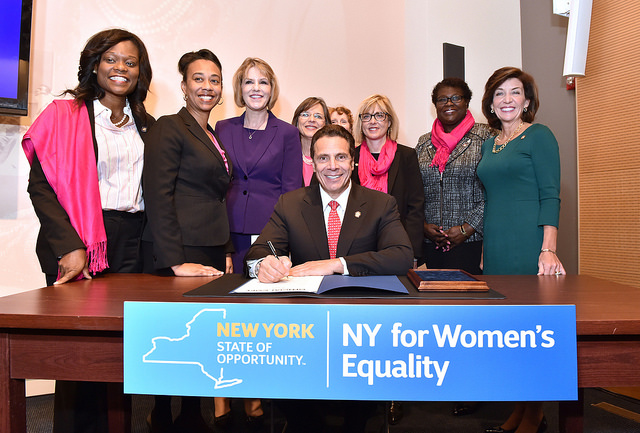 Never has the time to stand up against the attacks on women and people of all races and religions been more important. Since the election of Donald Trump, it has been critically important to protect women’s rights against the barrage of attacks including assaults on reproductive rights, attempts to restrict access to healthcare, verbal abuse towards women, and the fight for representation on the Supreme Court.

Did you know one in five women will be raped and one in three women will experience some form of sexual violence in their lifetime? Annually, rape costs the U.S. $127 billion, more than any other crime. Nearly three women are murdered every day in the U.S. by current or former romantic partners. More than half of female homicide victims were killed in connection to violence by an intimate partner. During their lifetimes, 81% of women will experience some form of sexual harassment, with more than three out of four women experiencing verbal harassment.

Last week, the Trump administration announced that it was expanding protections for doctors, nurses and other health care workers who have a moral or religious objection to performing abortion services. President Trump has appointed prominent anti-choice activists to high-level positions within the administration, and, of course, the appointments of anti-choice judges to the Supreme Court is the greatest threat to women’s right to choose.

But this is not just an anti-choice attack. The repercussions are serious and wide-ranging: rollbacks on no-copay contraception and maternity care are already taking place, and accessible health care for low-income children is at risk. Planned Parenthood is sometimes the only women’s health care provider in rural counties, offering maternal care, cancer screenings, and more. Those life-saving services are now being threatened.

The Cuomo administration’s Women’s Equality Agenda advanced critical policies to protect domestic violence victims and prevent sexual assault on college campuses, legislation to remove guns from domestic abusers and to close a loophole in state law that will ensure domestic abusers are required to surrender all firearms, not just handguns.

The passage of the SAFE Act helps our children be safer in school during a time of mass school shootings.

The passage of an increased minimum wage and paid family leave is critical in lifting up the millions of women and children living in poverty, among many other New Yorkers.

These issues, along with others of importance to women and children, are detailed on the Women’s Equality Party newly launched website, which I encourage you to review ahead of casting your ballot on Tuesday.

The WEP aims to fight the policies designed to take back hard-fought rights gained over years of organizing and legislative battles. We need your help to keep our voice strong and in the fight. All of the WEP-endorsed federal, state, and local candidates will fight to protect women and children.

The 100th anniversary of women’s right to vote is in 2020. Women fought long and hard at great personal sacrifice to win this right. Now, in New York, women finally have a ballot line dedicated to their issues. We need to preserve this ballot status and grow our voice. We will march, speak up, and win political office. We will break glass ceilings everywhere. Most importantly – we will never go back!

***
Susan Zimet is Chair of the Women’s Equality Party of New York State.