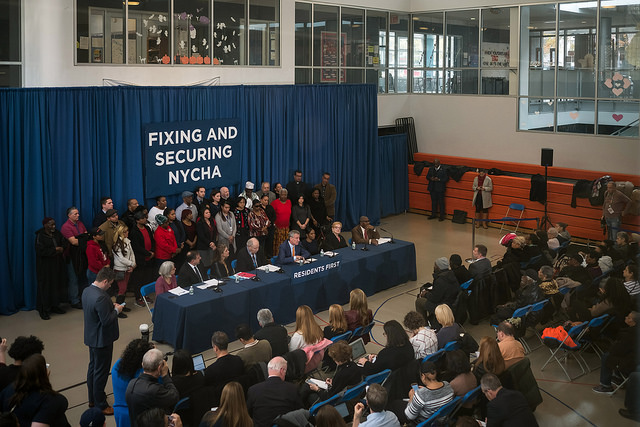 Had the Department of Housing and Urban Development (HUD), Congress, and various Presidents funded public housing at a level equivalent to its needs for the past two decades, NYCHA would still have problems, but not at the scale it does today. Nor would a progressive Mayor be wholeheartedly embracing private management of about one-third (62,000) of the city’s precious, low-cost, public housing units. The only way to understand why the Mayor, NYCHA leadership, and many local politicians endorse increasing the use of public-private partnerships to run NYCHA is to step back and view NYCHA’s problems through the wider angle of changing federal policy.

From the 1930s to the 1990s, NYCHA lobbied for and won federal subsidies that allowed it to build and manage public housing on a massive scale. Sadly, most other American cities used these same subsidies to create much smaller, lower-quality, worse managed, more isolated, and thus less popular systems. New Yorkers, by contrast, grew accustomed to the idea that a city would have 175,000 decent low-cost apartments thanks to Uncle Sam. NYCHA employees dutifully managed thousands of towers even under very trying conditions.

By the 1990s, however, New York stood out like a sore thumb. The federal government, responding to public housing problems nationally (such as those in Chicago), was now paying to knock down towers and complexes, encouraging privatization, and pouring more money into voucher programs (i.e. Section 8) and low-income housing tax credits. The whole federal funding system for public housing was redesigned from the ground up to emphasize private sector leadership in low-cost housing.

The towers in cities like Chicago and Baltimore, many of which were only partly occupied by this point, came down at amazing speed, replaced with vouchers and privately-run, mixed-income, medium- or low-rise neighborhoods. Few former public housing tenants were rehoused on former public housing sites; instead, they were mostly scattered into private housing thanks to voucher programs. New York, with full towers, a decent management reputation, tight housing market, and local political commitment to public housing, barely participated in these redevelopment programs.

The demise of large, high-rise, elevator buildings (and public housing more generally) in the rest of the United States was, however, terrible news for NYCHA. The loss of a national program and the urban political allies dedicated to expensive and publicly-run urban public housing led to systemic disinvestment. Even “good” federal funding years did not provide anything close to the needed funds for reinvestments and operations in New York, especially given the advancing age of most buildings. The shift in federal housing policy meant the cuts were permanent features of public housing management.

NYCHA officials were in denial for years. They thought they could "manage" their way out of the problems created by budget cuts until the federal picture improved -- as they had sometimes in the past. They were wrong. Looking back now we see that the dramatic declines in operating and capital funds led to the loss of thousands of experienced employees, deferred maintenance (i.e. mold, peeling paint, broken boilers), compliance failures, inexperienced hires, and more. NYCHA labor unions also successfully fought policy changes and efficiency measures that would have improved quality of life for residents.

When it comes to a massive housing system -- in a very expensive city -- less money inevitably meant lower quality service.

The Mayor's emerging plan for NYCHA 2.0 is an overdue acknowledgment that the federal funding landscape has permanently changed. There will never be a day or decade when NYCHA can from federal funds meet its $31.8 billion capital need, or even fully fund its operations. And while the City has made up for some shortfall over the past few years, to the tune of billions of dollars, it isn’t realistic to believe that the City will redirect tens of billions more of its own capital and operating funds (unless the courts force its hand) from other worthy causes.

Shifting 62,000 NYCHA apartments to private-sector management, as planned in the initial portion of NYCHA 2.0 that we’ve now seen, through various voucher programs, allows private companies to combine rents, voucher reimbursement, and federal tax credits with the money they can borrow as mortgages, loans, etc. They will apply these funds to renovating tens of thousands of apartments in structurally sound NYCHA buildings. They can shave labor costs by hiring new workers and investing in technology. They can take a harder line on rent collection and resident behavior.

NYCHA buildings clean up well under good private managers and new employees, as anyone who has visited the RAD Ocean Bay project can attest. By shifting so many apartments to the private section, moreover, private managers will relieve NYCHA of billions in unfunded capital needs, and of the management of most of its smaller developments, allowing remaining NYCHA staff to focus on the larger projects in its portfolio. The city, of course, will not face a massive bill for renovation. There is an undeniable political payoff as well: future problems at these complexes will no longer be a mayoral liability.

Many residents, local politicians, employees, and activists are leery of NYCHA “privatization.” Indeed, the NYCHA 2.0 plan, promised by Mayor de Blasio by the end of the year, needs to build in solid protections for current NYCHA residents, encourage non-profit participation in private management, and spell out the long-term fate of these apartments as residents come and go. Given the dominance of the private sector in federal policy, and the current balance of power in Washington, those who believe in purely public housing -- the old NYCHA -- will have difficulty developing an alternative and equally beneficial plan. The ball is in their court as the NYCHA 2.0 plan develops.

***
Nicholas Dagen Bloom, Ph.D. is a professor at New York Institute of Technology and the author of many books.