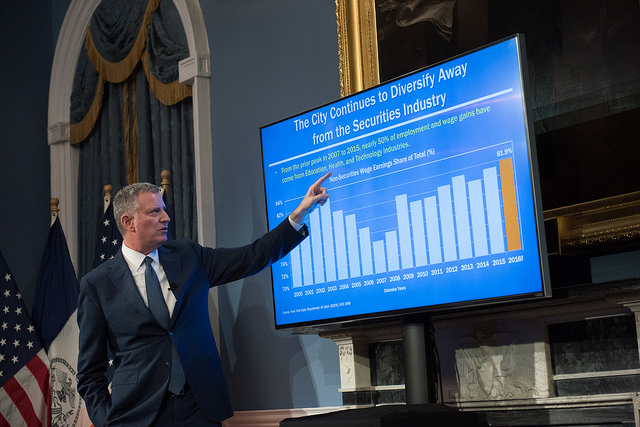 On November 6, New York City voters approved a ballot proposal to impose term limits on community board members for the first time since their role was written into the city’s Charter in 1963. The proposal was introduced by Mayor de Blasio’s Charter Revision Commission and proved to be the most contentious of the three proposals listed on this year’s ballot.

Several City Council members and one borough president, among others, argued that imposing term limits would help diversify boards that have historically failed to represent the demographics of the neighborhoods they represent. Dissenters argued that forcing the removal of long-term members would threaten the already tenuous authority of boards to oppose land use and licensing proposals that would negatively impact their communities. These folks claimed that limiting board terms would undermine the board’s institutional knowledge and would make it possible for real estate developers to take advantage of inexperienced board members.

The debate, at least because of the opposition argument, pins diversity against authority - representative democracy against an ability to get things done; it subtlety though forcefully suggests that community boards - the city’s most local formal government body, of which there are 59 across the five boroughs - cannot have both. How has it become so intractable for boards to effectively and legitimately speak on behalf of their communities, while also reflecting the composition of their communities? At BetaNYC - a community-based organization dedicated to improving lives in New York through civic design, technology, and data - we believe that disparities in information and information infrastructure play a major role in propagating this problematic dichotomy.

In local New York City governance, there is a significant power imbalance when it comes to who has access to information, who has the expertise and experience to manipulate it, and who has the authority to present it as evidence. When coming before community boards, real estate developers and business owners often gather and aggregate data to craft a narrative as to how their proposals will positively impact a community or to demonstrate how their proposals will not harm a community. Developers may suggest that a rezoning will result in a certain number of new jobs or new affordable housing units to sway a community board towards supporting their proposal. A restaurant owner may present data to argue that setting up a sidewalk café will have minimal impact on foot traffic and pedestrian safety.

Since community boards can only put together advisory resolutions, it is important for them to be able to legitimate their arguments for or against the proposals with evidence. However, many community boards do not have the technical literacy or infrastructure to fact check the presented data or to offer counter-posing statistics. With the approval of the term limits ballot proposal, their ability to do so is further compromised.

It takes time to learn the intricacies of zoning and licensing law, let alone to develop the skills to aggregate and present data in ways that can affect zoning and licensing decisions - all of which board members must accomplish on volunteered time. The fact that elected officials are concerned that diversifying board voices will undermine the board’s authority highlights a much deeper issue - that the balance of information access, expertise, and legitimacy in the city’s formal decision-making processes is far from equitable and just.

Ironically, the information and expertise that community boards do bring to their positions - rich experiential knowledge of the history, people, and problems that characterize their communities - often gets written off as anecdotal evidence or angry voices as their advisory resolutions move through the city’s processes. This evidence is often considered to lack the authority of seemingly more objective (and less passionate) quantitative data. An unfortunate consequence of discourse around “data-driven decision-making” is that numbers and statistics have become a privileged form of evidence - with little reflection on the disparities in who controls these numbers and statistics, and what other forms of evidence are undermined in the process.

This is why BetaNYC has placed community boards at the center of our vision to expand civic data literacy and advocate for civic data infrastructure in New York City.

We believe that communities are empowered when their community boards are equipped with both the knowledge and the resources they need to challenge information practices that ignore or misrepresent people and problems in their neighborhoods. Since 2015, BetaNYC has been researching the technical and information infrastructure available to community board district offices and the data training offered to community board members and district office staff. We have documented the challenges boards face in leveraging the city’s open data resources to advance their resolutions, and have outlined several specific use cases in which community boards could leverage city or state data to back up their claims.

The results of this research are summarized in a report we published in October 2017, entitled “Data Design Challenges and Opportunities for NYC Community Boards.”

Through this research, we have been able to expand our technical offerings, develop new open data curriculum, and foster new collaborations with the Mayor’s Office of Data Analytics (MODA) and the Department of Information Technology and Telecommunications (DOITT). We produced BoardStat (a 311 data dashboard), SLA Mapper (a tool to track noise complaints, underage drinking complaints, and restaurants healthgrades for bars seeking liquor license renewals), and Tenants Map (a tool that maps rent-stabilized units and housing-related 311 complaints to highlight potential tenant harassment).

BetaNYC also offers public training on how to use the city’s open data portal, how to map open data with Carto, and how to integrate open data with Census data using spreadsheets. We work closely with borough president offices to ensure that community boards know about and have access to these trainings. Finally, in October, we testified before the City Council in favor of legislation, Intro. 1137-2018, which would not only codify MODA into the city Charter, but also require that they offer training on the use of the open data portal to community boards. We are thrilled to see this legislation passed.

As new voices filter into community boards positions, it will be more important than ever to equip them with skills, resources, and tools to effectively advocate for their communities. If the new Civic Engagement Commission, the creation of which was also approved by voters through a ballot measure on Election Day, is going to provide technical assistance, it should focus on building up a new class of community board members who are digitally and data literate, savvy online/offline organizers, and great public facilitators. BetaNYC looks forward to working with boards, city agencies, and elected officials to ensure that these needs are met.

***
Lindsay Poirier, Ph.D., is the Lab Manager at BetaNYC and soon to be Assistant Professor of Data Studies at University of California Davis. On Twitter @lindsaypoirier & @BetaNYC. (Note: Thanks to Noel Hidalgo, Executive Director of BetaNYC, for advice on this piece.)