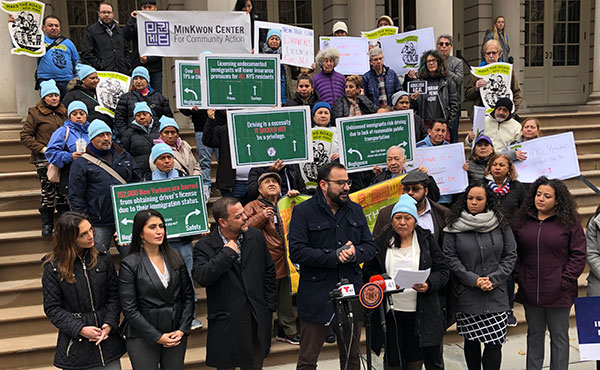 a rally for driver's licenses for all (photo: Make The Road New York)

For many New Yorkers who cannot access public transportation and need to drive, a routine traffic stop can lead to something much worse than a ticket; it can lead to deportation. That’s why restoring equal access to driver’s licenses for all New Yorkers is not controversial, it is a necessity.

All over the state, immigrants need to go to work, school, and attend doctor’s appointments, but in places like upstate New York, Long Island, and parts of New York City, a lack of public transportation means driving is the only option.

Jorge Cotraro, a father and husband on Long Island, has been forced to drive without a license because he needs to get to work, and on time, and because missing his children’s doctor’s appointments is also not something he can afford. Every time that Jorge is forced to drive, he leaves his home with fear and uncertainty if he will be able to come home to his family because a routine traffic stop can lead him down the path to deportation. That’s because interactions with local law enforcement can trigger immigration consequences, as they’re often used by Immigration and Customs Enforcement (ICE) to justify detention and deportation. And it’s why Jorge, a member of community organization Make the Road New York, has joined his neighbors to fight for driver’s licenses for all across the state.

New Yorkers should not fear that they will be separated from their family. For the first time in a decade, in January the New York State Legislature will be under complete Democratic control, with leading legislators in all chambers of state government who have stated publicly that they support restoring driver’s licenses for all. Legislation we strongly support will achieve this vital goal, and it’s time for us to move ahead and pass it in 2019.

The legislation would allow the Department of Motor Vehicles (DMV) to issue a Standard License to all New Yorkers, regardless of immigration status. Immigrant New Yorkers, regardless of their immigration status, would then be able to be properly licensed as well as operate a registered, inspected, and insured vehicle -- helping make everyone safer.

Besides being the right thing to do, this would lead to an economic boost to New York State. According to the Fiscal Policy Institute, passing this legislation would yield an estimated $57 million in combined annual government revenues, plus $26 million in one-time revenues projected as a result of people getting licenses and purchasing vehicles. It’s no wonder that 12 states throughout the country, and Washington D.C and Puerto Rico, already allow all people of a certain age, regardless of immigration status, to drive. It’s also why our neighbors in New Jersey are moving towards passing a similar measure.

Equal access to driver’s licenses for all will not only boost our economy and protect people like Jorge and his family, but it makes sense for the public safety of all New Yorkers. One of us is the ranking member of the Crime Victims, Crime and Correction committee, and it is imperative that New Yorkers, regardless of immigration status, are able to come forward to report a crime. Undocumented New Yorkers should not fear prosecution for not having proper identification when coming in contact with local law enforcement.

Support from elected officials for this effort is strong across the state. Governor Cuomo has said he supports this plan. In upstate New York, Saugerties Police Chief Joseph Sinagra and his police department have spoken in favor of the “Driver’s License Access And Privacy Act.” Brooklyn Borough President Eric Adams has expressed the urgency and New York City Comptroller Scott Stringer supports it. Many new State Senators-elect from across the state have expressed their support, making for strong momentum as the new Democratic majority takes the Senate reins in January.

It is time we take the necessary steps to protect our communities, make our roads safer, and boost our economy. It’s time to restore access to driver’s licenses to all.

***
Luis Sepulveda is the New York State Senator for the 32nd District and sponsor of the driver’s license legislation. Javier H. Valdés is the Co-Executive Director of Make the Road New York. On Twitter: @LuisSepulvedaNY @JavierHValdes @MaketheRoadNY.