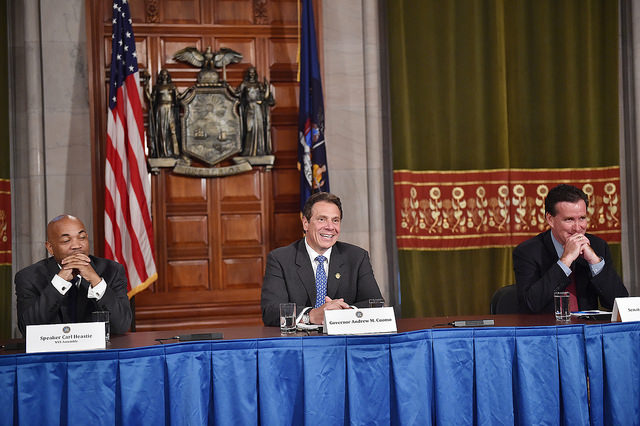 New Yorkers have been upset by state legislators’ compensation for more than 200 years. At the 1821 constitutional convention, Ezekiel Bacon, a former member of the Assembly and of Congress, called the pay issue “…a hobby horse of ambitious demagogues and peddling politicians, that caused the great questions that affected the vital interest of the state too often to be overlooked.” The current debate is nothing new. We’ve never liked how much legislators are paid. We’ve never liked how the matter is decided.

At first the decision was left to the Legislature and the Governor (who was then far less powerful than today). Public distress at the members’ generosity to themselves led to the specification of a $3 per diem rate ($56.28 in today’s money) in the state constitution by the convention of 1821. This made the pay alterable only by constitutional amendment, which required public ratification after passage in two successive legislative sessions or adoption by a following convention. The Governor, with no role in the amending process, was denied formal involvement. The people -- always skeptical, sometimes hostile -- were left with a decisive voice.

No constitutional convention held after 1821 during the period that legislative pay was still constitutionally specified -- in 1846, 1867, 1894, 1915, and 1938 -- succeeded in increasing it. Some delegates, like the publisher Horace Greeley in 1867, thought public service was sufficiently rewarded by a legislator’s “consciousness of honorable usefulness” and the “gratitude’ of other citizens. If provided at all, those who held this view believed, pay for legislators should be sufficient only to cover expenses. At later conventions most delegates, many of whom had been or were senators or Assembly members, voiced support for better compensation for legislators, but failed to act on the matter because of the  expense, or because of fear that public hostility to a pay increase would lead to overall defeat of their work at the polls. Indeed, the constitution proposed in 1915, the only one offered by a convention that included a pay increase for legislators, was rejected by the public at referendum.

In the hundred years between 1846 and the end of World War II, voters did approve two amendments offered by the Legislature providing for members’ pay increases. The first of these, passed in 1874 and supported by both Democratic Governor John T. Hoffman and Republican Governor John Adams Dix, increased legislators’ annual compensation to $1,500 ($33,030 in current dollars) from the maximum of $3 day for 100 days ($8,318 in current dollars) set by the 1846 convention. This was the first specification of legislative pay as an annual salary, not as a per diem for what was then still universally regarded as part-time work. In 1911 voters defeated an amendment calling for a salary increase to $2,500. This increase ($35,966 in current dollars) was finally passed in 1927 as part of a broad package of reforms championed by Democratic Governor Alfred E. Smith.

The provision of costs for travel was long an important element of the debate in New York over legislative compensation. The 1846 constitution provided for coverage of travel expenses to and from the regular annual legislative session. Based upon the time travel took, the assumption then was that payment for one round trip would suffice; once members got to Albany they would stay there for the session’s duration. As time passed, faster travel by boat and train made regular return to legislative districts possible. Members desirous of pursuing both political and private business sought to return home during legislative sessions, and constituents expected to see them there. But provision for payment for only one round trip was specifically retained in the 1894 constitution. At the 1915 convention, future Democratic Governor Smith asserted that coverage of the cost of members’ professional travel to assure their return to Albany during the regular session, and thus the presence of required quorums to do business, was more important to the effective functioning of the legislator than was their increased pay. Coverage of the cost of one round trip a week was finally added by the 1938 constitutional convention.

There is an established practice in New York State of paying some legislators additionally for additional work. Because they specified a per diem rate with a limit of 100 days for which members could be paid, drafters of the 1846 constitution felt it necessary to assure members got pay for added days when they were required for special sessions. They also specified that the Assembly Speaker was to “receive an additional compensation equal to one-third of his per diem allowance as a member.” In 1857 Republican Governor King’s veto was overridden to allow legislative committee members to be paid for work between annual sessions. The 1894 constitution eliminated added pay for the Speaker, but did provide it for “Senators, when the Senate alone is convened in extraordinary session, or when serving as members of the Court for the Trial of Impeachments, and such members of the Assembly, not exceeding nine in number, as shall be appointed managers of an impeachment, shall receive an additional allowance of ten dollars a day.”

An amendment passed in 1964 further constitutionalized added pay for added work; that is, what has become known as the ”lulu” system. It provided “Any member, while serving as an officer of his or her house or in any other special capacity therein or directly connected therewith not hereinbefore in this section specified, may also be paid and receive, in addition, any allowance which may be fixed by law for the particular and additional services appertaining to or entailed by such office or special capacity.”

In the immediate post WWII period legislators debated whether to try to amend the constitution to seek a doubling of salary (from $2,500 to $5,000 per year) or to seek to reinstitute the practice of legislative control of members’ compensation by statute, of course with gubernatorial approval. Either approach required a constitutional amendment. They took the later course, and succeeded. There ensued eight legislative pay raises in the 50 years between 1948 and 1998, compared to two, as noted, in the previous century.

The period of divided partisan control of state government that began in 1974 and persisted almost continuously through 2018 saw the use of many of the techniques later evident in the 2018 debate over legislative salary: employment of commission recommendations to diminish political pressure; linkage to salary increases for statewide elected officials, judges and commissioners; gubernatorial support made conditional on legislative action on other policy matters, related and unrelated; and the use of the lame duck session to address the issue, to diminish political risk. Following the recommendation of a five-person commission appointed by the Governor and legislative leaders, a bill was approved in 1979 that increased legislative salaries to $32,960 to be spread out over five years, with concomitant raises for judges and agency heads. Another was passed in 1984 in a lame duck session; it raised legislative salaries to $43,000. Governor Mario Cuomo’s support in 1987 for a salary increase for legislators to $57,500 was linked to their passage of ethics legislation that he championed and they resisted. Governor George Pataki made his support for the last increase, to $79,500, conditional on passage of legislation creating charter schools in the state.

We then went 20 years without increasing legislative salaries, the longest such period since 1948. Until the increase now moving forward, though under legal challenge and rhetorical dispute, a state legislator’s salary bought less in 2018 than it did in 1961. Two centuries of debate about legislative pay in New York have consistently been driven by skepticism about or hostility toward legislators, their integrity and their motives. Earlier reformers sought ways to discourage (or sanction) part-time legislators’ inclination to lengthen sessions to collect more per diem pay. Less was better.

Modern reformers want their legislators to work full-time, without the distractions and conflicts that arise from earning outside income. More is better. Early reformers searched for ways to encourage (or require) legislators to actually show up for sessions so that the necessary quorums could be assembled,  rather than “...play at ten pins, or sit at their hotels, or take rides to Saratoga.” Modern reformers also have their “performance standards,” e.g. timely budget passage. Yet is this really what the conversation about legislative pay should be about?

Two similar observations made almost a century-and-a-half apart are convincing in suggesting that the answer is “No.” In a debate at the 1821 constitutional convention, Robert Clarke, a former Assemblymember and delegate to the 1821 constitutional convention, argued that the goal should be to  make legislators’ pay “not so large as to be an object of cupidity, or so low as to prevent men in the middling paths of life from attending without great sacrifice to private interest…making the job only interesting to…nabobs and those having no honest employment.”

In 1984, Assembly Speaker Stanley Fink, a foremost legislative leader of the 20th century, said: ”If you want to continue [increasing] the quality and caliber of legislators on both sides of the aisle and don’t want a legislature composed by independently wealthy people or people who couldn’t hack it somewhere else you have to keep pace.”

Yet so long as the pay decision is in the self-interested hands of the Legislature itself, citizens will never believe that to attract people of competence and integrity to public service is the primary motive in setting legislative pay.

The state Legislature often lives quite comfortably with self-interested behavior: witness its devotion to gerrymandering in drawing its own district lines. But in 2018 enlightened self-interest prevailed on the pay issue, and the Legislature tried to do the right thing: it gave the decision -- not just the power to recommend -- to an independent commission, subject to a “legislative veto.” The pay increase the commission adopted is reasonable, even modest; it fairly makes up for the real erosion in legislative pay experienced in recent years. But the commission went beyond its brief; legislators didn’t ask for and don’t like the conditions it linked to the recommended raises, though there have commonly been conditions linked to raises for much of the state’s history.

And there is a bigger problem: this process is unconstitutional. The state constitution says that “Each member of the legislature shall receive for his or her services a like annual salary, to be fixed by law.” Clearly, the Legislature must set the pay itself; it cannot delegate the decision.

The lesson: right church, wrong pew. On legislative pay, as on redistricting and ethics, on all matters in which legislators are inextricably self-interested, we need a constitutional amendment to create a separate, truly independent, constitutionally-rooted body to make the decisions. This will move us toward competence and integrity in our elected institutions and help restore citizen trust in government.