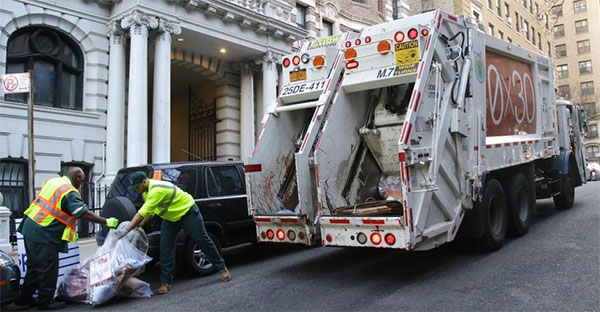 Racial segregation is still thought of as a southern issue, but sadly New Yorkers continue to face glaring examples of racial inequity in our own backyards, like the commercial sanitation industry.

A generation ago, the private carters provided middle-class jobs to a mostly white workforce. But in the years since, the industry has become mostly black and brown, and wages have dropped. A half-century after the passage of the Civil Rights Act and the end of Jim Crow segregation, African-Americans remain at the bottom of the economic ladder across the country.

On average, black families have less than one-tenth the household wealth of white families, and African-American men’s wages are less than three-quarters of white men’s wages. The gap is similar for Latino-Americans. Many of New York’s commercial sanitation workers have been involved with the criminal justice system, and are forced to settle for lower-paying and more dangerous work. Yet again: black work is undervalued, and black workers are underpaid.

These underpaid, undervalued workers tough it out in often deadly working conditions. New York City’s private sanitation workers, numbering close to 2,000, cross the city each night picking up trash and recycling at the city’s office buildings, restaurants, and shops. Because 90 different companies compete for business in this industry, stops are often far apart, and workers travel from borough to borough each night, making hundreds of pickups. The typical shift is more than 12 hours long, but can sometimes be as much as 18 hours, with six-day workweeks.

The hours would be bad enough on their own, but the private carting industry is notorious for dangerous and unsafe practices. A majority of the industry’s trucks that were inspected over the last two years were ordered off the road for major problems like bad brakes or bald tires. Crashes are increasing, as well.

One worker, a Guinean immigrant named Mouctar Diallo, died in 2017 when he was run over by the truck he was working on. Diallo had started working in the industry as a teenager and was paid less than $80 a night. His company kept him off the books, without any of the protections he was legally entitled to. When he died on the job, the company said they did not know who he was. The media reported that he was a “daredevil homeless man,” much to the horror of his mother.

It’s hard to imagine any of this happening if Diallo had been a white man, instead of a black immigrant, in a city whose proud history of welcoming immigrants is etched into its very skyline, with the Statue of Liberty’s torch a shining beacon to those “yearning to breathe free.”

New York City must live up to its historic reputation as a welcoming haven for all, including people of color and immigrants. And just as we did in the past, we need to do better by workers who do our least-valued, and yet most important, jobs.

And when New York’s underpaid, undervalued black and brown workers head home to catch what sleep they can to recover from their dangerous and unforgiving jobs, they encounter environmental racism, too.

Most of the private waste facilities, where trash is dumped before being shipped to landfills and incinerators outside the city, are located in three primarily black and brown communities: the South Bronx, North Brooklyn, and Southeast Queens. These neighborhoods get far more than their fair share of garbage truck traffic and diesel pollution, and they have the high asthma rates to show for it. A study by community activists found that at one particularly polluted South Bronx corner, a private sanitation truck passes every 24 seconds.

Last fall, the New York City Department of Sanitation announced a plan to clean up private sanitation, by dividing the city into zones and limiting the number of carters operating in each zone. The plan will cut truck traffic while allowing the city to set aggressive labor and environmental standards for the first time. It’s a good start, but our leaders can go even farther to truly protect these workers.

First, the commercial sanitation system should mirror the more efficient and professional system for residential collection, with one carter responsible for each zone and one truck picking up trash on each block. That will result in the largest reductions in garbage truck traffic on our neighborhood streets. Second, the policy should mandate fair wages for workers in the industry, so nefarious private carters cannot undercut the competition simply by paying their workers less. When the City Council takes up the legislation this spring to put the waste zone policy into action, it should pass the strongest plan possible.

The private carting companies, predictably, have resorted to fear-mongering about job losses. In reality, the policy is expected to create jobs while also transforming this work into the good jobs our community deserves. When Los Angeles enacted a similar program, it created 900 jobs for local residents.

We are two years away from the next citywide election, when politicians will come to the black community looking for our vote to put them over the top. They have the opportunity now to show us that they support our working families.