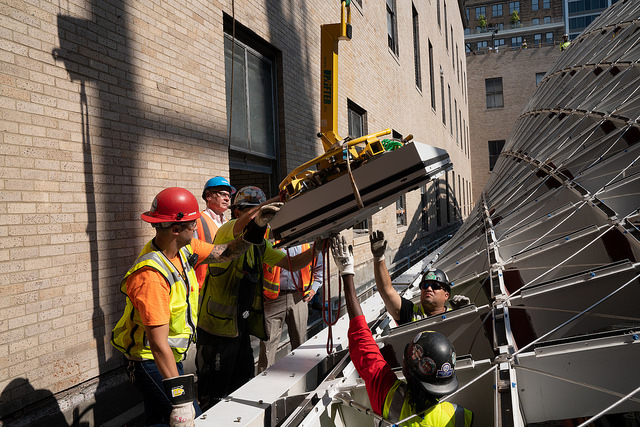 If there’s one thing that New Yorkers can agree on, it’s that we should always strive to create new jobs, not take them away. Amazon’s recent decision to withdraw its planned “HQ2” from Long Island City is an example of us failing on this front. However, public officials still have an opportunity to redeem themselves by protecting local workers from a proposed prevailing wage expansion.

Discussions are currently underway in Albany to extend prevailing wage requirements to private construction projects and could cost New York City thousands of jobs. Elected officials should heed the warnings of community leaders and push back against powerful unions that are advancing their own agenda at the expense of New York’s working class.

The dangers of expanding the prevailing wage to private work projects are numerous. First, advancing this initiative neglects to consider the negative consequences it will have on the city’s working families. In the past, Governor Cuomo has said, “Construction with public subsidies should be subject to the prevailing wage so they’re built right, they’re built fairly, they’re built union.” However, there’s no guarantee that this requirement will result in projects being built right and fairly—instead, the only thing it assures is that non-union workers are forced out of the hiring pool as developers are forced to hire union.

As a result, any efforts to extend the prevailing wage to private projects directly impacts workers of color, who make up the majority of the non-union workforce. Per industry data, roughly three quarters of non-union workers are either black or Latino and live in one of the city’s five boroughs. This is in part due to the fact that unions have historically imposed barriers to entry for people of color, which persist to this day. Just two months ago, for example, six African-American engineers at the LaGuardia Airport renovation project filed a lawsuit against the Operating Engineers Local 15 chapter for alleged discriminatory hiring practices and treatment by union supervisors.

Beyond the detrimental effects it would have on minority workers, instituting a prevailing wage requirement at private projects would actually diverge from the dominant trend in the city’s construction industry. According to our analysis of building permit numbers provided by the city, approximately 80 percent of private construction work is now being done by non-union workers.

Additionally, these workers have secured benefits on par with those of union members. On average, they earn $20 per hour, competitive health care packages, and 401(k) packages that allow them to secure their futures. Therefore, contrary to some misconceptions, opposition to prevailing wage does not equate disregard for workers’ rights.

Expanding the prevailing wage would also have a harmful effect on housing opportunities for many of these non-union workers. New York has an affordable housing shortage, and a prevailing wage will only make this housing crisis worse. The Independent Budget Office found that a prevailing wage requirement would increase construction costs by 23 percent. Additionally, such an increase would significantly alter Mayor de Blasio’s plan to create 80,000 desperately needed new affordable housing units, or simply cost an additional $4.2 billion.

Ultimately, those same hard-working New Yorkers who are being left out of prevailing wage discussions are the ones who stand to be affected most by it. Our elected leaders should stand up to powerful union interests and their agenda by securing the economic well-being of the construction industry and the workers that build it up.

***
Clark Peña is Director of Advocacy at the Construction Workforce Project. On Twitter @CWPNYC.