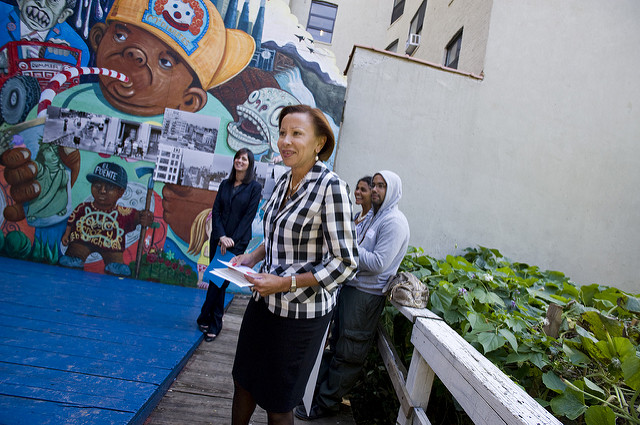 When I first ran for Congress, I faced what observers said were impossible odds. No Puerto Rican woman had ever served in Congress, the incumbent was sitting on a $2 million war chest, and I was taking on a powerful party machine determined to stop me. Yet, I won.

What guided me in that first race, and every election since, has been my neighbors’ voices, which I have continued to rely on—from town halls to street corners to knocking on doors. My opponent back then spent close to $6 million in today’s dollars, much of it coming from big corporate backers, but it couldn’t outweigh the importance of person-to-person conversations with real voters in our community.

Like anyone running for office, I’ve had to raise money over the years, but I’ve always prioritized community organizing and constituent contact over fundraising. While it has long been apparent that our campaign finance system is far from ideal, its problems have grown exponentially worse since Citizens United. That ruling set the stage for an unprecedented influx of corporate money in our political system. It also helped undermine our national political culture. The sheer volume of money aimed at influencing electoral outcomes has bred a degree of distrust among voters more severe than I can ever recall since entering public life.

This growing cynicism is bad for our city and our nation. Over the long term, I worry that corrosion of voters’ trust in government threatens our democracy’s health, weakens our civic institutions, and makes policy-making worse.

For these reasons, I have made the decision starting this year to stop taking corporate PAC money. What was true before, will be transparent forevermore: the decisions I make and the work I do is on behalf of New York’s working families; not those with a corporate ledger.

It is my belief that we are in a unique moment in our political history, making this decision the appropriate step for my campaign, right now. I am proud to join the many Democrats elected in 2018 who have already taken this pledge. Over half (36 of 62) of the Democrats newly elected to Congress last year have committed to do this, but only seven returning incumbents have joined them so far. That needs to change—and as a longtime progressive leader in Congress, I hope others will join this call.

In my fights for progressive values here in New York, I have been blessed to build community support for allies who have taken similar steps. In 2013, again facing a predatory party boss, we elected a slate of reformers to the City Council who stood against big-moneyed special interests. In 2018, we took on corporate-backed Democrats who sided with Republicans and real estate interests to elect a crop of reformers to the New York State Senate.

Throughout my time in public office, I have always taken on entrenched interests, whether it is party bosses trying to impose a chokehold on local politics or big companies seeking to undermine environmental and consumer safeguards or profit off the sick and the vulnerable. My commitment to those core values has not and never will waver. But, it is my hope that no longer accepting corporate PAC money will send a powerful message to my constituents and my Congressional colleagues that the time for additional change has come.

Make no mistake: curing what plagues our political system will require more than elected officials foregoing corporate PAC money. That’s just one piece in a complicated puzzle. For instance, I will also push for the passage of a statewide public campaign finance system in New York that bans corporate money and emphasizes small-dollar, individual contributions.

Another problem: since Citizens United, so-called Super PACs injected more than $1 billion into federal elections in 2016 alone, without meaningful transparency. Fixing that problem will almost certainly require legislation. Likewise, we need to be working at both the state and federal levels to reduce voting obstacles. Faith in government didn’t erode overnight and won’t be immediately fixed either. Nonetheless, greater transparency in campaign finance and boosting voter participation can help. Those goals will require more work, but they are certainly worth pursuing.

For now, turning away corporate PAC dollars is the right decision for me, my campaign, my community and, most of all my constituents. Ultimately, we are elected to lead and, as more members of Congress follow suit, this can be a modest, but meaningful step toward restoring trust in public service.