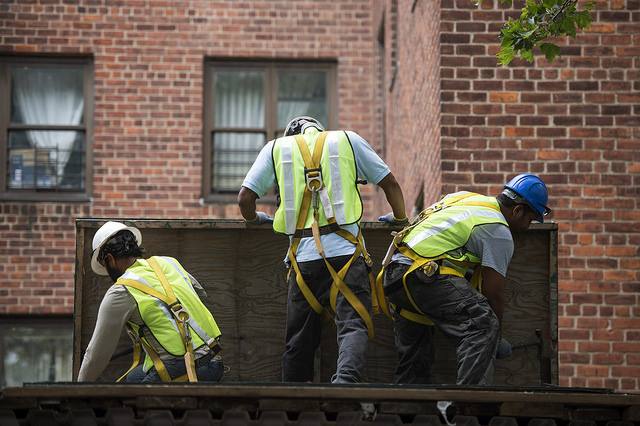 As the next state budget is being debated in Albany, increasing attention is being paid to the state’s prevailing wage laws. With so much misinformation out there, let’s set the record straight. Paying construction workers a middle class wage is a net positive for New York’s economy.

Specifically, the issue is how construction workers are paid for projects that receive public funds. Since 1897, projects receiving taxpayer funds are required by New York State law to pay fair wages to their workers. The problem is that developers are increasingly exploiting loopholes created by the growth of public-private projects, which blur the lines of what’s considered “public work.”

One recent example is the Chelsea assisted living facility on Long Island. The project received $15 million in public funding, but because that money came through the Brookhaven Industrial Development Agency (IDA), there was no requirement to pay workers a middle-class wage.

Legislation currently making its way through the legislature would close that loophole. The bill,

Chances are that you’ve seen folks in the business community argue the opposing viewpoint – but when you look under the surface, those arguments tend to rely on overly simplistic or just plain inaccurate information.

Take the industry-backed argument that paying workers a middle-class wage would force costs to skyrocket and immediately put an end to all development. When a wealthy developer complains that much about paying a fair wage, you have to wonder how little they’re actually paying their workers.

As an academic, I rely on data and evidence to form a judgment. The data show that labor costs for construction projects usually amount to about 23-24 percent of the total project cost. To keep the math simple, let’s say that a prevailing wage law results in a 10 percent raise for construction workers in a given region. At most, that would increase total cost by 2.5 percent. A 2.5 percent cost can be easily offset by the efficiencies gained from paying the highly-trained workers you attract with a prevailing wage. Trained, skilled workers mean higher productivity along with fewer accidents, errors and change orders.

The overwhelming body of research shows a strong positive connection between prevailing wages and economic development. Prevailing wage laws increase consumer demand, helping to build a strong middle-class community. That helps more than just those families. For every dollar spent on a prevailing wage project, $1.50 is generated for the local economy. In addition, when workers are paid a fair wage, they pay more in taxes and are less dependent on government assistance.

In a state like New York, prevailing wage laws also protect local workers. When developers are forced to pay middle class wages, they hire skilled, local workers instead of trucking in cheap labor from outside the area.

Next time you hear developers make outlandish claims about the devastating impact of a prevailing wage, remember that the only impact they care about is to their own personal bottom line. By not paying fair wages, they’re forcing the rest of us to carry the burden of the inevitable consequences of lower pay and working class poverty. In economics we call this a “market failure” as builders shift costs to taxpayers to keep their wages low and profits high. As taxpayers, we’re the ones left holding the bag.

***
Kevin Duncan is a professor of economics at Colorado State University-Pueblo and has been a visiting scholar at the Institute for Research on Labor and Employment at the University of California, Berkeley.