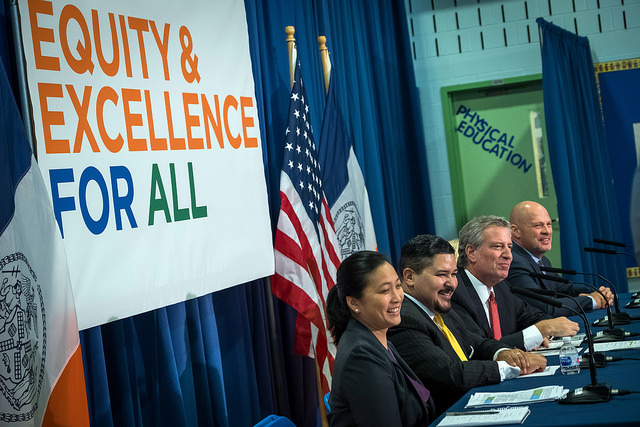 For decades, school and district leaders across the country have struggled to answer a fundamental question: how to turn the tide for our nation’s lowest-achieving schools. Some have resorted to school closures, choosing to start anew and relocate those students to better-performing options. Others have tried to “turn around” underperforming schools, in the hopes that an influx of resources, a greater emphasis on data, and strong leadership could spur improvements in student achievement.

Mayor Bill de Blasio’s Renewal program, in particular, highlighted the promise of that alternative to school districts across the country. Rather than shutter 94 poorly performing schools across New York City, he provided a slew of targeted supports that included additional teacher training, new curricula, extra mental health counseling, and resources from community-based organizations. These additional services came with the conditions that schools set clear goals and remain accountable for sustained improvement.

Over the course of four years, Renewal reflected a clear commitment to supports over school closures and a systems-wide approach; important ingredients of a successful turnaround effort. However, the initiative failed to incorporate input from practitioners and community members, creating a disconnect between policies and ideals—and the actual work of teaching and learning within their classrooms.

Earlier this month, Mayor de Blasio had no choice but to end his $773 million school turnaround experiment, facing scrutiny over not only a lack of local engagement, but the nearly 75 percent of Renewal schools that failed to exhibit significant improvement over four years.

In the wake of this latest setback, district leaders and policymakers across the country are still searching for the answer to this fundamental question. Atlanta Public Schools has shifted to a broader, system-wide effort to elevate all 89 schools in the district. Rhode Island continues to grapple with the ongoing struggles of its turnaround schools, even amid promising practices like common planning time for teachers, culturally responsive curricula, and concerted family engagement efforts. And Tennessee is experimenting with approaches that range from state-run school districts to innovation zones that offer extra resources and charter-like autonomy.

School turnaround remains one of the greatest challenges in education today. Yet, in response to this challenge, we are not using tools and strategies that have actually proven to increase student achievement. Research that my colleague and I conducted last fall shows that only 11 percent of service providers supporting the work of school turnaround have demonstrated evidence of impact.

While some providers may not have been evaluated yet, and others offer consultations or services that are more difficult to measure, the key take-away here is that states and districts are prioritizing partnerships with providers that have never demonstrated evidence their turnaround tools work.

For an issue as intractable as school turnaround, shouldn’t we put our best strategies forward?

First and foremost, we need to recognize that school turnaround begs a system-wide approach, a tenet that Renewal did take to heart. New York City Department of Education officials strove to leverage an ecosystem of partners to support students’ academic, psychological, social-emotional, and basic needs. Renewal’s successor, the Comprehensive School Support initiative, will offer a similar, system-wide approach, leveraging a data-driven system to surface the resources and supports that all students need.

What is still missing from this picture is deep engagement of stakeholders across the school building and broader community. In a system-wide approach, district officials must work side-by-side with principals, educators, school support staff, health providers, out-of-school time providers, and community leaders to establish an overarching change vision for each school.

They must investigate the traditional causes of decline and failure, ranging from significant teacher and leader turnover to chronic budget cuts and a lack of community engagement. And they must take on the role of offering the evidence-based, capacity-building tools and resources that this ecosystem of partners needs to successfully off-set those root causes.

Most importantly, they must accept that effective school turnaround is a long-term effort, not to be achieved in just three years.

Over time, we have worked with Gallup-McKinley County Schools in New Mexico, one of the largest and poorest districts in the state, which has recorded substantial, enduring increases in student proficiency. And in Ohio, a network of 20 turnaround schools demonstrated significant gains in student achievement.

Undoubtedly, school turnaround will remain one of education’s most difficult challenges. However, we now know it can be done with an attention to system-wide stakeholder engagement, evidence-based tools, and the right supports from our school districts.

Mayor de Blasio and Chancellor Carranza should take note as they make their next attempt at turning around New York City’s struggling schools.

***
Coby Meyers is associate professor at the University of Virginia School of Education and Human Development and Chief of Research for the UVA Darden/Curry Partnership for Leaders in Education, an initiative that has supported effective school turnaround efforts in New Mexico, Ohio, and districts across the country.