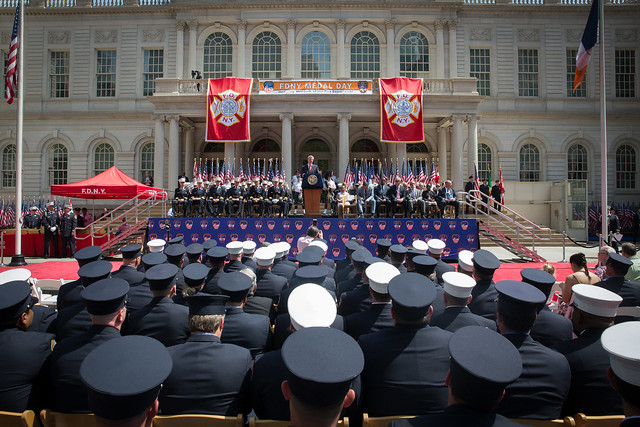 Last week the City Council presented its response to Mayor de Blasio’s preliminary budget for the fiscal year that begins on July 1. It proposes to add $1.5 billion in annual operating expenditures and more than $1 billion in capital spending to the budget proposed by the mayor. Among the proposals are four that would significantly increase spending on the Fire Department and for which there is no clear justification other than political expediency. Two of them would not only be expensive, but would undermine provisions of contracts agreed to through collective bargaining.

First, the Council would add a fifth firefighter to 20 engine companies across the city. Most fire engines are staffed with four firefighters as is the practice in most fire departments across the country.

The 2015 contract with the Uniformed Firefighters Association (UFA) added a firefighter to 20 companies to be phased in over four years, in exchange for agreement that the absentee rate be kept below 7.5 percent. High absenteeism has been a problem at the FDNY, which contributes to high overtime expense.

The trade-off of adding staffing (and hence, new hires) while offsetting some of the cost through reduced absenteeism is exactly the type of mutually-achieved productivity measure that the de Blasio administration proudly touts as part of its approach to labor relations.

Yet last December, when the fifth firefighter was taken off the engines because the absentee rate rose over its agreed cap, the UFA complained vehemently. The mayor reinstated the staffing after there were media reports about the disagreement. Now, the Council proposes adding another 20 firefighters without any linkage to the absentee cap. The location of the engine companies to be increased and/or criteria for making these additions is not specified by the Council.

It is certainly true, as the Council notes, that FDNY call volume has been rising, but the calls are not for fires for which an additional firefighter to stretch out water hoses would be deployed, but for medical emergencies.

Less than 2% of all calls answered by the FDNY city-wide are for fires. The vast majority of calls are for some kind of medical situation. While engine companies answer most of these calls because they can get to them most quickly, they cannot administer most medical services or transport sick people to the hospital, so an ambulance usually must follow the fire engine to these incidents. Therefore, an additional firefighter does nothing to improve or increase response to the vast majority of fire engine runs as the Council implies.

The additional staff would effectively repeal a labor contract provision. Would the Council ever propose to legislatively overrule a contract provision that is regarded by a union as favorable to its interests? Doubtful.

The FDNY most definitely needs to rethink and reallocate staff to adapt to the fact that it has become primarily a medical-emergency, not a fire-fighting, organization. The last thing it needs is more staff who are not trained to administer to medical needs, hired to increase headcount and the number of UFA members. Not only should the mayor reject this proposal, he should direct the Fire Commissioner to re-institute the contractual link between the current five-staff engines and the absentee rate.

Second, the Council wants to add $17 million in capital funding to establish a third EMS station on Staten Island. But EMS runs for life-threatening incidents have grown less on Staten Island than in any other borough over the last year.

Nor is there justification for creating a $32 million firehouse in Hudson Yards. The UFA has been advocating for a station in this new neighborhood since work on the development began. There are EMS ambulances posted in the area and three fire stations nearby. All of the brand new buildings in Hudson Yards have the latest fire safety technology and there is no reason to expect significant increases in fire calls in the area, yet the Council and the UFA want to allocate 45 new permanent firefighter positions, adding more than $4 million to annual FDNY personnel costs.

Finally, there is a call to “re-evaluate public sector wages across the board and plan to correct disparities.” Among the “egregious” disparities noted are those of emergency medical service technicians and paramedics who earn less than firefighters. The Council calls on the FDNY to reset wage rates for its workers.

No cost estimate for this recommendation is included but raising all EMTs and paramedics to the same salaries as firefighters with the same years of service would cost an additional $67.5 million a year, plus an additional $10.5 million in additional costs for increased pension and payroll tax contributions, according to Citizens Budget Commission. This magnitude of expense should not be imposed outside the collective bargaining process, during which other issues like potential productivity offsets can be taken into account.

It is true that the lower salaries and higher workloads of EMTs compared to firefighters are contributing to relatively high overtime and staff turnover. The FDNY needs to be re-engineered to acknowledge and improve its primary function as a medical emergency service; simply paying EMTs and paramedics much more would just be a band-aid on a larger problem, and a very expensive one.

New Yorkers respect and appreciate the valiant service of our firefighters and our emergency medical service personnel. It is possible that some or all of the additional costs of the Council’s proposals could be offset by reducing unneeded, expensive fire stations, and bills introduced by Council Member Joseph Borelli to require ongoing evaluation of the impact of new development on EMS service would provide real data upon which to base future resource allocation decisions. But the Council’s reaction to changed conditions in its budget response is solely to spend more on everything.