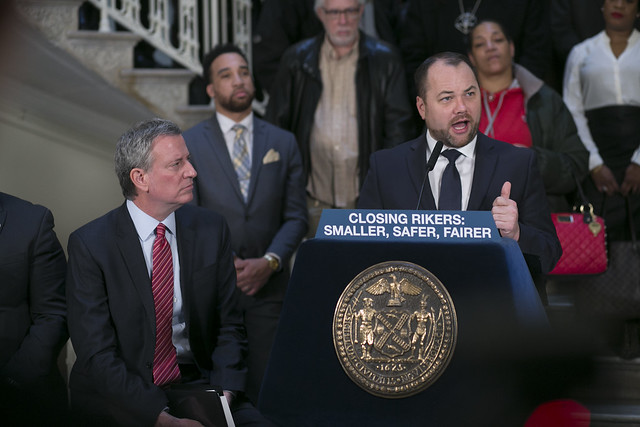 Three years ago, the idea of closing the nine jails on Rikers Island was widely considered impossible. But in April 2017, after an intense campaign by advocates and the findings of an independent commission convened by former City Council Speaker Melissa Mark-Viverito and chaired by Judge Jonathan Lippman, Mayor de Blasio committed to the goal.

Today, we are within hailing distance.

The starting point for closing the Rikers jails is dramatically cutting the number of people who are incarcerated, and we have made real strides towards this goal. Thanks to reforms to policing and prosecution, investments in alternatives to incarceration, and continuing pressure from advocates, there are 1,800 fewer people in city jails than there were two years ago—all while the city remains safer than ever.

The total number of people in jails is now under 8,000, the lowest it has been in many decades and representative of a lower incarceration rate than any other major United States city. Reforms recently enacted in Albany to bail, discovery, and speedy trial laws will reduce that number further and bring us much closer to the goal of 5,000 or fewer people incarcerated that would eventually permit the end of Rikers jails.

But to actually shutter the Rikers jails, and not just talk about it, it is imperative for the city to build a smaller system of facilities located in the boroughs to hold those who remain. Today there are three operating non-Rikers jails, including a 1950s-era tower in downtown Brooklyn and a 30-year-old barge docked in the Bronx that would be closed along with Rikers. None are examples of humane design, and together they have space for fewer than 2,400 people.

New York City has launched the land use process that will determine whether Rikers jails can be shut down. If successful, it will lead to the authorization of four redesigned facilities to hold 5,000 people or fewer in total. Three of the planned facilities—in Brooklyn, Queens, and Manhattan—are on the site of existing jails, next to borough courthouses. The fourth, in the Bronx, is on an NYPD tow pound lot in Mott Haven. The Bronx site is farther from the courthouse than the others, but still exponentially closer and more accessible than Rikers.

Of course, a plan of this scale and impact has critics.

Some say that closing Rikers is impossible. These are the same voices that said, two years ago, that everyone in city jails deserved to be there. They are the same voices that said, five years ago, that ending the policy of widespread stop-and-frisk that was devastating communities of color would lead to an outbreak of crime. They were wrong then, and they are wrong now.

Then there are those who oppose borough facilities for the exact opposite reason. They argue that borough jails would “normalize” incarceration. Nothing could do more to normalize incarceration and to perpetuate a toxic culture of violence and mass incarceration than continuing to warehouse New Yorkers on a hidden penal colony.

Others have said that we must pause this process. But every day that we wait is an extra day that the Rikers jails will remain open, harming the people who work and are incarcerated there. And many who call for delay understand that it would squander the once-in-a-generation opportunity the city has to move towards closing Rikers now, ultimately derailing the project.

Finally, some people who live near the proposed facilities are concerned about the impact on their neighborhoods. These concerns, which include traffic, safety, and size, are understandable and must be thoroughly assessed, and that is what is happening in the land use process now underway. Yet we must remember: there are jails currently operating in downtown Manhattan and Brooklyn without any negative impact to property values or crime.

The plan that the mayor has put forward is an essential step in the path to close the Rikers jail complex. Conversations with communities have already led to initial reductions in the height and density of the planned facilities and more thoughtful plans regarding the treatment of incarcerated women. Moving forward, we expect to see more work from the administration to improve the plan—such as finding non-jail, hospital-based alternatives for people with serious mental health diagnoses—and to address neighborhood concerns.

Equally important, the administration must invest in the socio-economic needs of the communities that historically have been hit hard by the inequities of the criminal justice system. And to demonstrate his seriousness about changing the justice system, Mayor de Blasio should raze the jail on Rikers that he closed last summer.

The land use process that began is necessary to put an end to Rikers, but it is not the end of the road. We will still need to determine crucial issues like how the facilities will be operated and what services and programs they will provide. Finishing the job will require the same focus and advocacy that got us to this point.

The misery of Rikers has been well-known, and well-documented, for decades. The reason those jails continue to exist today is that closing them was always considered too difficult. But to paraphrase John F. Kennedy, we are not doing this because it is easy; we are doing it because it is hard—and absolutely necessary for a justice system that is worthy of our city.

***
Corey Johnson is the Speaker of the New York City Council. Jonathan Lippman is a former chief judge of New York State, of counsel at Latham & Watkins LLP, and chair of the Independent Commission on New York City Criminal Justice and Incarceration Reform.